Once completed the removal of all Tentacles and the Head – and the Parasites – we will be probably ready for the SHIFT. Generally, as you can see from the history, small steps were made almost every day, lately the situation has changed though, small steps in relatively long period of linear time… 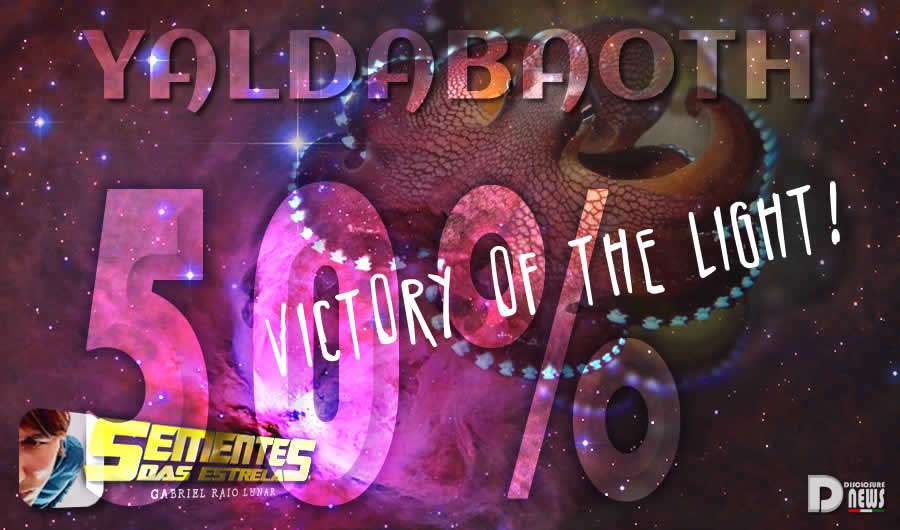 I never said how many tentacles does have the Yaldabaoth entities. My dears, contrary to what many think, we’re not cutting off the tentacles with a sickle, but dissolving all this negative energy into crystalline light.

This entity is a plasma entity that surrounds the Earth, full of Strangelet and Toplet bombs. This vortex is like an octopus and its tentacles extend plasma in interplanetary space, and strangelets bombs are like cancer cells in the body. This vortex is not a dead plasma field, is actually a living being of a negative nature.

The objectives of the Light Forces is to dissolve the entity, take it to the Galactic Central Sun and turn it into elemental essence of pure positive plasma.

Finally, for better understanding, when Pleiades-1 announces something like: Yaldabaoth disconnecting the second tentacle: 99%, this is metaphorical. It means that the entity is gradually dissolving in the Light (this to have a measure in percentage of dissolution) entering a state of crystallization. There are some parts that dissolve more rapidly than others, and hence the idea that makes it seem as if the tentacles are removed manually. But the process itself is unique and involves the whole body in every system.

It’s 10 days I should have written this explanation, but I have not had the time and COBRA gave me the impetus to do so since even COBRA confirmed what I had already understanding.

The so-called „tentacles“ of the Yaldabaoth entity are not really tentacles but actually plasma filaments that are ever shifting and changing and they are not being removed one by one but are all gradually dissolving as the Light progresses.

Thank You Cobra and Gabriel!

Thanks Cobra and Gabriel RL for this clarification. Indeed the publication of our Octopus has gone viral on the web and many people began to wonder if it was really as we have shown.

It was obvious that ours was a stretch, driven mainly by our attempt to illustrate the information Gabriel Raio Lunar, which seeks to transpose into actual data state for removing this plasma entities, transmitted by Pleiades-1. The information that Gabriel receives contains percentages that quantify the current status.

We therefore ask you to interpret our artistic picture of Yaldabaoth just as an artist concept, which seeks to transpose images of channeled information. We will continue with our octopus, if these information will be provided, because we think it important to keep a track of the progress in the removal of this entity.

The negative plasma Octopus connected to the Earth. It is a being made of plasma energy. One of the fallen angels on Earth mentioned in the Scriptures.

It’s kind of chief to the Archons. It controls humanity using most of the plasma of our Solar System.

This entity came from a particular sector of the Andromeda galaxy, and, through Orion, eventually ended up in this solar system and our Planet.

This plasma entitiy is slowly disintegrating, or rather transformed into pure light, as the Light Forces are proceeding to dismantle/deactivate it.

In the Ophite and Sethian systems, which have many affinities with that last mentioned, the making of the world is ascribed to a company of seven archons, whose names are given, but their chief, “Yaldabaoth” (also known as “Yaltabaoth” or “Ialdabaoth”) comes into still greater prominence.

In the Apocryphon of John c. 120–180 AD, the Demiurge arrogantly declares that he has made the world by himself:

Now the archon (ruler) who is weak has three names. The first name is Yaltabaoth, the second is Saklas (“fool”), and the third is Samael. And he is impious in his arrogance which is in him. For he said, “I am God and there is no other God beside me,” for he is ignorant of his strength, the place from which he had come.

He is Demiurge and maker of man, but as a ray of light from above enters the body of man and gives him a soul, Yaldabaoth is filled with envy; he tries to limit man’s knowledge by forbidding him the fruit of knowledge in paradise. At the consummation of all things all light will return to the Pleroma. But Yaldabaoth, the Demiurge, with the material world, will be cast into the lower depths.

Yaldabaoth is frequently called “the Lion-faced”, leontoeides, with the body of a serpent. We are told also that the Demiurge is of a fiery nature, the words of Moses being applied to him, “the Lord our God is a burning and consuming fire,” a text which Hippolytus claims was also used by Simon.

In Pistis Sophia Yaldabaoth has already sunk from his high estate and resides in Chaos, where, with his forty-nine demons, he tortures wicked souls in boiling rivers of pitch, and with other punishments (pp. 257, 382). He is an archon with the face of a lion, half flame and half darkness.

Under the name of Nebro (rebel), Yaldabaoth is called an angel in the apocryphal Gospel of Judas. He is first mentioned in “The Cosmos, Chaos, and the Underworld” as one of the twelve angels to come “into being [to] rule over chaos and the [underworld]”. He comes from heaven, his “face flashed with fire and whose appearance was defiled with blood”. Nebro creates six angels in addition to the angel Saklas to be his assistants. These six in turn create another twelve angels “with each one receiving a portion in the heavens.”

Because we feel guilty of using an Octopus, a very intelligent animal, friendly with divers if treated with respect and capable of amazing interactions with humans, we want to share the Octopus symbol meaning from the site Wobba-Jack.com

The Octopus is considered among the most intelligent marine animals, except the mammals.

From some studies it seems that these animals can make out shapes, unravel mazes and remember events.

Related to the Dragon, Spider, Spiral symbolism; it is suggested as a thunders symbol, or as depicting lunar phases; it is associated with the zodiac sign of Cancer, the depth of the waters and the Summer Solstice, the malefic Janua Inferni (Hell’s Doors).

In the Celtic and Scandinavian art the arms of the Octopus are straght, but in Minoan and Mycenean representations the arms are coiled and take on the symbolism of the Spiral,

The Octopus if oten accompained by the Svastika..

We are working hard, and every day, to keep this blog. Like you we are fighting for the truth. If you want to work with us you are welcome, please email us!

The blog costs are at our expense, advertising reimburse us very marginally so if you like our work and find it useful buy usacoffee clicking the donation button below that will directu to your PayPal.