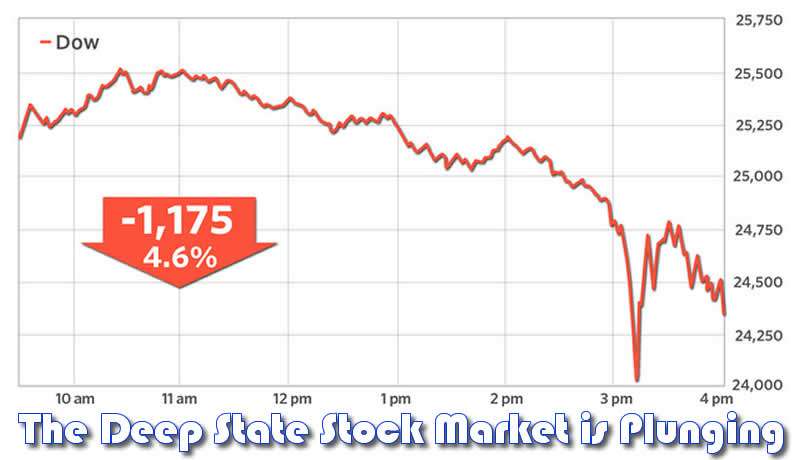 The Deep State Stock Market is Plunging. By Geopolitics.

The global stock market is plunging.

The Dow index tumbles to its lowest 1-day decline in history, -1175 points.

The rest of the global market are all in the red.

This must be the beginning of the end for the Wolves of Wall Street.

There is suddenly stock-market carnage on Wall Street, shattering what has been a protracted period of low volatility and a mostly uninterrupted climb toward the moon for stocks.

There was no clear-cut catalyst for the decline, which came as the long-running rally fueled by improving corporate earnings and strengthening U.S. and global economic growth accelerated in January.

There was no clear-cut catalyst for the decline?

How about asking who controls the stock market?

These so called expert financial analysts tend to give us their analyses based on a false notion that the stock market acts according to the will of the market, or funnier, as if the stock’s volatility is an Act of God, or force majeure.

That is only accurate if the Wolves of Wall Street are acting like gods, which is really the case indeed.

The rigged Deep State casino can drop its own butt anytime it wants and as it deem fits, and to shred itself of the financial cholesterol that’s been sagging all along. But is this the final death knell to the Deep State economy?

The ongoing carnage will be used to launder their fiat money into asset-based currencies, with an added benefit of serving as a pretext for more austerity and draconian measures against the Western population.

This is done in parallel with the continued operation to provoke Iran to be hostile against its own misguided people, i.e. those who attempted a full scale riot a few weeks ago at the direction of the Deep State CIA, so that the mercenaries could finally come in which is really a long shot by this time. 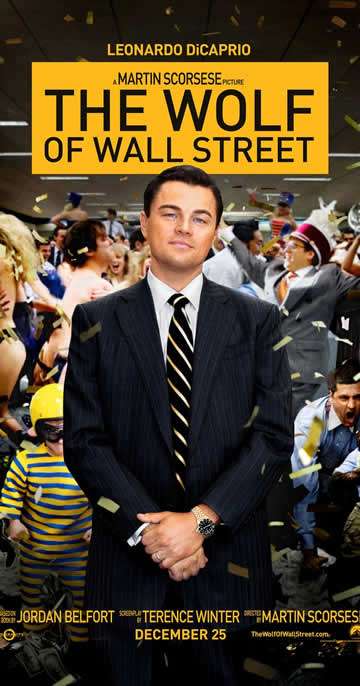 The US Pentagon’s posturing against Russia by sending a reconnaissance plane and a frigate along its border, or the recent shooting down of the latter’s Su-25 plane with a MANPAD, and Trump’s continued verbal nuclear tussle with North Korea remain a marketing ploy to create the need for an increased payout to the military industrial complex.

America need only worry about the football, which is already competing the Nunes memo conversation.

One can only ask, what part of the real economy is still operating right in the heartland.

Meanwhile, China targets the year 2020 when poverty is eradicated completely.

To date, they have already elevated the living standards of about 800 million of its population.

This is hardly surprising considering that the real economy of China will continue to operate in order to accommodate its own domestic requirement and that of the Eurasian landscape.

But why is the Hang Seng stock exchange mirroring the Wall Street carnage? 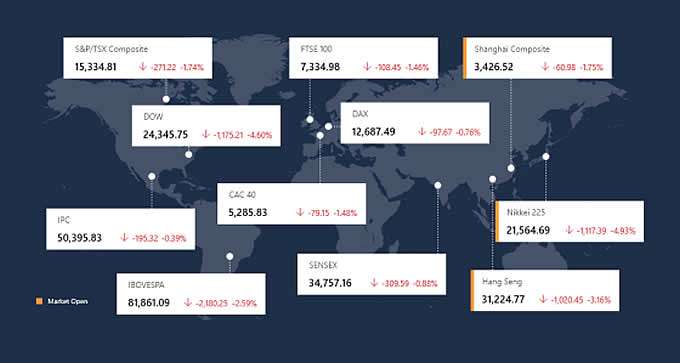 The answer is simple.

They have a separate National Bank for its own infrastructure activities, and another banking system that is interfacing the Western casino.

The Hang Seng stock exchange is part of that Western financial system.

In short, no matter how the Western Oligarchy plays its hand, it would only be hurting itself, or more precisely, its own people.

What if this is really the beginning of the end of the western fiat system?

The move to end the fiat dollar’s dominance in the forex is an ongoing process, and it’s gaining more momentum this year.

But the Deep State could always transfer their assets elsewhere, which in effect leaves the local economy in tatters.

It is therefore illogical to just let other countries do the actual offensive while the affected populations remain apathetic to their own situation.

A real global reset will not just involve the Eastern countries, but the other side of the hemisphere, too.

Again, we reiterate our simple observation: the mass arrest is yet to happen, and the low level pedophiles are the ones being arrested. In fact, Ben Fulford even reported that the Nazis are joining his group, too.

The rest of the Satanists are still playing their game in the stock market and Bitcoin, too.

The ongoing plunge will continue for sometime until it bottoms out.

Hopefully, this will turn out to be an impetus instead, to rise against the Magis lurking behind the scenes.

But that’s a long shot, too.