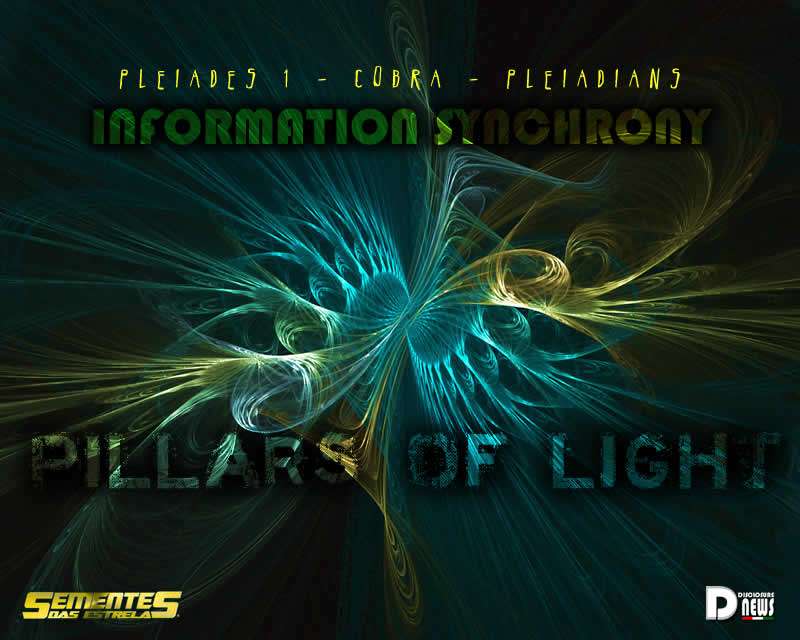 Sometimes it may seem complicated to understand the Pleiades 1 Messages, but other times it’s not that complex.

One of the things that hinders the understanding is our old linear thinking. Linearity is definitely a structure of the old paradigm, the old energy, and it no longer fits the new way of using our cognition.

Explaining in a rudimentary way: the synapses (information passing through thought) do not have a defined linear path within the brain.

Instead, they move around carrying the information to the neurons, which have some kind of “casual” connection to their information, to then close the circuit and complete the idea.

The Pillars of Light are also known as Tubes or Columns of Light.

On the Cobra‘s part, the information is that ” The Forces of Light use advanced technology of Pillar of Light (ATVOR), to solve the primary plasma anomaly …”

The Pleiadians, in this is the message delivered to Gabriel, they stated “we inform you that tubes of Light in light Blue and Violet are being installed throughout the planet in an intensive, at this very moment, in order to accelerate the Process of ‘karmic liberation“.

And, as if that is not enough, we have several recently published photos of the Pillar of Light phenomena. The “official” science has its own explanation for their existence.

This is not surprising, since we know that behind the so-called “official” science there are the dark Cabal, the Archons, the Khazarians … They all, have their explanations, for everything.

In addition, the Pleiadians said in their same message that “(…) Some more sensitive people will be able to see the installation of these tubes of Light throughout the planet, like lightning coming down from the sky and settling on the surface“.

And, one might ask what is the meaning or function of the Pillars of Light. According to the Bulletin of the Pleiadians, they “… accelerate the process of ‘karmic liberation’. This will trigger situations, for some, a little agitated, just so that karmic processes still ‘dormant’ come immediately to the fore. Naturally you will strengthen your ties with those with whom you have more ‘complicated’ karmic ties, if you do so lovingly and comprehensively. The intention is not to create conflicts, but rather to accelerate certain processes that will more rapidly trigger the rise of the Planet as a whole “.

In contrast, direct methods attempt to solve the problem by a finite sequence of operations. In the absence of rounding errors, direct methods would deliver an exact solution (like solving a linear system of equations. Iterative methods are often the only choice for nonlinear equations. However, iterative methods are often useful even for linear problems involving a large number of variables (sometimes of the order of millions), where direct methods would be prohibitively expensive (and in some cases impossible) even with the best available computing power.

The plasma anomaly cited by Cobra, which seeks to solve, is precisely the energy implanted on the planet that triggers this state of pain and suffering to which humankind has been subjected throughout the times.

It is a subject that has already been widely explored by Cobra.

In this article, for example, explains that “The primary anomaly is the root cause of all suffering, where all the negative actions of all sentient beings are in a chain reaction of generational trauma, originating from the original fall of grace, The original encounter with the primary anomaly, millennia ago, and the original experience of the deployment process in this distant past“.

However “All this will be solved as a result of the energetic intervention of the Galactic Central Sun“.

We infer, therefore, that the primary function of the coming Pillars of Light is to help in the process of liberation of mankind from what we know as implants and all other maladies related to these plasma anomalies, which holds the planet in quarantine.

The avalanche of transmuting energies that circle the Planet is notorious. The Beings of Light that accompain this process have brought abundant information about it.

There is a recent channeling by Gabriel, in which Ashtar Sheran brought a great encouragement to our life, particularly to love, so worn by the karmic energies, he said: “This is the right moment to share with you some information, thanks the intense energies that have bathed the Earth in the last few months, and will continue. You have perceived an intense acceleration of events in your life… You will begin to give yourself more attention, affection and Love, as these new magnetic waves will have a “look in” effect and value your own Innate gifts. (…)“.

Thus, we can say that we are effectively being bathed in the long-awaited energies of Light. It is left to us to surf in these waves, with lightness. And… to be happy !!!