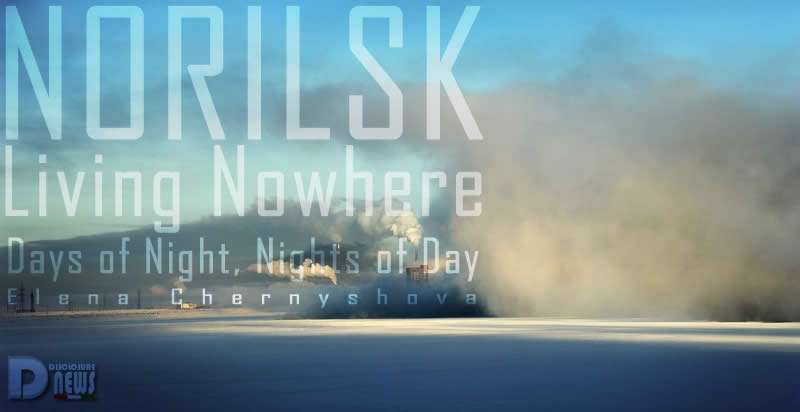 “Days of Night/Nights of Day” is about the daily life of the inhabitants of Norilsk. Norilsk is a mining city, with a population of more than 170,000.

It is the northernmost city (100,000+ people) in the world. The average temperature is -10° C and reaches lows of -55° C in the winter. For two months of the year, the city is plunged into polar night when there are zero hours of sunlight.

The entire city, its mines and its metallurgical factories were constructed by prisoners of the nearby gulag, Norillag, in the 1920s and 30s. 60% of the present population is involved with the city’s industrial processes: mining, smelting, metallurgy and so on.

The city sits on the world’s largest deposit of nickel-copper-palladium.

Nearly half of the world’s palladium is mined in Norilsk. Accordingly,

Norilsk is the 7th most polluted city in the world.

This documentary project aims to investigate human adaptation to extreme climate, environmental disaster and isolation. The living conditions of the people of Norilsk are unique, making them an incomparable subject for such a study. 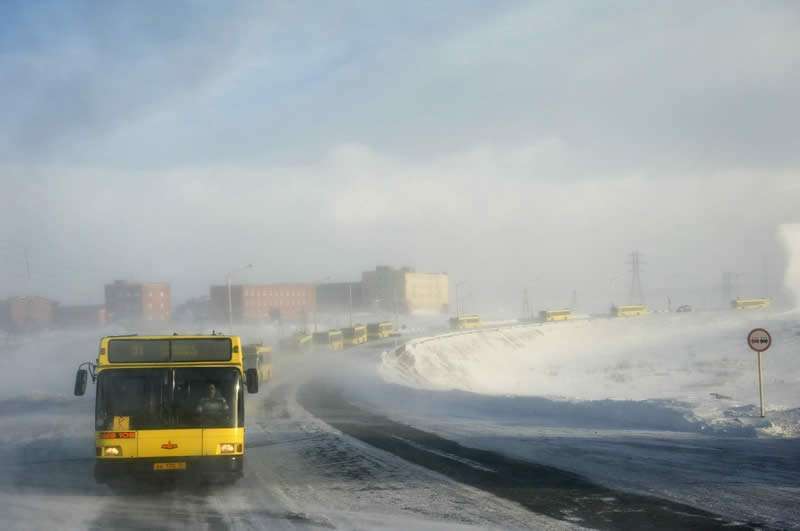 During the winter even a simple journey can be transformed into a full-blown expedition. Most jobs are situated along roads which cross open spaces of tundra. During a snowstorm, public transport consists of processions of 15-20 buses. If one bus tips over or breaks down, the passengers can be evacuated to another bus. This convoy circulates 2-3 times a day. © Elena Chernyshova 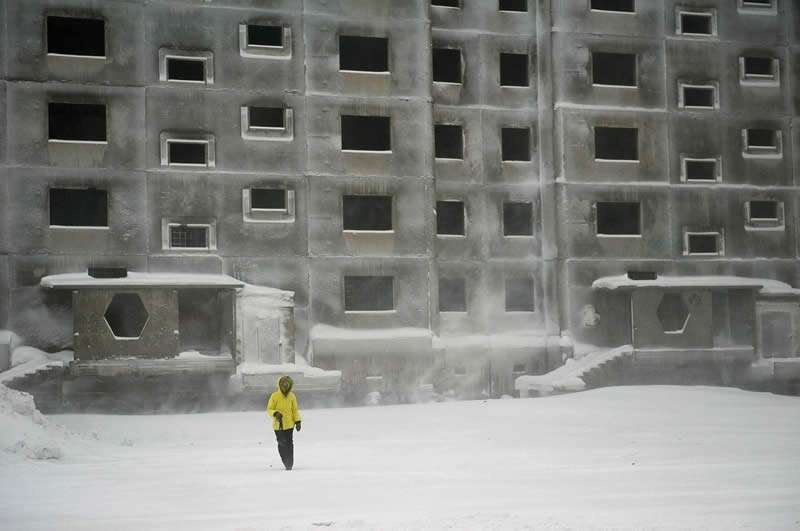 The construction of new quarters of Norilsk was initiated only a few years before perestroika. The fall of the USSR disrupted the flow of funds. Thus, construction of several buildings was “frozen.” For 20 years, these buildings have remain unfinished and abandoned. © Elena Chernyshova 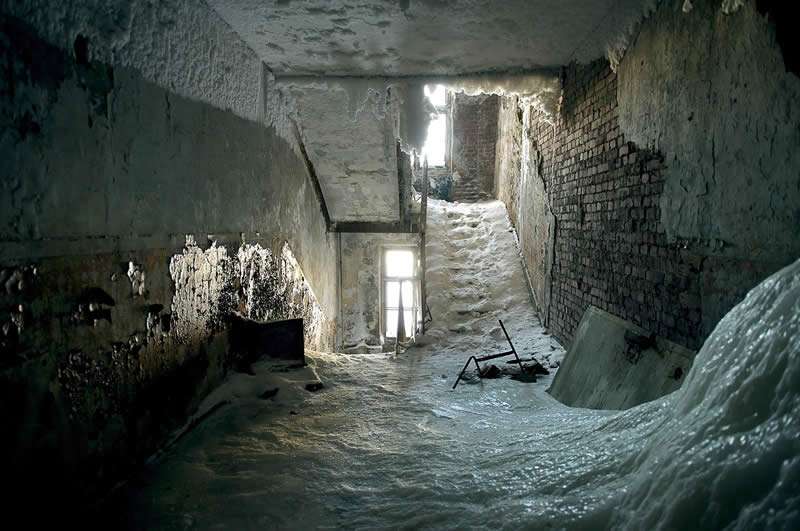 Norilsk is facing a big problem of maintaining its buildings. Thawing of the upper layers of permafrost has caused instability in the pilings and has led to the destruction of buildings. This is aggravated by a negligent maintenance of the sewer system, the constant leakage of hot water, and the global elevation of temperature. © Elena Chernyshova 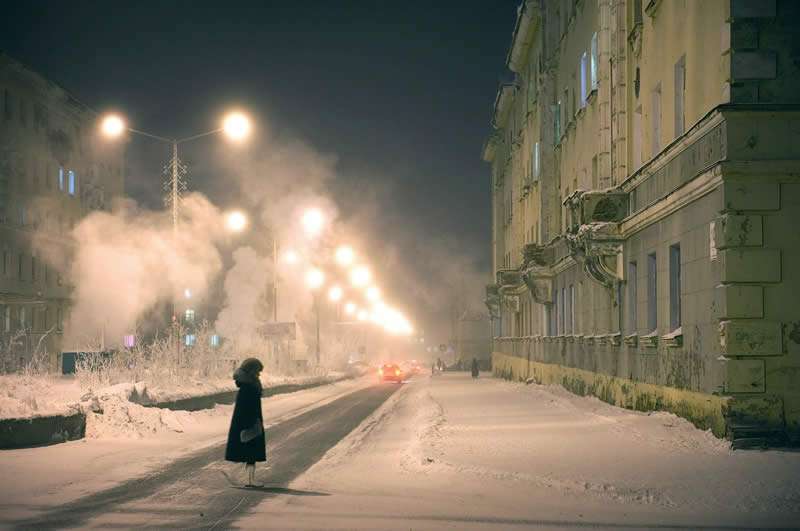 During a hard frost, the temperature can go under -55° C. Steam rises from collectors, transforming the space with a thick fog. © Elena Chernyshova 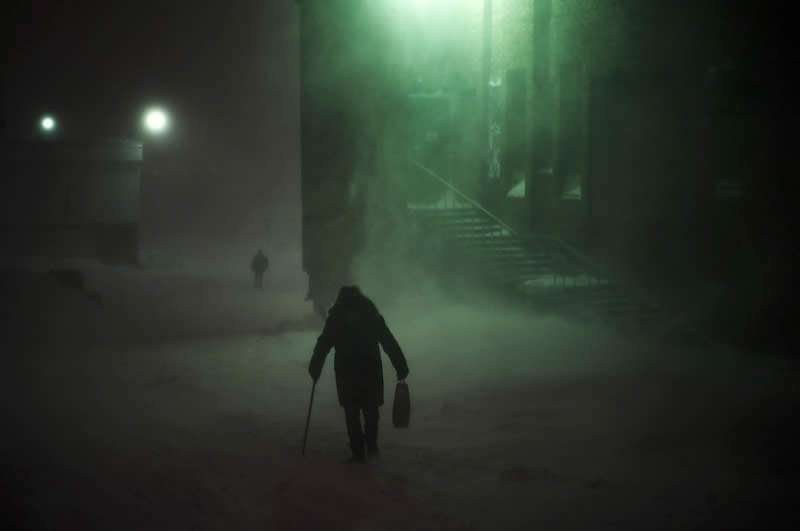 Winters are long, with average temperatures of -30° C and more than 130 days of snowstorms. © Elena Chernyshova 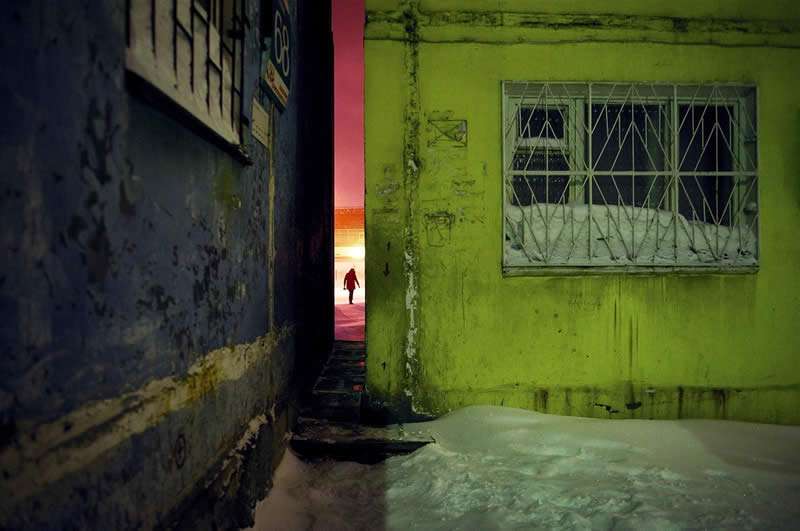 The city’s architects tried to create an urban space that could protect the inhabitants from the area’s violent winds. Thus, the buildings are grouped together to form enclosed courtyards. To insure good circulation, architects planned very narrow passages between buildings. © Elena Chernyshova 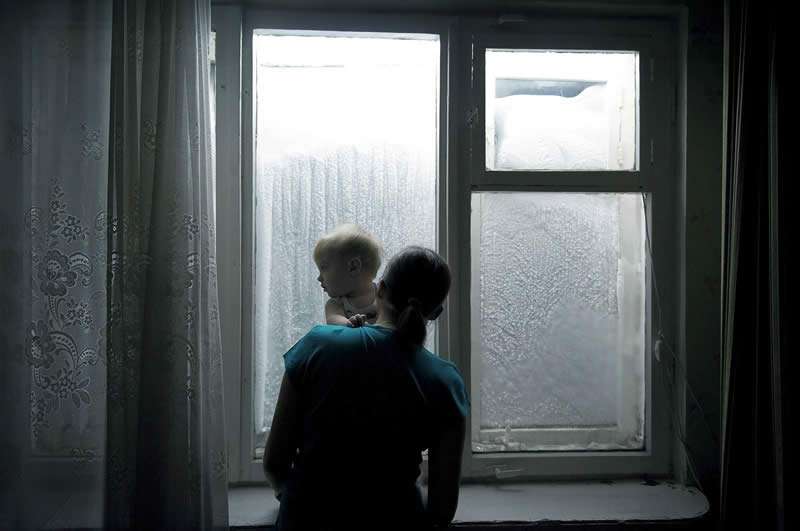 During a two-month period in the winter, the sun doesn’t rise above the horizon. This polar night means that the body is deprived of melatonin-giving light. This can lead to a loss of deep sleep, irritation, fatigue and depression. Most apartments in Norilsk are equipped with UV lamps to simulate natural light. © Elena Chernyshova 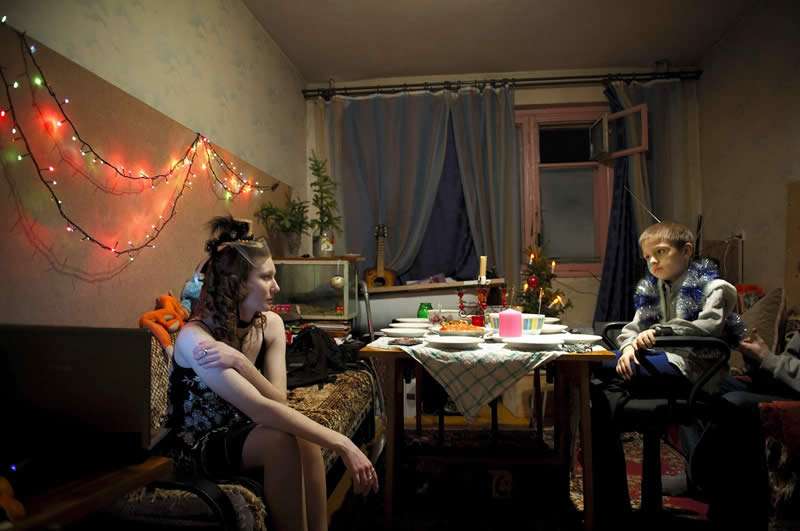 In the winter, it becomes difficult to break the daily rhythm of “home-work-home”. The extreme outdoor conditions don’t facilitate activities besides those which happen inside. Thus, a major part of life occurs in confined spaces. © Elena Chernyshova

Inhabitants of the city find themselves lacking vegetation during the 9 month winter. They try to create green oasises in their apartments, defying the harsh climate and industrial environment, in the hopes of providing themselves a visual escape. 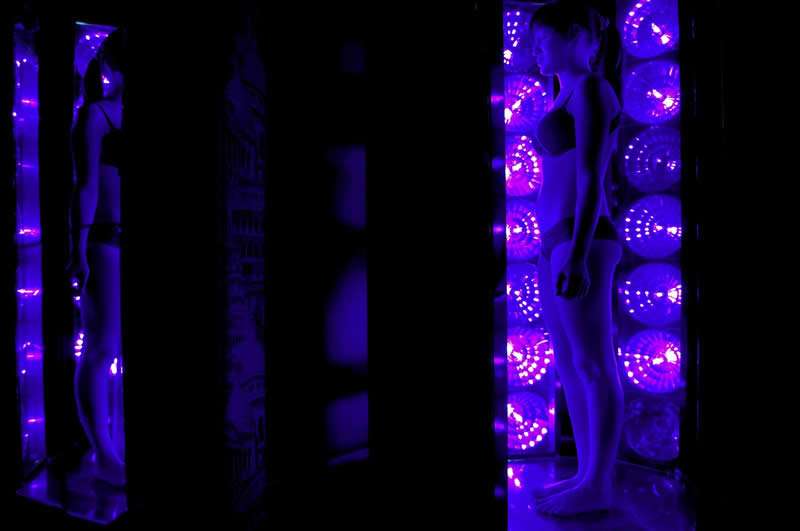 The best way to resist the depressing influence of polar nights is to expose yourself to bright light. In the 1950s, luminotherapy became popular. In school, children were taken for their daily “sunbath” in front of a UV lamp. Nowadays, solariums are widespread and are highly appreciated by the inhabitants of Norilsk. They are quite cheap and accessible to everyone. © Elena Chernyshova 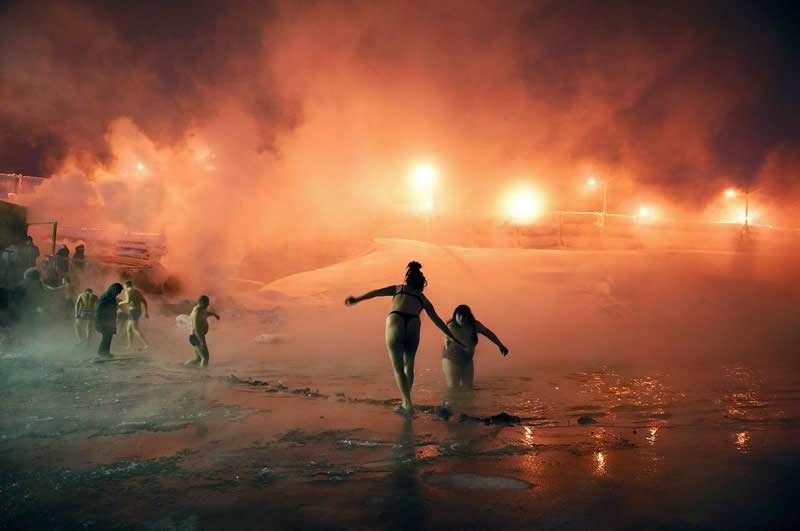 Ice swimming is one activity that people undertake to cope with the winter, even on days when the air feels -40° C. After diving into ice holes, swimmers warm up in small banyas (saunas) heated with the steam from the power plant. © Elena Chernyshova 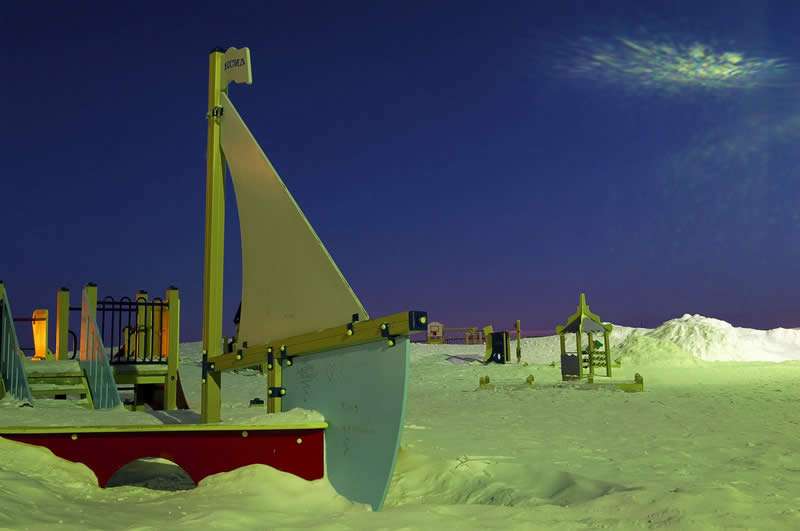 In kindergarten, a special table is used to compare the temperature and the speed of the wind. If the value is too low, the children are forbidden from going outside. Sometimes children have to spend several months indoors. © Elena Chernyshova 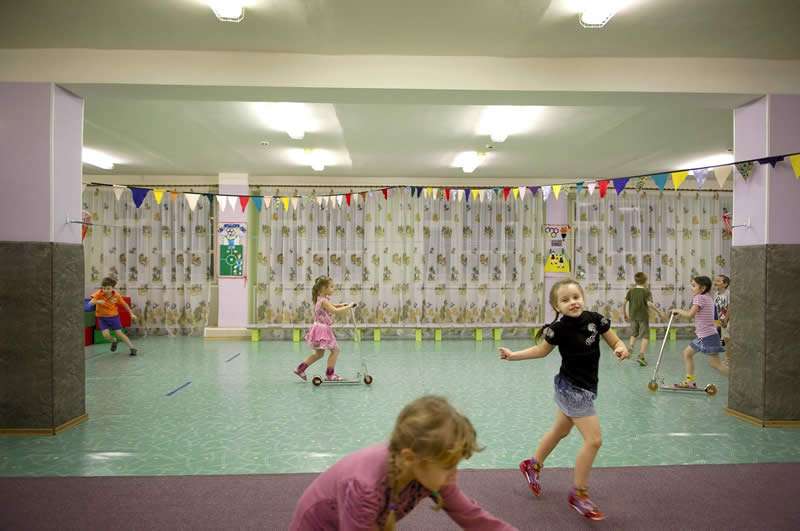 To compensate for the fact that children often spend months indoors, the schools have large closed spaces. This allows the children to enjoy such activities as cycling and running. © Elena Chernyshova 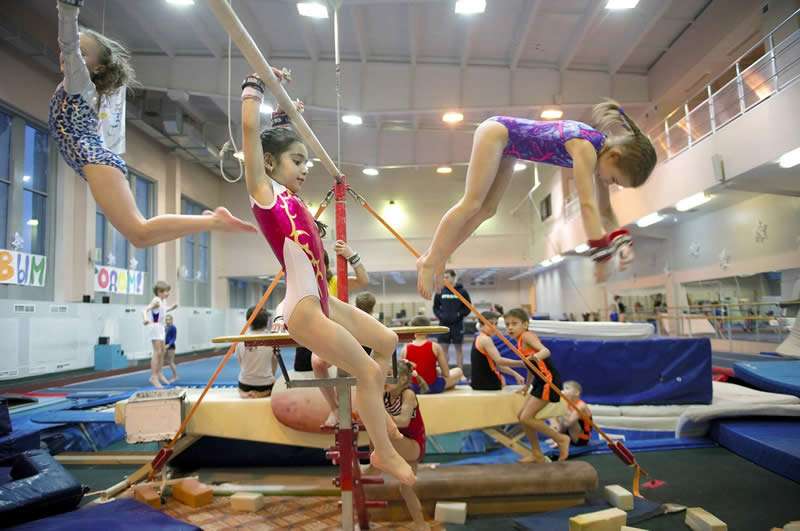 In Norilsk, sports are very popular since sports are the best way to stay healthy in such harsh conditions. Several Russian champions in gymnastics, figure skating, skiing and swimming have hailed from Norilsk. The city offers many opportunities for sports, with swimming pools, gyms, indoor football fields, ice rinks and so on. © Elena Chernyshova 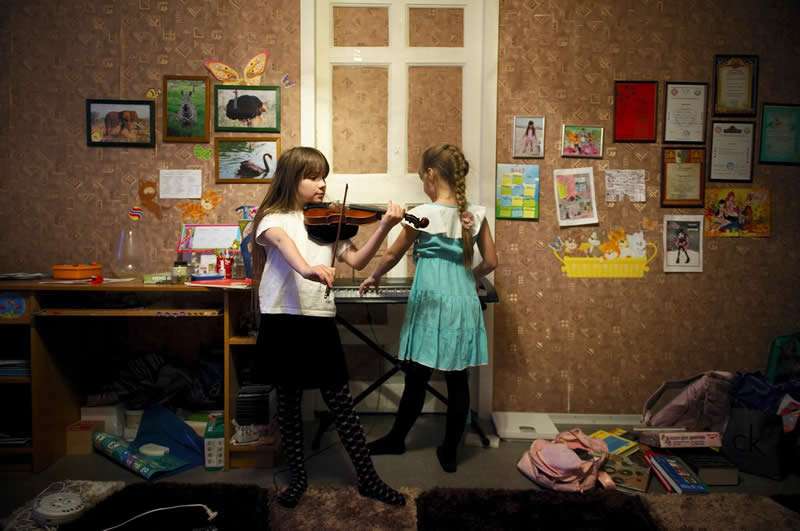 “Aktirovka” is a magic word for the schoolchildren of Norilsk. It means that due to weather conditions, the children should not go to school and get to stay at home. Homework is sent by the teachers using text messages. Days of “aktirovka” may continue for a week or more. © Elena Chernyshova