Our material Universe Nebadon, is a universe that is within a cluster of three material universes.

The Nebadon universe is the Primary within this material Cluster, and from it, two other material Universes have also developed.

Our material Universe, as the name itself says, is a Universe made so that mainly experiences of duality occur, as well as for the essence to be able to touch itself in the materiality.

It is a “solid” universe, of energies much more condensed than the other Universes, as for example the Crystalline and the Magnetic.

This does not mean that it necessarily has to be negative, but only has a greater condensation of the particular energies and characteristics offered.

This Universe is one of the greatest possible ranges of experiences and possibilities of self-expansion, since the variety of available possibilities/experiences is incalculable, enabling beings to accumulate experiences and, along with them, an expansion of consciousness and Light as in no other.

It is one of the greatest “faculties” of high-learning throughout Creation.

All things in this Universe are widely empowered.

If a being has the attention in the Light, it will be increased, if it has in the shadow, the same, allowing an access to the extremes and in these extremes to extract the maximum of the experiences and sensations, that inevitably elevates the being to a deep state of expansion, knowledge and wisdom, also leading him more quickly to an even deeper reconnection with Primary Energy (Source Where It All Is Originated).

Moreover, this is the Universe that concentrates energies of all others in their most varied forms and vibrations.

Just as, it is the Universe “Mother of all”, because here the beings of the other universes already mentioned by me in other channeling, when they wish to have deeper and more elevating experiences move to this cluster of material universes, being mostly in the Primary, Nebadon, the one in which we operate in this consciousness at this moment.

This is also the Universe where there is the largest inter-universe portal of the entire Cosmos and it is through it that all these consciousnesses enter.

This Universe is also, among all that I have already managed to channel, with a high capacity for regeneration at all levels.

This Universe suffered from the energies of galactic battles for billions of years and was able to regenerate energetically quickly, taking advantage of the energies of the other Universes and using them where they were needed, because, as I said, our material Universe is one that also receives/absorbs energies of all the other Universes in himself, being able to make “mini replicas” of the others within himself, that is, when there is a need for Nebadon to “transform” into Crystalline, he does it quickly, quickly becoming a copy of Crystal Universe. When of the Magnetic, same, and so on, according to necessity.

This is a particularity of the Nebadon Material Universe.

Our Universe is also known elsewhere as “The Chameleon Universe,” as it has a high capacity to change, sustain, adjust, redo, replicate, etc., all kinds of specific vibrations or not.

Our Universe is the oldest among the cluster of Material Universes and has gained this ability over time.

Our Universe is in its material cluster, its hearts, as well as the heart of the deeper experiences of the other universes in their near clusters.

Our Universe is a first superimposed of the cluster of three Material Universes. And honorably the first Universe to have the high capacity to deal with all known and unknown energies throughout Creation.

This Universe is a specialist in forms, whatever they are, and sends signals to all other universes about it.

How to create, maintain and harmonize forms, from the most beautiful to the most “ugly”.

It is the Universe with a high capacity to develop from its forms calculated according to the vibrant energy. In other words it manages to accurately form the solid/physical/materially visible appearance of a particular energy.

Can translate exactly the appearance of energy in all its tiny vibrational peculiarities and this is something which draws many races from other universes, as many of these other want to learn more about this, about this precise and ingenious technique/mathematics.

It is, as the saying already says, “The student who surpassed the master”, because our Material Universe has perfected even more than the mathematician itself, receiving also the title, in addition of Material Universe, of Mathematical Universe.

In addition to other titles such as Nebadon, Chameleon, Experiment (we are also known as universe experiment) and others.

Do you understand why the name “Chameleon”? It fits very well. Our Universe reinvents itself, learns, relearns, expands and reverberates brilliantly!

It is one of the most attractive universes for all known Creation.

Our dear brother, who on earth was known as Jesus, is one of the harmonious leaders of this Material Universe, along with the legions of light of the Archangel Michael and all the councils of the Ancient Masters, active in the 32nd dimension and beyond.

The energy of Jesus acts as if it were a Central Sun in this Universe and reverberates from there to all other systems.

We are also given the mission to reverberate our light into galaxies and all systems wherever we go, and this is a great gift of the Great Energy for all.

We are also representatives of this harmony in the physicality, so we are so called to be in harmony and equilibrium, since a minimal reverberation of ours has a great impact on our Universe, not only in it, but in all the others since we emit powerful special waves to all of them, and as they learn a lot from us here, so let’s take care of what we’re going to teach (smile).

We are these very masters who have chosen to enter the deepest of materiality into a great experience, absorption and reverberation of the tangle of knowledge and special energies that is only found here in this Universe, and to expand our light from here and from all these experiences.

And you, dear master who is reading this channel, you are in it! How fantastic! Congratulations on your choice of experiences!

I would like to bring more information about our Universe, but it is as far as my clairvoyance could see. I could not go any further, but I’m sure somehow we can already catch a glimpse of the grandeur of our Nebadon Universe.

ETER-MAC-IRAMARKI MATEN NEB MIK-A UVERS (Which means = FOR SHAPE, WITH SHAPE, FOR FORM, REFORM THAT TRANSFORMS).

The Geometric Symbol that represents the material Universe is the one that illustrates this publication at the top.

My deep gratitude for the opportunity to convey these truths.

For Truth, nothing but Truth,

In Love and Blessings, 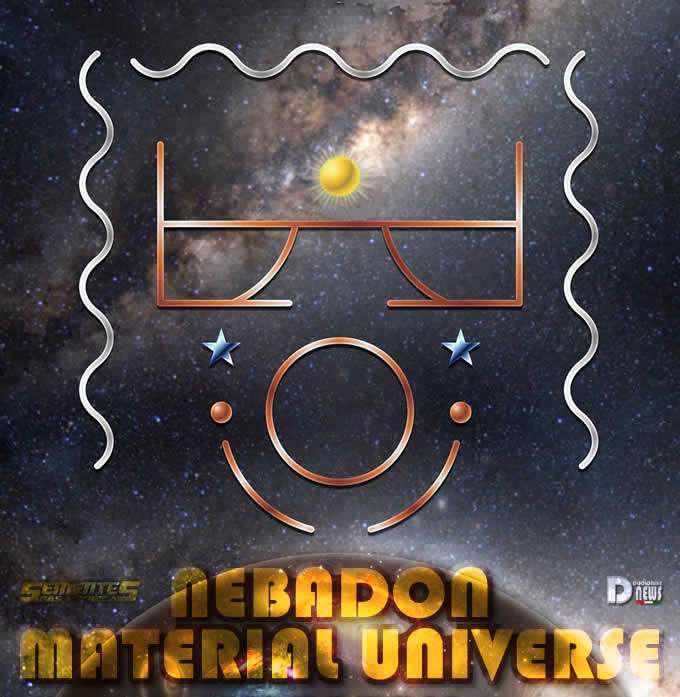