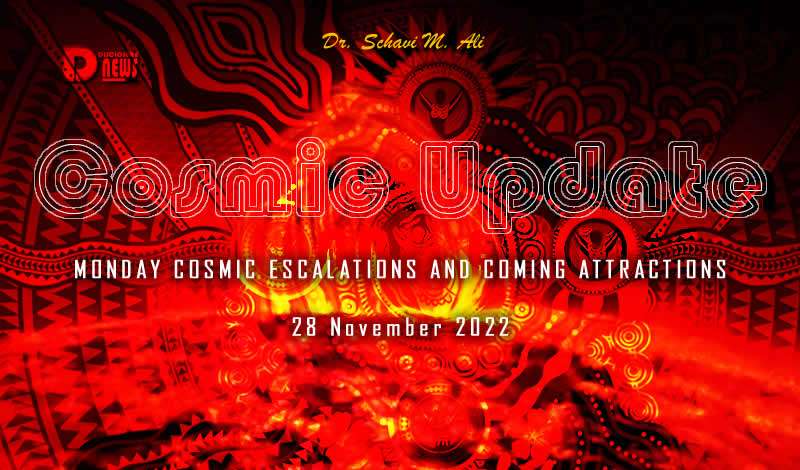 Another powerful solar wind stream is expected on either December 1st or 2nd.

A coronal mass ejection (CME) exited our Sun on November 25th and has now arrived to our planet causing geomagnetic storming which the “National Aeronautics and Space Administration” (NASA) is admitting has been actually occurring ever since the CME blasted off.

Another powerful solar wind stream is expected on either December 1st or 2nd.

A coronal mass ejection (CME) exited our Sun on November 25th and has now arrived to our planet causing geomagnetic storming which the “National Aeronautics and Space Administration” (NASA) is admitting has been actually occurring ever since the CME blasted off.

The “Power” rating (“Schumann Resonance”—vibrational frequency and amplitude of our planet) has not yet been posted; however, with the “KP Index” being “EXTREME” and the solar winds being far above the normalcy that is between 300 and 400 km/s, if the rating is in the single digits or lower double digits on the technological devices, it could not possible be an accurate assessment of the planetary activations.

There have also been 109 earthquakes in the past 24 hours—mostly above “3.0” in magnitude (somewhat low)—but a huge “5.9” has occurred in Portugal today which is obviously almost “6.0”.

The magnetosphere chart of the “National Oceanic and Atmospheric Administration” (NOAA) is showing that very dense particle plasma is doing its usual pressing and enveloping into our planet on all sides—Sun-facing and far side—thrusted in by the CME and high solar winds.

This is a day—due to the geomagnetic storming from the cosmic events occurring—when activations to the creations on our planet (which of course includes humanity) may be as intense as they are for “Mama Earth/Gaia”.

As the Full Moon prepares for arrival on Wednesday, December 7th at 11:08 PM (EST), cosmic events will likely intensify.

Also, this is the same day that Mercury begins its “pre-shadow” in preparation for its retrogradation from December 29th to January 18th of 2023.

Mars will move direct from its retrograde (which began October 30th) on January 12th of 2023; and as a reminder, whenever a planet goes retrograde or direct–for a few days on either side—its energy is magnified.

Mars is the planet of tendencies of aggression, easy to anger, warfare, and in a natal chart it represents the place where energy is most focused relative to what that particular horoscope “house” characterizes.

Thus, early in 2023, there may be an intensification of global political unrest and its affects.

Mercury Retrograde will initiate a review, reflection, and re-doing of plans and policies which will satisfy some leaders and citizens and dissatisfy others—the same old dualistic tendencies.

However, with Uranus—the planet of sudden upheaval and surprises governing Aquarius and with its ancient ruler being Saturn which gives hard lessons, discipline, removals, restrictions, and the need for serious organizational structure—there will be some modicum of struggle as global negotiations occur and as some groups will still refuse to cooperate.

Mercury going direct will give an “introduction” to the coming detailed “chapters” of the “book” that global leadership is “writing”, and the general international populace will either “praise” or “ban” the “book”.

Reviewing “coming attractions”, with the Full Moon on its way, with the pre-shadow of Mercury Retrograde coming, with Saturn in Aquarius, with our Sun aligning with the “The Great Attractor” (which is bursting with LIGHT (both at the Sagittarian point), with Mars still retrograde, and with numerous other cosmic events happening such as “Upheavaling Uranus” in stubborn, opinionated, financially-focused, but also beauty-oriented and intelligent Taurus; with “Healing Chiron” in fiery Aries; with potent CMEs, with a daily plasma enveloped magnetosphere, with very high “KP Index” ratings, and much more, Earth/Gaia will—to quote the way in which music was characterized in the 1950s and 1960s—“shake, rattle, and roll”!

The activations/symptoms of escalated LIGHT comprise your “ticket” to the show. Sitting in the “calm” section of the “Cosmic Auditorium” and meditating as the “show” commences (perhaps with your “grounding” prayer malas anointed with fragrant Sandalwood oil) will allow you to “enjoy the show” and to receive its LIGHT with greater ease.

The cosmos is conscious.

All creation has levels of consciousness and of life force—spiritual vibrations. It has been empowered to develop necessary cleansing and illuminating “shows” as SOURCE continues to “Produce” and “Direct” the expansion of “ITS” eternal talent.