Mass Arrests Are They Starting? By Interstellar.

It is circulating the rumor, published by an anonymous user on 4chan, that this weekend we could witness the start of the arrest of major members of the Cabal, such as the Podestas.

It’s not the first time that we hear these rumors, they seem to be recurring, but it does not mean it cannot happen, one day it will happen for sure and the post on 4chan is giving us some dates, so we can check it out soon. 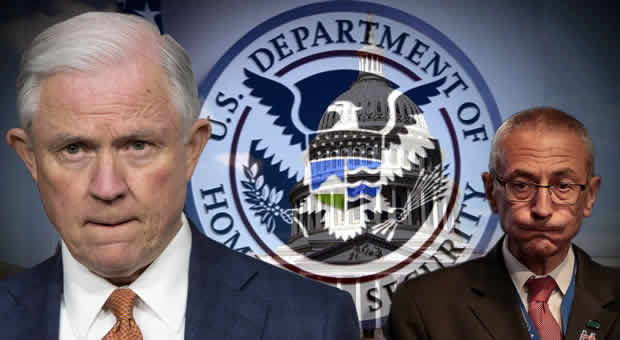 For the sake of precision, this anonymous, which seems to be well-informed, announces that today, November 4, there may be the arrest of one, or both, of the Podesta and that the news will be given to the public in the coming days. The post continues, revealing that violent protests will be organized to prevent further arrests. They will try to create as much division as possible.

The POTUS in this case would order martial law, and exceptional measures would be taken to deal with what would happen if mass arrests begin.

You can read the details of the post below.

We want to highlight some facts happedend these days.

Given that Trump uses twitter for most of his communication to the people, strangely there has been a problem on that twitter account right in recent days.

The WikiLeaks site has been subject to DDos attack, always in recent days, and has been blocked for some time.

Trump flies in Asia, potentially safe, and to end up the whole stragness, at the White House there has been an unknown alarm that has completely isolated it. This intervention on the White House could have been put into effect by the Deep State’s factions, but also by White Hats for opposite reasons, we’ll see if something happens next.

In any case, from many sources, we have had warnings for some time now, to be prepared for an autumn of astonishment and turmoil. The suggestion is not to be intimidated from the possible news, turn off the television, and if you can’t, flip the news upside down in the search for the truth, it’s easier that the truth is opposed to what the Media Mainstream tell us.

It seems, or we do hope, that the situation might begins to change quite soon and these news can only confirm that we are at the verge of the change.

My fellow Americans, over the course of the next several days you will undoubtedly realize that we are taking back our great country (the land of the free) from the evil tyrants that wish to do us harm and destroy the last remaining refuge of shining light.

On POTUS’ order, we have initiated certain fail-safes that shall safeguard the public from the primary fallout which is slated to occur 11.3 upon the arrest announcement of Mr. Podesta (actionable 11.4). Confirmation (to the public) of what is occurring will then be revealed and will not be openly accepted. Public riots are being organized in serious numbers in an effort to prevent the arrest and capture of more senior public officials.

On POTUS’ order, a state of temporary military control will be actioned and special ops carried out. False leaks have been made to retain several within the confines of the United States to prevent extradition and special operator necessity. Rest assured, the safety and well-being of every man, woman, and child of this country is being exhausted in full. However, the atmosphere within the country will unfortunately be divided as so many have fallen for the corrupt and evil narrative that has long been broadcast.

We will be initiating the Emergency Broadcast System (EMS) during this time in an effort to provide a direct message (avoiding the fake news) to all citizens.

Organizations and/or people that wish to do us harm during this time will be met with swift fury – certain laws have been pre-lifted to provide our great military the necessary authority to handle and conduct these operations (at home and abroad).

POTUS will be well insulated/protected on AF1 and abroad (specific locations classified) while these operations are conducted due to the nature of the entrenchment. It is time to take back our country and make American great again. Let us salute and pray for the brave men and women in uniform who will undertake this assignment to bring forth peace, unity, and return power to the people.

It is our hope that this message reaches enough people to make a meaningful impact. We cannot yet telegraph this message through normal methods for reasons I’m sure everyone here can understand. Follow the questions from the previous thread(s) and remain calm, the primary targets are within DC and remain at the top (on both sides). The spill over in the streets will be quickly shut down. Look for more false flags – stay alert, be vigilant, and above all, please pray.

“For God so loved the world that he gave his one and only Son, that whoever believes in him shall not perish but have eternal life. Love is patient, love is kind.”

Mass Arrests Are They Starting?, 4chan