Many ask why the governments, our own government, would modify the weather in a way that does immense harm to our own citizens and to the life-support systems of the planet as a whole.

Without doing any investigative research whatsoever many choose to completely deny that climate modification could be real and ongoing, with many potential objectives and agendas being carried out.

The programs of weather and biological warfare the US government and the US military have been fully involved in are not just weather modification but hurricane modification.

This is going on for at least 70 years, Project Cirrus was underway 70 years ago. With only 80 kilograms of dry ice profound manipulation of a hurricane was achieved.

How much more effectively can the weather makers now manipulate hurricanes when they have the air power to dump hundreds of tons of patented materials into such storms? 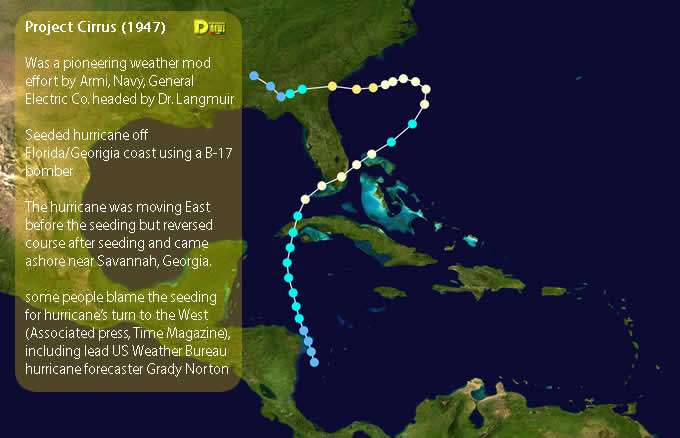 The historical documents shown here is for Project Stormfury which was historically a part of the ongoing and expanding US government and US military hurricane manipulation programs. 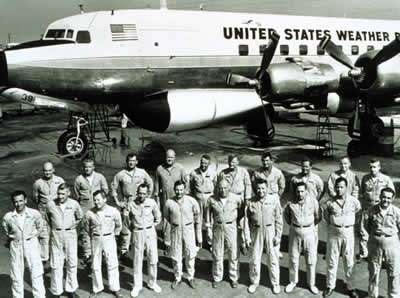 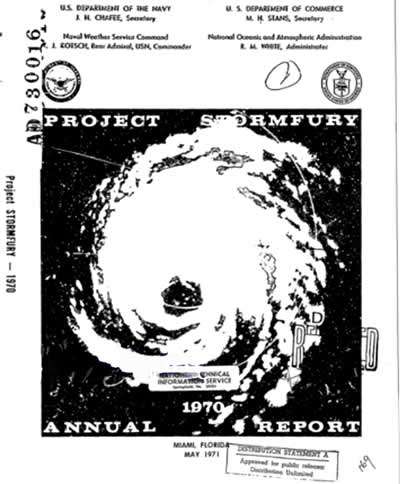 One of the crews and aircraft of the project Stormfury is shown bove, a US military hurricane manipulation project and program.

It’s important to remember that the fully documented weather warfare was already going on by the Vietnam War, with Project Popeye which created catastrophic and continuous flooding over the Ho Chi Minh Trail.

This document excerpt was taken from a 750 page US Senate report that was produced in 1977.

The documents is extremely condamning and can be reviewed in its entirety on geoengineeringwatch.org.

Document of the America Government Activity of Climate Manipulation

This document, with countless others, prove beyond doubt that the US government and US military programs of climate and hurricane manipulation were real ongoing and rapidly expanding.

There are likely many more processes of hurricane suppression and manipulation that are considered classified, in this excerpt from a scientific study on cyclone suppression is stated that when tropical cyclones are saturated with aerosols the intensity is reduced, the flow of energy from warming oceans is reduced and the winds weaken. 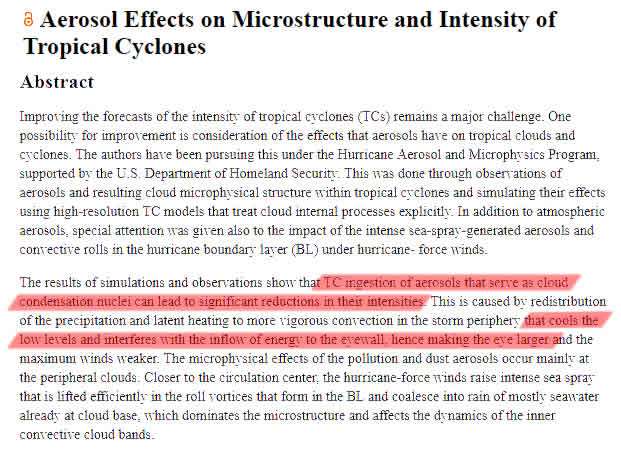 Now let’s consider this, how can atmospheric aerosols be widely dispersed in addition to the use of military tanker?

These nozzles are aimed directly into the exhaust jet stream in order to enforce the completely false official narrative that we are only seeing condensation trails when in fact we’re seeing sprayed aerosol dispersions.

Available data indicates commercial carrier personnel are not directly involved with the climate engineering programs, though these aircraft are absolutely being used.

Aerosol dispersions over the oceans are now constant and blatant, this photo shows the eastern Pacific and clearly reveals aerosol spraying activity. 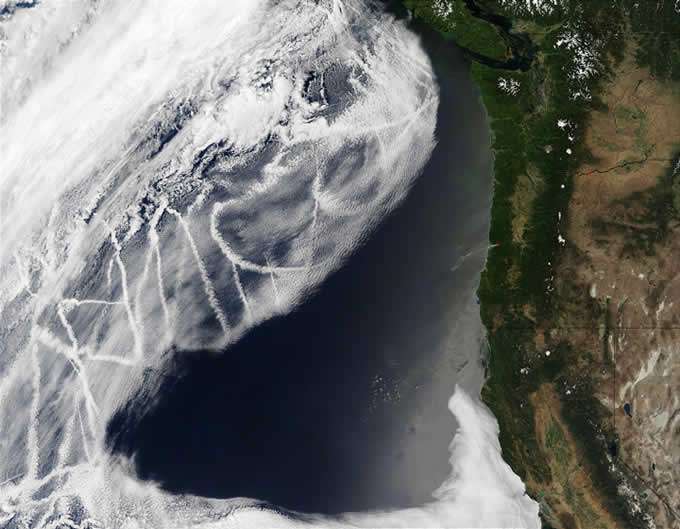 The vast majority of populations have absolutely no idea that the ongoing global climate engineering.

Manhattan Project is tearing the climate and life-support systems of the planet apart, the toxic heavy metal and chemical aerosols are also contaminating our breathable air column and the entire biosphere as a whole.

How can aerosols and radiofrequency microwave transmissions impact the formation of hurricanes?

This NASA satellite image is very revealing, the image was taken off the west coast of Africa a primary location where Atlantic hurricanes form. 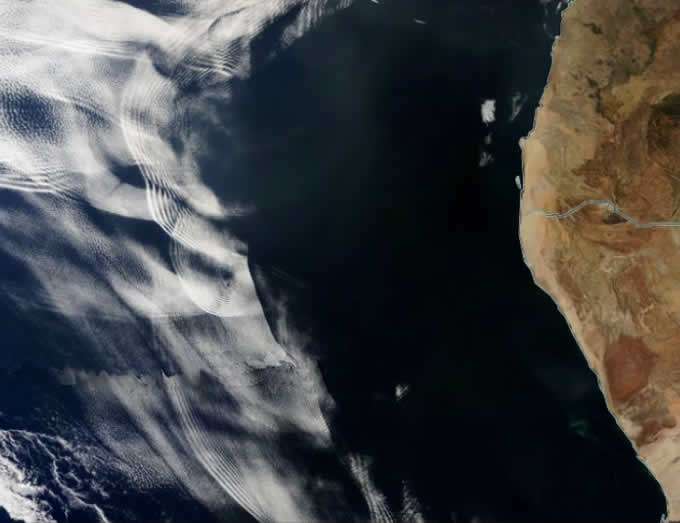 The manipulation of the tropical cyclone formation region is extremely alarming and undeniable radiofrequency microwave transmissions manipulate the electrically conductive heavy-metal nano particulate that have been seeded into the atmosphere in the cloud formations.

The manipulation of these particulates in turn may pile the air masses and thus storm formations.

The climate engineers have been aggressively suppressing and/or redirecting Atlantic and Gulf of Mexico hurricanes for over 12 years, there’s been no major hurricane impact for 12 years.

On this point please hear all the details I’m reporting, I didn’t say there’s been no hurricane impacts for 12 years there have been no major hurricane category landfall in the last 12 years in the US.

Though some might conclude that cyclone suppression is good any such intervention with Earth’s life support and cooling systems is an extremely detrimental practice in regard to the life-support systems of the planet as a whole.

Our rapidly warming oceans are trying to spawn cyclones but the weather makers have long since achieved the ability to decide what develops what doesn’t and what direction it travels.

Who gave the Military Industrial Complex the right to play God with Earth’s climate and life-support systems?

This climate scenario that this image represents is extremely alarming, it’s directly related to Hurricane Irma.

This is the NOAA National Oceanic and Atmospheric Administration departure from normal temperature forecast map or, more accurately, this is the scheduled weather since Raytheon geoengineering contractor.

Raytheon does this modeling for NOAA and the National Weather Service, this map is for September 7th through the 11th 2017 and this map reflects one of the most shocking temperature imbalances yet recorded in the lower 48 states.

This moisture will be scattered inland and utilized for chemical ice nucleation processes, these are patented processes.

The center of the red zones in the West may be as much as 30 degrees F above normal record, shattering temperatures continue constantly in the West as it fries under a climate engineered ionosphere heater induced dome of high pressure.

Some of the blue highlighted zones in the US east may be as much as 30 degrees F below normal, the moisture from Hurricane Harvey was used for the same purpose to keep the same predetermined zones temporarily cooled down while the planet as a whole continues to superheat.

The moisture from hurricane Irma will be used for the same: welcome to our geoengineered world. 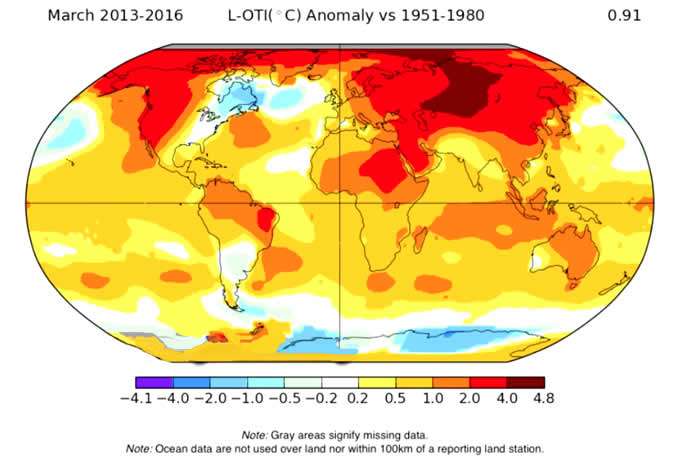 This GISS departure from normal temperatures image documents the record of overall planetary surface warming from 2013 to 2016, the profound warming in the US west and the near absence of overall warming in the eastern US is further confirmation of the completely engineered and ongoing scenario just described in the previous NOAA image of extreme US temperature imbalances.

While the world continues to free fall into abrupt climate shift geoengineering cool downs with highly toxic chemical ice nucleating elements have helped the world’s largest military to keep the most population dense regions in the US from feeling the full impact of what’s unfolding.

This is the psychological aspect of climate engineering, keeping populations confused divided and in many cases pacified in regard to the true state of the unfolding global climate and environmental collapse.

Until the last possible moment the paradox is this, climate engineering is the single greatest climate disrupting and environmentally destructive assault ever launched by the human race.

Considering the degree of anthropogenic damage to the planet on countless fronts that’s saying a lot how dire is the threat we collectively face from the unfolding climate and biosphere collapse, far worse and far more immediate than almost any yet pretend.

Even though record numbers of cyclones have been occurring in other parts of the world with record intensity hitting nations such as the Philippines over and over, nations that are no longer willing to comply with US occupation and controlas already shown US major cyclone impacts have been suppressed for over 12 years.

What has changed and why we must consider and remember this since all available climate data proves the climate engineers possess the processes and resources to suppress and/or redirect hurricanes?

If the weather makers didn’t want hurricane Harvey to happen how it did or where it did?

It would not have happened if the weather makers wanted to completely suppress hurricane Irma to diminish or dissipate it or to stir it out to sea. Available historical data proves this fact.

Why now the change of this strategy for the climate engineers?

The US population has been subjected to weather warfare for decades, it’s now become unimaginably blatant and aggressive in lockstep with the growing power structure desperation.

Everything’s changing on countless fronts and this must be remembered and considered.

We mustn’t think dichotomously with the this or that mindset, the power structure has great and many agendas, everything they do carries complex implications and motives.

This is most true in regard to the climate engineering assault.

Populations are waking up to the power structure cancer and their crimes, disasters like that just caused by hurricane Harvey and what’s likely coming from Irma served many agendas for the global elite.

In the case of Harvey there were our oil prices and production to consider, potentially increased economic activity due to the need to fix the disaster. the creation of mass distraction while the power structure pushes to our World War Three, the potential disabling of populations thus rendering them unable to stand up to government tyranny, the opportunity to move the military into place in preparation for the already unfolding and inevitable societal collapse, but again, there are other climate engineering objectives related to even more dire factors that far too few are paying any attention to.

Our biosphere is imploding, we’re already in a runaway climate shift scenario heading toward a mathematically certain near-term global collapse if we remain in the current course.

The climate engineers will do anything they can and everything they can at any cost to the web of life to hide this fact from populations in their attempt to postpone public panic for as long as possible and thus to keep the Military Industrial  Complex in full control.

It would seem the power structures willing to exterminate life on Earth.

Make your voice heard in the critical battle to sound the alarms.

Use credible and compelling informational materials which can be found on the homepage of  geoengineeringwatch.org

Make your voice heard while it still matters.