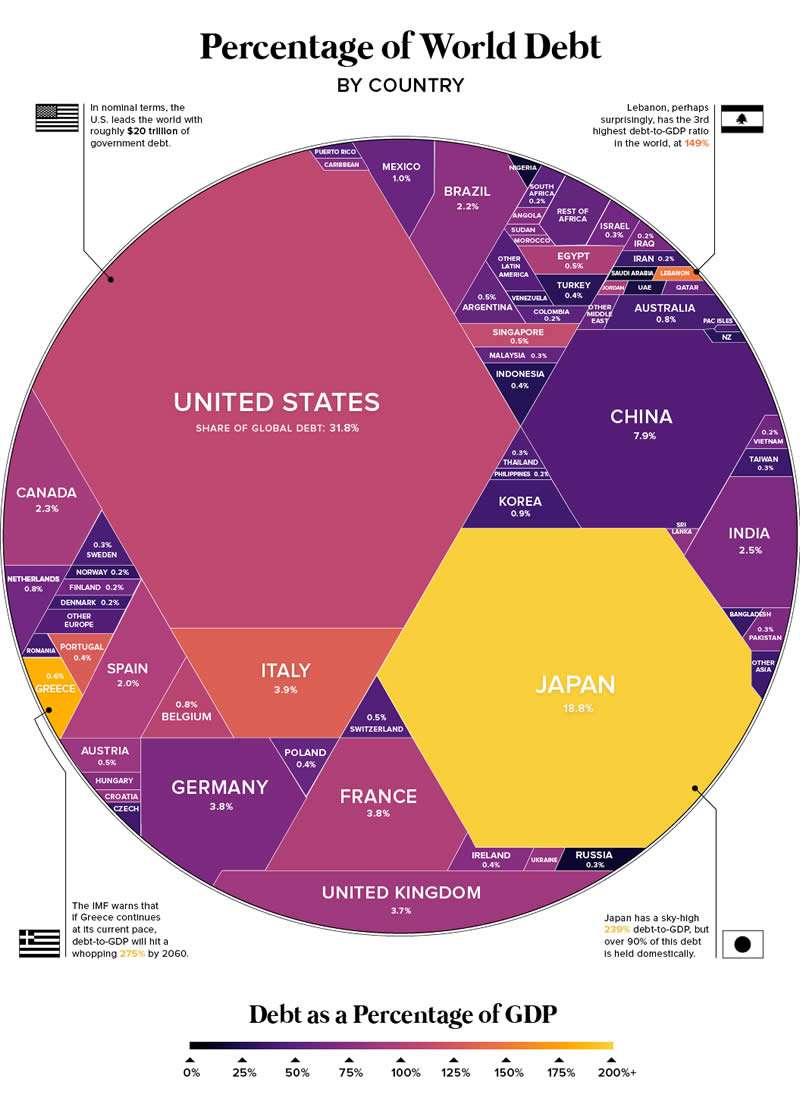 If you add up all the money that national governments have borrowed, it tallies to a hefty $63 trillion of Global Debt.

In an ideal situation, governments are just borrowing this money to cover short-term budget deficits or to finance mission critical projects. However, as Visual Capitalist’s Jeff Desjardins notes, around the globe, countries have taken to the idea of running constant deficits as the normal course of business, and too much accumulation of debt is not healthy for countries or the global economy as a whole.

The U.S. is a prime example of “debt creep” – the country hasn’t posted an annual budget surplus since 2001, when the federal debt was only $6.9 trillion (54% of GDP). Fast forward to today, and the debt has ballooned to roughly $20 trillion (107% of GDP), which is equal to 31.8% of the world’s sovereign debt nominally.

In the header infographic (click to enlarge), we look at two major measures:

Let’s look at the top five “leaders” in each category, starting with share of global debt on a nominal basis.

Together, just these five countries together hold 66% of the Global Debt in nominal terms – good for a total of $41.6 trillion.

Next, here’s the top five for Debt-to-GDP.

While only Italy and Japan here are considered major economies on a global scale, the high debt levels of countries like Greece or Portugal are also important to monitor.

In the IMF’s baseline scenario, Greece’s government debt will reach 275% of its GDP by 2060, when its financing needs will represent 62% of GDP.

Greece, for example, is continuing along a particularly unsustainable path – and external creditors are getting stingier. Most recently, both the IMF and Greece’s euro-area creditors have demanded for the country to implement a law that automatically introduces austerity measures if a budget surplus of 3.5% of GDP isn’t hit.

While Greece has dismissed such demands as “unacceptable”, the country – along with many others around the globe – will have to accept that constant debt accumulation has eventual consequences.

The article does not cite the fundamental thing of all this Quackademic talk about Global Debt. Who are the creditors?

It seems fairly clear that creditors are the Cabal, the Khazarian Mafia of the Central Banks. And who has the world’s central banks in hand, maybe the Rothschilds? Well, you do not need to be a leader to understand that the whole system has been structured to get exactly at this point.

The introduction of immigrants from the Third World to Europe has done nothing but lowering the awareness of the slavery regime by leveling all the nations to the bottom, accustoming people to debt and taking away the hope of the people deviating their attention against the invaders. Well, the result desired by the Archontic System seems to have been fully achieved, the people are at the mercy of the smallness.

However, we know that something is changing, people are awakening, the signals that were previously inaccessible or ignorable now shine, the Cabal has arrived to the terminal and these quackademic speeches will become history very soon, forgotten behind the prison bars orin the Galactic Central Sun that is waiting for the Roths… despite instructing their puppets churning out at a relentless pace bogus data, such as false and insignificant Italian’s ISTAT statistics.