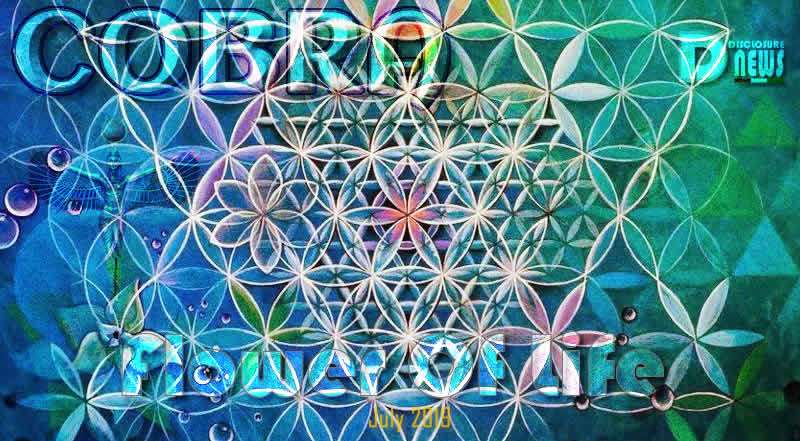 In the last few months since mid-April, planet Earth was fluctuating between the Gamma Timeline (Light Intervention) and Delta Timeline (Planetary Annihilation).

All intel about this was strictly classified as too much focus on negative timeline would increase the probability of its manifestation.

During this time, the Light Forces were clearing one very dangerous layer of plasma anomaly with Toplet Bombs.

This layer has been successfully removed on June 21st around noon GMT and the danger has been greatly reduced. Although some Toplet Bombs still exist, and some plasma/quantum fluctuation primary anomaly still needs to be cleared, the positive gamma timeline is now much more secure.

The June 21st success of the Light Forces has brought much fresh positive luminous plasma into our Solar System and this positive plasma has excited the mesosphere around planet Earth later that day to produce some awesome Noctilucent Clouds. 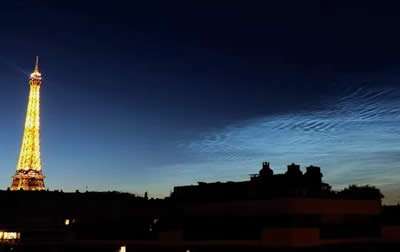 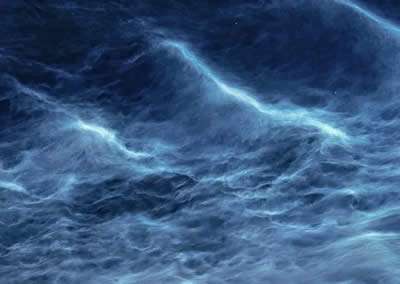 The Light Forces have communicated that for the first time since 1996 Archon Invasion, Ascension archangels are again present in our Solar System. 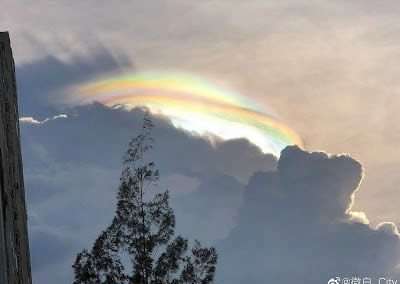 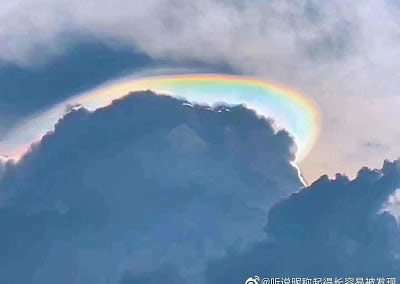 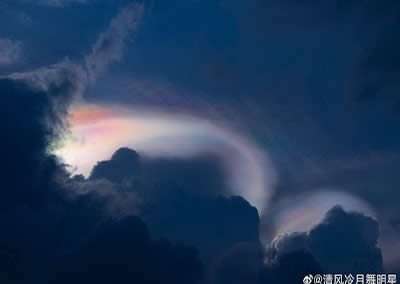 The Light Forces have communicated that the process towards the Event is now accelerated and there is no time to build physical Islands of Light before the Compression Breakthrough.

If you feel guided to continue with Island of Light projects feel free to do so, but main focus now is to anchor as much Light as possible in the situation as it is now, to stabilize the transition.

The Light Forces are now starting to clear the main anomaly which has engulfed planet Earth in 1996.

The main anomaly consists of all potential, not yet manifested combinations / perturbations of primary anomaly quantum wave function in quantum foam.

Occultist Kenneth Grant was aware of the danger of primary anomaly exploding from the plasmatic Tunnels of Set into ordinary reality long before the invasion happened in 1996. He wrote in his book Nightside of Eden, published in 1977 (following image).

Dark anomalous plasma near the surface of planet Earth is arranged by the dark forces based on trapezoidal non-harmonious geometrical shapes and also by distorted Non-Euclidean Geometries (Wikipedia). 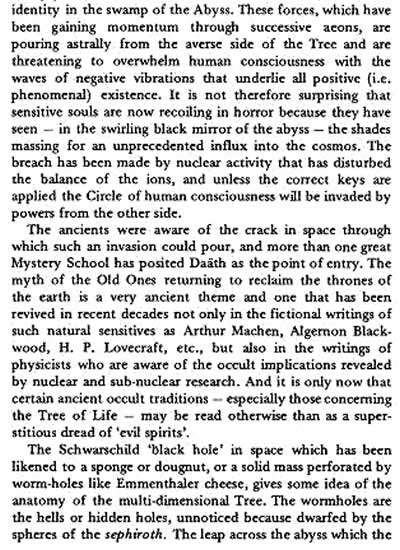 … Identity in the swamp of the Abyss. These forces, which have been gaining momentum through successive aeons, are pouring astrally from the averse side of the Tree and are threatening to overwhelm human consciousness with the waves of negative vibrations that underlie all positive (i.e. phenomenal) existence.

It is not therefore surprising that sensitive souls are now recoiling in horror because they have seen – in the swirling black mirror of the abyss – the shades massing for an unprecedented influx into the cosmos.

The breach has been made by nuclear activity that has disturbed the balance of the ions, and unless the correct keys are applied the Circle of human consciousness will be invaded by power from the other side.

The ancient were aware of the crack in space through which such an invasion could pour, and more than one great Mystery School has posited Daath as the point of entry.

The myth of the Old Ones returning to reclaim the thrones of the earth is a very ancient theme and one that has been revived in recent decades not only in the fictional writings of such natural sensitives as Arthur Machen, Algernon Blackwood, H. P. Loveeraft, etc., bur abo in the writings of physicists who are aware of the occult implications revealed by nuclear and sub-nuclear research.

And it is only now that certain ancient occult traditions – especially those concerning the Tree of Life – may be read otherwise than as a super stitious dread of “evil spirits”.

The Schwmcllild “black hole” in space which has been likened to a sponge or doughnut, or a solid mass perforated by worm-holes like Emmenthaleru cheese, gives some idea of the anatomy of the multi-dimensional Tree.

The wormholes are the hells or bidden holes, unnoticed because dwarfed by the spheres of the Sephiroth. The leap across the abyss which the…

One of the main occultists of the dark forces, Michael Aquino, has developed a ritual named “the ceremony of the nine angles” to enforce trapezoidal non-sacred geometries in negative occult rituals and this ritual is widely used by the dark forces since 1970s.

The lattice of non-sacred geometries is the basis of Matrix construct which surrounds the planet. 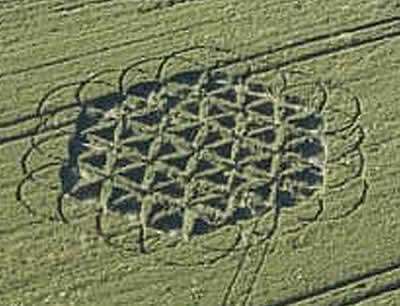 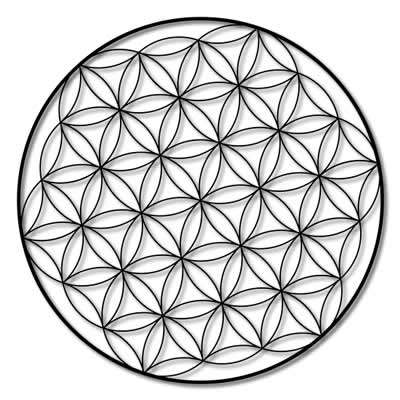 The Light Forces are now asking everybody to use Flower of Life sacred geometry as much as possible.

The Light Forces are strongly supporting this project, as you can see in this crop circle. 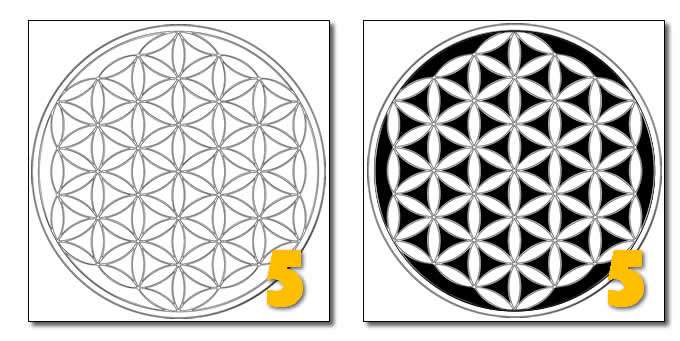 Another crop circle hints at Chimera spiders being taken to the Central Sun. 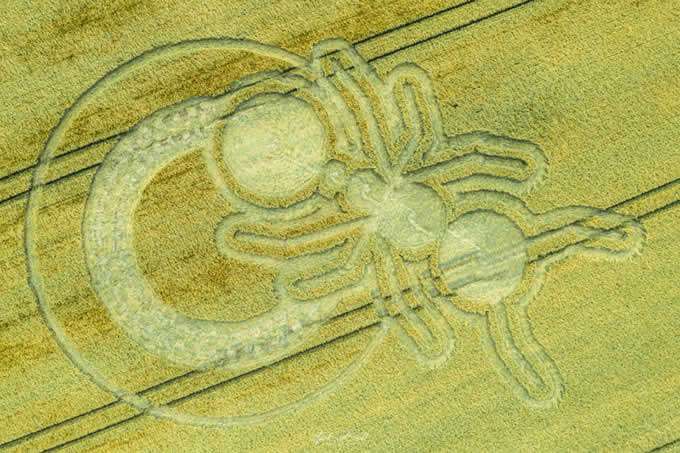 It is interesting to note that this crop circle has appeared exactly on June 21st.

The plasmatic Chimera spiders are being taken from the Tunnels of Set (dark plasma filaments) into the Galactic Central Sun right now.

The third crop circle communicates that the Cintamani Grid around the planet is being activated to the next level. 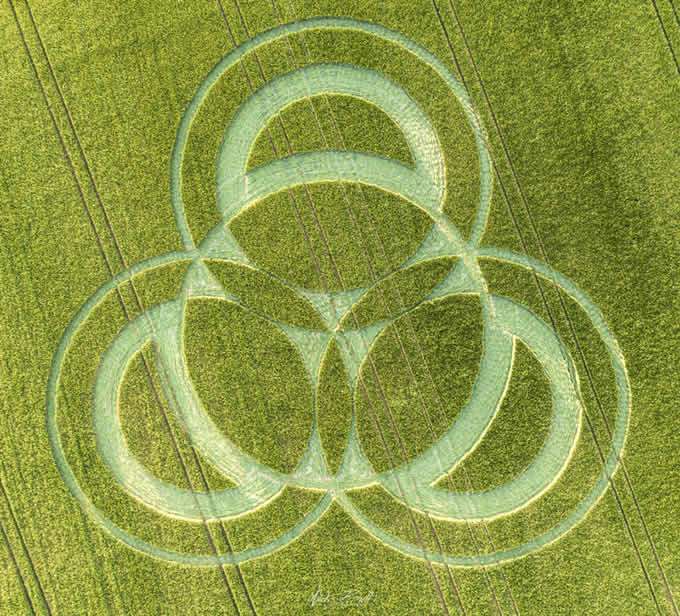