Recent trends in financial markets, notably a stock market bubble of biblical proportions, back up this assertion.

Any financial veteran will tell you that when financial markets fight against reality, reality always wins in the end. This means stock prices could fall by 90% or more.

However, in a sign the financial war is not yet over, European royals disagree, saying, “All of the world’s investment banks have begun to migrate away from the old system, so it is just a matter of time before it seamlessly or frictionlessly just morphs from the old to the new.”

This may work for payment systems, ATMs, and credit cards, etc., but not for the Western system of Babylonian debt slavery as a whole. 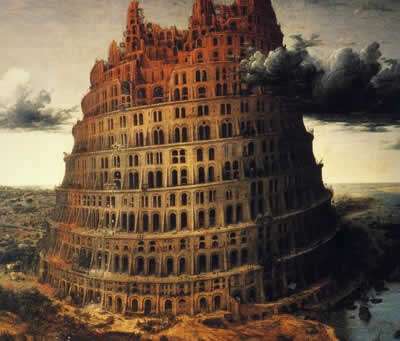 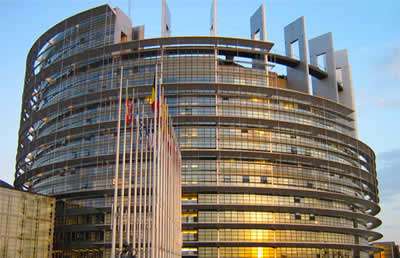 Further proof that this is a system of debt slavery comes from the fact the bottom 90% of the people owe 72.4% of all the debt.

This stock market, controlled and owned by the super-rich and their high-level servants, has become fraudulent and parasitical and is actually sucking money out of the real economy.

This makes a collapse mathematically inevitable.

Let’s take a look at some more numbers that prove this. From January to October of this year worldwide, $339 billion has been put into bonds and $208 billion has been taken out of stocks, and yet the stock market keeps hitting record highs.

That’s because since 2009, institutional investors and households have taken $1.9 trillion out of the stock market while corporations, using private central bank funny money, have bought $3.6 trillion of their own shares.

Plus, according to the Wall Street Journal, 97% of listed companies are not using Generally Accepted Accounting Principles (GAAP) in releasing their profits, meaning basically they are cooking their books.

Coca Cola is a good case study. To quote from The Daily Bell:

To summarize, the families that own the Western (and Japanese) central banks are printing money and handing it to the corporations they also own, while sucking the lifeblood out of 90% of the population.

The financial system has become a giant black hole, which makes perverted sense since many of the ruling families worship the black sun.

One likely trigger will be the collapse of Deutsche Bank, which just announced a third quarter loss of 832 million Euros.

This chart of their stock price bears an uncanny resemblance to Lehman Brothers just before they collapsed. 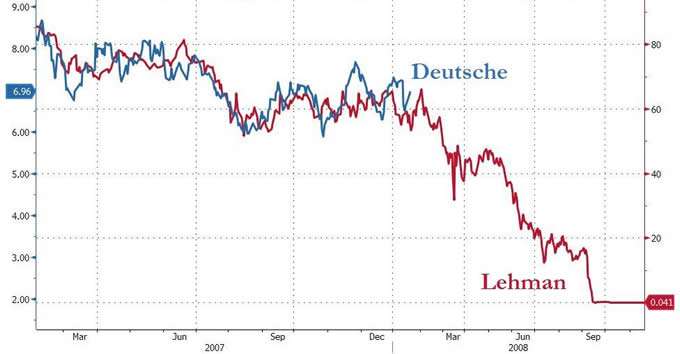 A collapse of Deutsche Bank would pull down the European Central Bank and bankrupt the EU, the Asian sources say.

Needless to say, while it’s easy to spot a bubble, it’s harder to predict when it will burst. However, Asian secret society and White Dragon Society (WDS) sources believe a collapse is likely in 2020.

This will be followed by a jubilee (a one-time write-off of all debt and redistribution of assets) and a huge campaign to fix the planet.

This plan includes setting up a meritocratic future planning agency that anybody can apply to join.

Before that becomes possible, though, some serious battles remain to be fought.

Right now, the main action is taking place in Saudi Arabia and Mexico, where the Khazarian mafia is fighting to preserve its oil and drug money pipelines.

Let’s start with the situation in Mexico, where according to Pentagon sources, U.S. President Donald Trump has “declared war on Mexican drug cartels, and indirectly the Democrats who are their secret supporters.”

However, Mexican sources say recent events in Mexico such as the supposed murder of nine American women and children are just false flags.

The evidence leads to “Yunque, an extreme right-wing occult sect with traces of pedophilia (Father Marcial Maciel was a part of it),” say Mexican patriots.

The Mexican sources have compiled a damned case, stating that the recent attempt to arrest El Chapo’s son and the alleged murder of the Americans were part of a desperate survival effort by the US conquering North Mexico and its oil fields.

The LeBaron family, which was to be the victim of nine women and children, stole water, threw peasants from their land, smuggled drugs and is involved in, among other things, the sex cult of NXIVM, the sources said.

They note that the video of the “massacre” showed no bodies, no clothes and no witnesses and that the bullet-proof survivors allegedly walked six hours and fifteen kilometers through hostile desert terrain, all in Arizona and not in Mexico.

According to the sources, the failed attempt to arrest El Chapo’s son was taken by the US Drug Administration and the Governor of Culiacán without informing the President of Mexico.

“The cartel responded like a well-organized army. The stench of CIA activists is omnipresent,” the sources say.

With the excuse of these attacks, the US Congress will call drug cartels terrorist organizations, opening the door with the Patriot Act to make war in Mexico, they conclude.

A detailed report of the Mexicans can be found in a letter to the editor on this page.

Now let’s turn to the situation in Saudi Arabia, where the Khazarian mafia is struggling to maintain the petrodollar system by bringing the Saudi oil company Aramco to the stock market.

“Iran’s announcement to create a new 53-billion-barrel oil field should derail Aramco’s IPO and make it richer than Saudi Arabia, whose demonstrably depleted reserves could be well under 200 billion barrels,” sources in the Pentagon said.

“Until Saudi Arabia signs a non-aggression pact with Iran and a peace agreement with Yemen, and S-400 [anti-aircraft batteries] are operational to protect its oil wealth, no one will invest in Aramco,” the sources said. 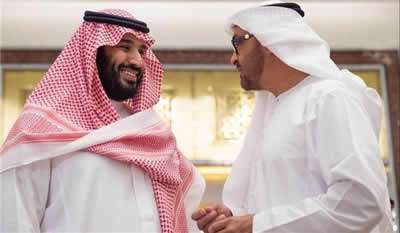 “While China pretends to be interested in helping Aramco to help Mohammed Bin Salman, it may be forced to resign because of Saudi human rights violations, war crimes, genocide, crimes against humanity, torture, mass murder and terrorism” they conclude.

Of course, the battle for Saudi Arabia is also about the Rockefellers and other Cabal families’ attempts to use the oil to bribe the Chinese to join, WDS sources say.

That’s why they handed over $ 100 billion of Saudi money and control over Japan’s election campaign to Softbank’s son Masayoshi, a relative of Sun Yat-sen, the founder of modern China, sources said the Asian secret society.

The sources of the Asian secret society, however, say that they are not fooled by this maneuver, so Son suddenly has no more money.

Instead, the sources say they want to bankrupt the Bank of Japan with the Federal Reserve Board and the European Central Bank.

Sources say they are setting up a bank in Serbia to replace the European Central Bank. Serbia receives Russian S-400 air defense to protect the planned bank. This would be a great historical justice for the destruction of Yugoslavia.

In a note that the US military is aboard this plan, sources in the Pentagon say: “Trump may attend the March Day Victory Day military parade in Russia to send a message to the Deep State, Zionists and China.“

For their part, the Chinese are now preparing to establish a $ 10 trillion space “Moon Economic Zone” by 2050.

There’s a lot more going on beneath the surface that we can not write about for safety reasons.

However, we can say that more and more senior cabal politicians are disappearing.

The Cabal’s desperate activists use tweets, letters, press releases and computer graphics to give the impression that their favorite politicians are still there.

However, we hear that they are held incommunicado while exposed to “fierce questions“. Most sing “like canaries,” according to sources at the Pentagon.

Once the cleanup in the US is completed, attention will be focused on Europe and Japan, WDS sources say.

This could be an indication that the Zionists are negotiating a surrender.