War On China. By Ben Fulford.

DNit Note: After the attack the War, discernment³ if you decide to read it…

The battle to liberate planet Earth is reaching a dangerous stage as the Khazarian Mafia uses Bioweapons to try and start a war between the United States and China.

However, this plan is backfiring because both the Chinese and the white hats in the military-industrial complex know exactly who is behind the bioweapon attacks on China and now Africa.

P3 Freemason sources say Israeli Crime Minister Benyamin Netanyahu is leading the latest attempt to start World War III and kill off 90% of humanity. Pentagon sources, while not naming Netanyahu in particular, also point the finger at the government of Israel.

If the Israelis wish to avoid collective punishment, they need to hand Netanyahu and his mass-murdering accomplices over to the Chinese for interrogation, CIA sources say.

In a sign that total war has now been declared on the Khazarian Mafia, both Pentagon and Asian secret society sources have gone silent.

Multiple attempts to confirm independently what is going on in China for example, were met with “radio silence.”

One regular Pentagon source says, “Other than former Joint Chiefs of Staff chair Joe Dunford, who now sits on the board of Lockheed, there is no intel and this may continue for a while.”

There is also an unprecedented campaign of censorship going on regarding the bioweapon attack on China.

For example, the following paragraph was deleted from a Hong Kong-based news site dimsumdaily.hk:

“The Ministry of Foreign Affairs of China has officially demanded that the United States explain why biohazard containers were found buried in the evacuated consulate general in Wuhan.

The PRC security forces cordoned off other U.S. diplomatic missions in the country.”

Also last week, the Indian scientists who reported they had found HIV viruses artificially inserted into the new coronavirus infecting China were threatened with death by Mossad agents and forced to retract their paper, according to Mossad sources.

Apparently somebody powerful in Israel is desperate to cover up the fact this was a bioweapon attack on China.

Of course, the world is not buying the story that this is a naturally occurring coronavirus.

The Muslims know what is going on, as do the Russians and the Indians. So does everybody else, except a shrinking group of brainwashed sheeple in the West.

No matter what though, the U.S. and China are not going to be fooled into going to war with each other.

This can be seen, for example, in an official Xinhua news report about a call Chinese President Xi Jinping had with U.S. President Donald Trump that was requested by the U.S. side.

Trump said, “The United States fully supports China’s fight against the novel coronavirus epidemic, and is willing to send experts to China and offer assistance in various other forms.”

In fact, Trump informed the Chinese that the U.S. had arrested three individuals in connection with the bioweapon attack on China, including 60-year old Dr. Charles Lieber, Harvard University Chairman of the Department of Chemistry and Chemical Biology.

Robert David Steele, formerly of the U.S. Marines and the CIA, last week sent the following message to the Chinese about Lieber:

Weak signals are emerging that Wuhan was an act of war by Israel against China, using a double-agent, Dr. Charle Lieber, (who is Jewish and therefore especially susceptible to Zionist influence if not control) whose top student from China was embedded at Wuhan University of Technology where he was also a “Strategic Scientist.”

We are also hearing that this could have been an insider trading double-play like 9/11, also done by the Zionists. Who benefited in the City of London, Wall Street, and Hong Kong and Tokyo stock exchanges?

In what may have been a retaliatory attack, HIV expert Dr. Frank Plummer who was “recognized for leadership roles in the Sars, H1N1 flu and Ebola epidemics,” died suddenly on February 4th.

However, there may be an even more sinister aspect to the attack on China that is related to a rogue artificial intelligence. Just before the virus outbreak in Wuhan, the city installed 10,000…

However, there may be an even more sinister aspect to the attack on China that is related to a rogue artificial intelligence.

Just before the virus outbreak in Wuhan, the city installed 10,000 5G base stations.

As we have reported before, 5G technology was experimented with in South Africa for mass mind control.

In other words, the entire situation in Wuhan may be an experiment in mass mind control using the epidemic as a pretext.

Here is what a Mossad source had to report:

“As for the Nipah virus, aka coronavirus, you have all the latest intel. China is finished. This is looking more and more like a culling of up to half of China’s population. It has been done before as confirmed by high ranking Chinese government officials and history.”

A CIA source described the situation this way:

Still much the same today…still a military-style rule of the people. Nothing has changed since Chairman Mao. It just became more modern and let the people think they have freedom.”

One way to see if we are dealing with a situation caused by a rogue AI is to determine the origin of the now-viral picture showing the similarities between the fictitious Umbrella Corporation of the Resident Evil games and movies, and a Shanghai (not Wuhan as we mistakenly reported last week) based “Bao Hu San” (Chinese for umbrella) biotech corporation.

What needs to be determined now is if the Chinese company is real or if this is just digital mind manipulation. If the company is real, the next thing to investigate is who financed it. It’s a good bet the trail will lead to the Mega group of Zionist

Commodity prices, such as copper and oil, are also plummeting as world trade freezes.

However, somehow, stock markets continue to hit new record highs. Something is about to break.

If we take an optimistic viewpoint, maybe the good guys are staging a planned implosion of the Oligarchy’s financial control grid. Time will tell, very soon.

In any case, the Zionist oligarchs are apparently planning to move their production out of China to Indonesia.

Here is what a CIA source based in Southeast Asia said: “I have observed how Bloomberg News has promoted Indonesia in the past 6-9 months. Almost every day there is something interesting about Indonesia and the his government. We have discussed this before. This seems to be the reason to bring Indonesia to the fore. “

“Jokowi wants Indonesia to transform itself from a supplier of raw materials to a factory to take over from China. Timing is perfect. Of course, this is NOT just a huge coincidence. “

My advice to Indonesians is to look at the promise of the big investments promised by the Khazarian oligarchs, the way you would see the gift of a pusher who offers you the free trial of heroin dose.

At first it is beautiful, but as you can see from what is happening in China, it will eventually ruin your life.

With Asian Secret Societies on the warpath, being a Zionist oligarch is now probably one of the most dangerous occupations on earth.

Finally, we will conclude with some strange snippets of raw information that have come to us.

MI6 sources have suggested that the Queen of England chose Princess Anne, her second and only daughter, to take her place as the next “Queen of England”.

Of course, Charles is bruised. After checking with my sources, a British royal said that Princess Anne would only be regent of her imperial majesty George VII.

Another news about the American elections came from a Mossad contact in New York:

South Bend, Indiana Mayor Pete Buttigieg, whom Democrats want as their presidential candidate, (after cheating Bernie Sanders with manipulation of the vote) publicly announced in 2015 that he was gay.

Most of its funding comes from the internal circle of Bibi Netanyahu. It’s the flavor of the month for the Khazarian Mafia at this stage of the 2020 presidential saga in the United States.

Finally, according to FSB sources, even though the Russian government has declared its border with China closed, “In fact, truck drivers come and go from China because no company wants to lose profits.” 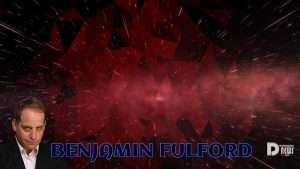