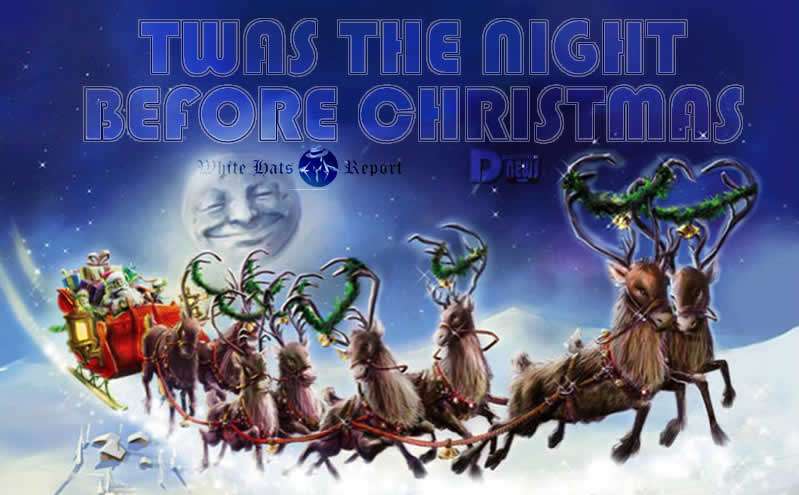 Twas The Night Before Christmas. By White Hats Report.

Twas the night before Christmas and all through the land,
The swamp creatures were worried, cause a line has been drawn in the sand.
The indictments were sealed and sent to the courts,
Plans being made to cut off escape and cancel passports.

The people were all nestled all snug in their beds,
While visions of freedom danced in their heads.
Trump in the White House and Kelly guarding the gate,
History in the making with WAR declared on the deep state.

When out on the lawn at Langley there arose such a clatter,
The media tried to ignore it but Patriots know what’s the matter.
The shadow government being invaded by the Marines,
Bound and determined to restore the Republic by any means.

Documents and computers and hard drives, too,
Evidence and proof of treason collected and the JFK coup.
Time is counting down on these long time traitors,
Draining the swamp of these dangerous gators.

While the media and their lapdogs try to cover it up,
We’re finding out the “Russian collusion” was just a setup.
Not surprising given the Clinton crime family’s treason,
The depth and breadth of the deception is beyond reason.

As Santa checks his naughty and nice list for the holiday season,
The overriding theme of the naughty list is high treason.
At the top of the list, it’s replete with ex-Presidents,
Soon, they will be calling prison their new residence.

Followed closely by the cabal infested DOJ and FBI,
No longer will the country and Trump turn a blind eye.
Their dastardly deeds are being exposed,
The will of the people will soon be imposed.

The witch hunt continues, looking for Russian collusion,
The people know by now, it’s all an illusion.
The only collusion that’s being exposed is by the deep state,
Ironically, the people have woken up and will no longer take the bait.

The cabal controlled media bears much of the blame,
They’ve become so desperate, they’re all without shame.
Continuing to push their insane fake news narrative,
Charging them as conspirators has become imperative.

Further west can be found more names on the list,
Realizing predators and pedophiles are in our midst.
Yes, Hollywood is the target of much attention,
Their undoing is by their own invention.

As Santa closed the book, a tear rolled down his cheek,
He knew this is a time not for the timid or weak.
The US should be the strongest on the block,
But under Bush, Clinton and Soetoro has become a laughingstock. 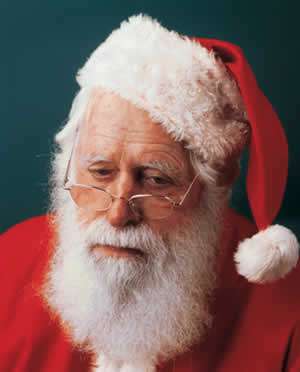 He wiped the tear and looked up to speak,
He knew his words must be strong and not weak.
Now was the time to invoke his reach,
He gathered himself and began his speech.

“We must protect our children throughout the land,
If we fail them that, then we’ve had a hand.
In the despicable destruction of our own nation,
For its time we find our higher vibration.

And gather together in person and online,
To rid this scourge and begin to shine.
The light on the traitors and pedophiles, too,
The responsibility to take back our Republic is all on you.”

He paused for a moment and gave it some thought,
And recalled with a growl what the predators have wrought.
A nation deceived and a world denied,
It’s time to stand tall for those who have died.

“Gather your children and friends all around,
In your states, cities and all over town.
Unite together and always stand strong,
The abuse and destruction has gone on for too long.

Save your children and your souls before it’s too late,
There’s still a chance this world can be great.”

With that he rose and climbed into his sleigh,
He hoped the citizens would soon find a way.

To rid themselves of the pestilence, fraud and pain,
And in so doing they would have much to gain.
He had packages to deliver and good will to spread,
As he prompted the reindeer and up went the sled. 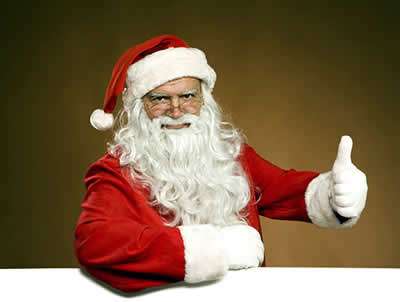 He smiled and gave all a big wave as he rose out of sight,
“A Merry Christmas to ALL and to all a good night.”

We at the White Hats Report and affiliates would like to wish everyone
a Merry Christmas and Happy Holidays!

The storm clouds continue to form even as we head toward the holidays although our crack weather prognosticators have assured us that thunder will boom and lightning will crack starting in January and will continue for a few weeks.

This gives us time to reflect, regroup and enjoy the holidays with family and friends before resuming the offensive.

We will have another release before Christmas and a Call To Action before the first of the year to prepare for what comes in January and beyond.

We are, have been and will continue to work with our partners across the pond at OWON (One World of Nations) to collaborate on creating the perfect storm.