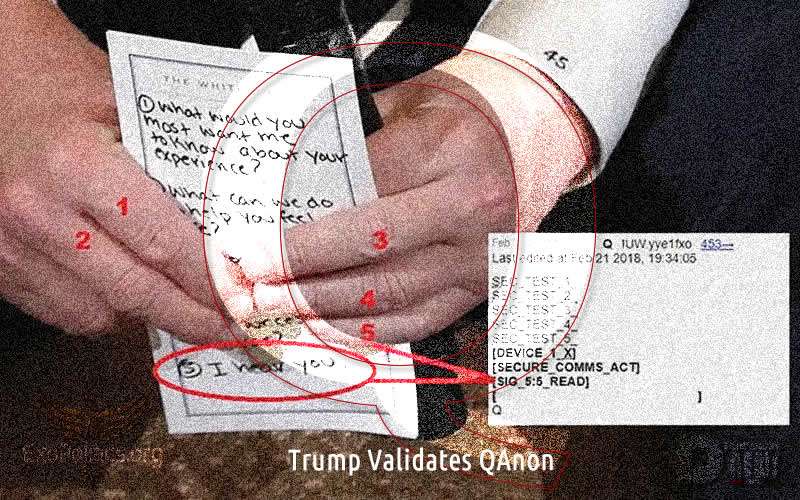 Just before the meeting began at 4:21 pm, President Trump was photographed showing some handheld notes on White House stationary with a list of five talking points he planned to use during the meeting.

Unusually, Trump had the notes facing outward toward the cameras, rather than facing towards him which would be normal for any public speaker.

This made it easy for the notes to be photographed leading to immediate media speculation about the appropriateness of Trump’s talking points.

Only a few hours after the meeting, at 7:34 pm, EST, QAnon released a coded post referring to five security tests.

The next day, QAnon posted an image showing Trump holding the note, alongside the later coded message.

Trump’s hand placement, the five note’s points, appeared to have a connection to QAnon’s coded post. 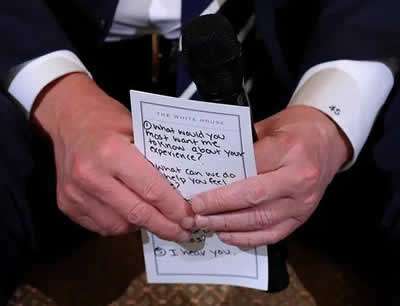 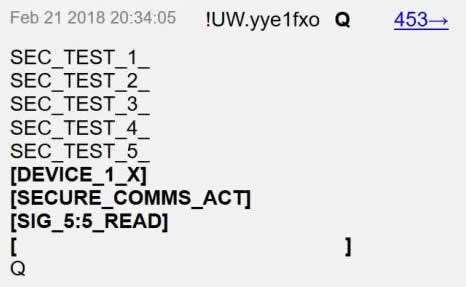 The message QAnon was transmitting was that Trump had deliberately turned his notes outward facing the camera in order to pass on a coded message.

QAnon was telling his audience that Trump was hearing the voices of the many estimated to number as much as twenty million, who have been following the QAnon material – “I hear you”.

During the meeting itself, available on video, the notes are nowhere to be seen. Trump, only held the notes prior to the meeting’s start. This tells us that these were just talking points for Trump to memorize before the meeting began and were then discarded.

It’s possible that he accidentally had the list of five points facing out prior to the start of the meeting, but its highly unusual for an experienced public speaker like Trump to do so.

The more plausible explanation is that his action was deliberate.

Given the connection QAnon found in Trump’s odd hand placement around the notes, and the coded message released only three hours later, this makes it clearer that Trump’s action was deliberate and not accidental.

Consequently, it does appear that Trump was sending a coded message that corroborated the QAnon material, as investigative reporters such as Jerome Corsi contend.

If Trump was indeed passing on a coded message that both corroborated the February 21 security test, and that he was listening to people following the QAnon material, then some important conclusions can be drawn.

First, Donald Trump is aware of and endorsing the QAnon disclosures of classified information occurring on anonymous message boards.

This conclusion supports the contention of Dr. Corsi that QAnon is a group of U.S. Army Military Intelligence officials that are disclosing classified information about real life events involving the White House. 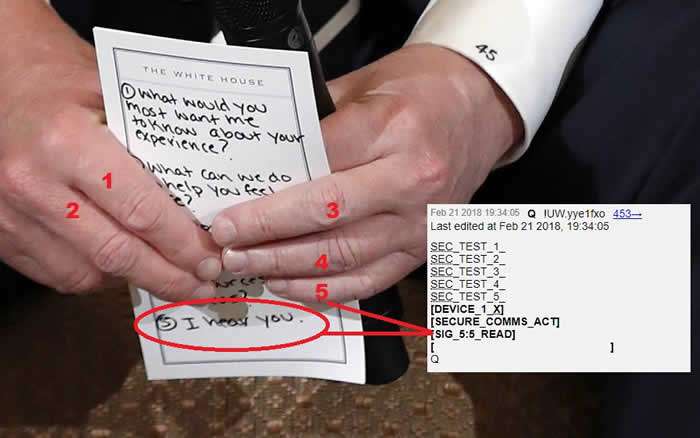 Second, Donald Trump is actively participating in sending coded messages designed to legitimate the QAnon material, which confirms that his administration is directly connected with and supporting QAnon.

This is significant since many insiders possessing classified information would not normally release it, unless authorized by a higher authority, such as Trump. 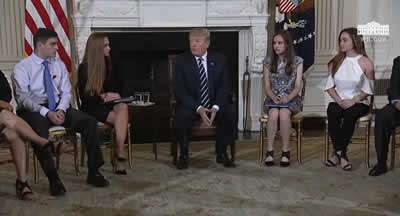 Finally, the Trump Administration is locked into a no holds barred struggle against Deep State actors and forces as explained in over 800 posts to date by QAnon.

In addition, Corsi has claimed that Trump is very familiar with the cover-up of information concerning UFO’s and Secret Space Programs.

It’s therefore very possible that QAnon will be the means by which advanced technologies secretly developed in Unacknowledged Special Access Programs will be disclosed to the world.

This leads us to a comment Trump made in his inauguration speech:

We stand at the birth of a new millennium, ready to unlock the mysteries of space, to free the earth from the miseries of disease, and to harness the energies, industries and technologies of tomorrow.

It’s therefore well worth closely monitoring QAnon’s posts and President Trump’s actions in supporting the release of classified information through anonymous whistleblowers, and what this is about to disclose about UFO’s and secret space programs.