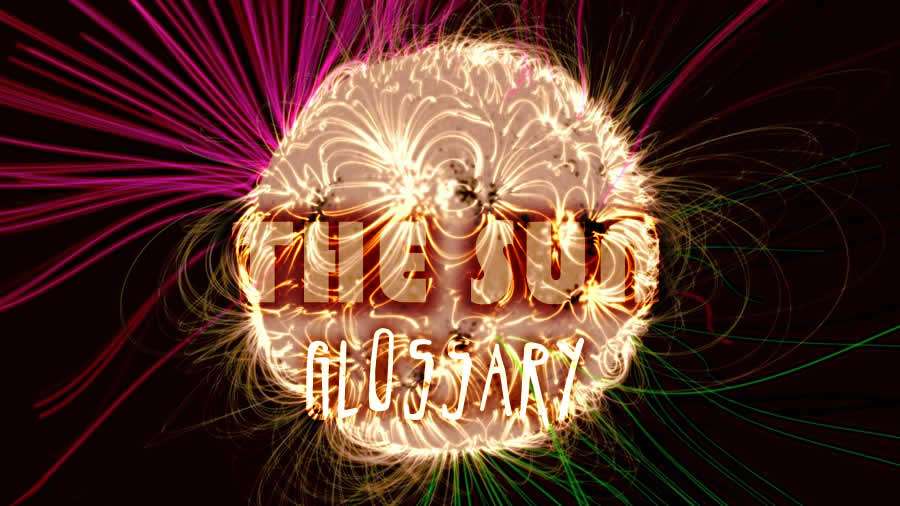 A coronal mass ejection (CME) is an unusually large release of plasma and magnetic field from the solar corona. They often follow solar flares and are normally present during a solar prominence eruption.

The plasma is released into the solar wind, and can be observed in coronagraph imagery.

Coronal mass ejections are often associated with other forms of solar activity, but a broadly accepted theoretical understanding of these relationships has not been established.

CMEs most often originate from active regions on the Sun’s surface, such as groupings of sunspots associated with frequent flares. Near solar maxima, the Sun produces about three CMEs every day, whereas near solar minima, there is about one CME every five days. 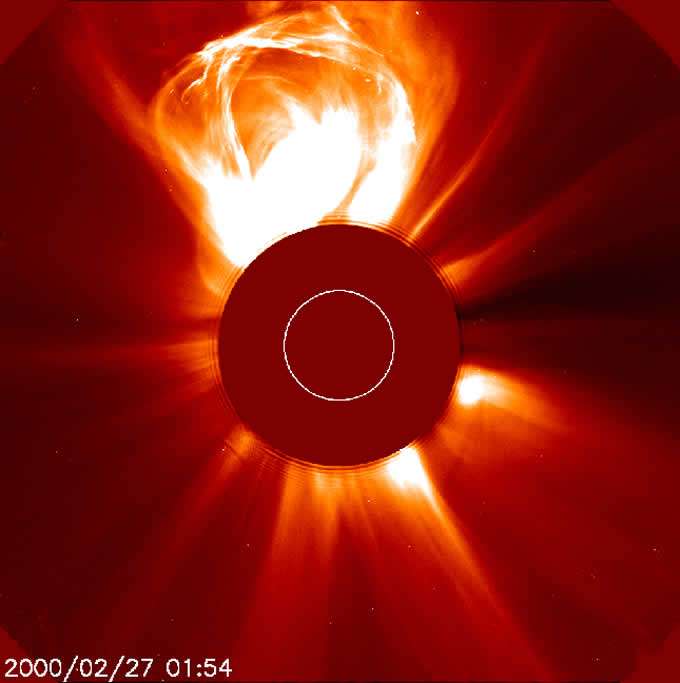 Coronal mass ejections release huge quantities of matter and electromagnetic radiation into space above the Sun’s surface, either near the corona (sometimes called a solar prominence), or farther into the planetary system, or beyond (interplanetary CME).

The ejected material is a plasma consisting primarily of electrons and protons. While solar flares are very fast, CMEs are relatively slow.

Coronal mass ejections are associated with enormous changes and disturbances in the coronal magnetic field. They are usually observed with a white-light coronagraph.

The largest recorded geomagnetic perturbation, resulting presumably from a CME, coincided with the first-observed solar flare on 1 September 1859, and is now referred to as the Carrington Event, or the solar storm of 1859.

The flare and the associated sunspots were visible to the naked eye (both as the flare itself appearing on a projection of the Sun on a screen and as an aggregate brightening of the solar disc), and the flare was independently observed by English astronomers R. C. Carrington and R. Hodgson.

The storm took down parts of the recently created US telegraph network, starting fires and shocking some telegraph operators.

The Sun contains magnetic fields that arch away from areas in the corona that are very thin due to the lower levels of energy and gas,which cause coronal holes to appear when they do not fall back. Thus, solar particles escape at a rate great enough to create a lower density and lower temperature in that area. 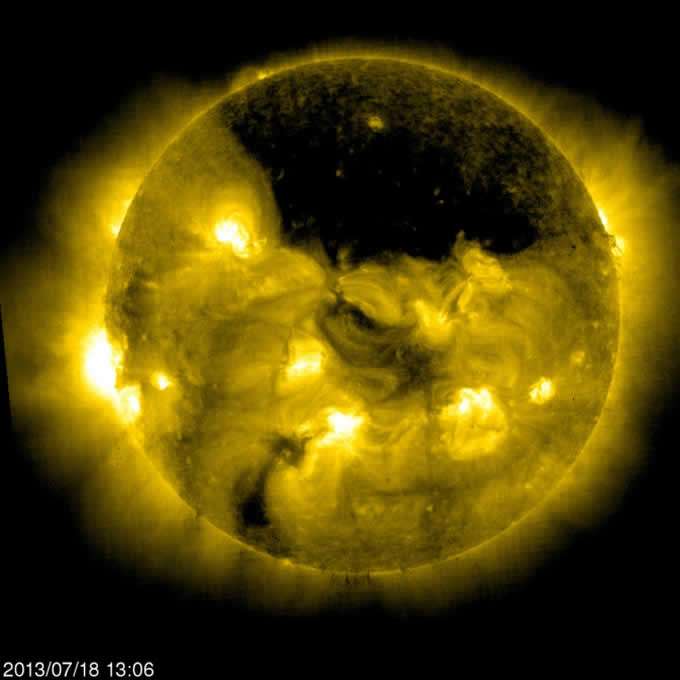 Coronal holes generally discharge solar wind at a speed about twice the average.

The escaping solar wind is known to travel along open magnetic field lines that pass through the coronal hole area.Since coronal holes are regions in the sun’s corona that have much lower densities and temperatures than most of the corona, these regions are very thin.

This thinness contributes to the solar wind since particles within the chromosphere can more easily break through.

A solar flare is a sudden flash of brightness observed near the Sun’s surface. It involves a very broad spectrum of emissions, an energy release of typically 1 × 1020 joules of energy for a well-observed event. A major event can emit up to 1 × 1025 joules (the latter is roughly the equivalent of 1 billion megatons of TNT, or over 400 times more energy than released from the impact of Comet Shoemaker–Levy 9 with Jupiter). Flares are often, but not always, accompanied by a coronal mass ejection.

The flare ejects clouds of electrons, ions, and atoms through the corona of the sun into space. These clouds typically reach Earth a day or two after the event.[3] The term is also used to refer to similar phenomena in other stars, where the term stellar flare applies. 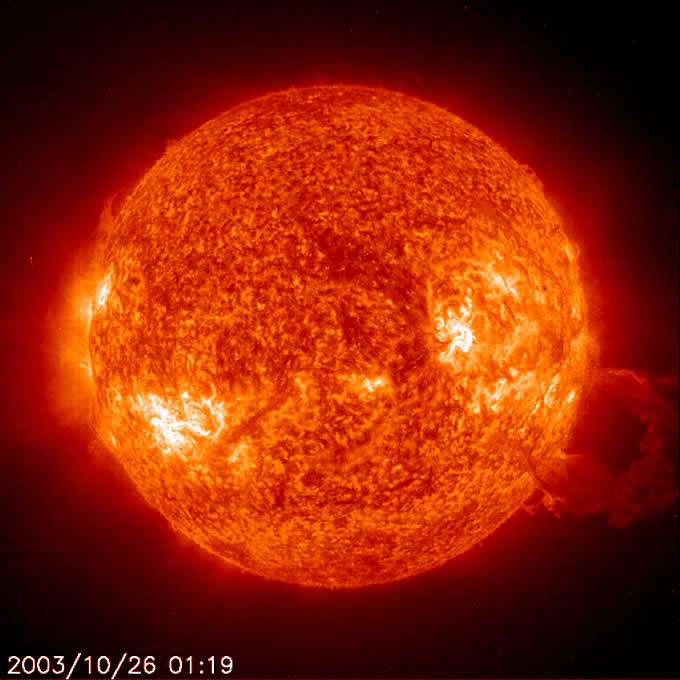 Solar flares are classified as A, B, C, M or X according to the peak flux (in watts per square metre, W/m2) of 100 to 800 picometre X-rays near Earth, as measured on the GOES spacecraft.

Within a class there is a linear scale from 1 to 9.n (apart from X), so an X2 flare is twice as powerful as an X1 flare, and is four times more powerful than an M5 flare.

Flares occur when sped up charged particles, mainly electrons, interact with the plasma medium. Scientific research suggests that the phenomenon of magnetic reconnection leads to this copious acceleration of charged particles.

On the Sun, magnetic reconnection may happen on solar arcades – a series of closely occurring loops of magnetic lines of force. These lines of force quickly reconnect into a low arcade of loops leaving a helix of magnetic field unconnected to the rest of the arcade. The sudden release of energy in this reconnection is the origin of the particle acceleration.

The unconnected magnetic helical field and the material that it contains may violently expand outwards forming a coronal mass ejection.[8] This also explains why solar flares typically erupt from what are known as the active regions on the Sun where magnetic fields are much stronger on average.

Although there is a general agreement on the source of a flare’s energy, the mechanisms involved are still not well known. It is not clear how the magnetic energy is transformed into the particle kinetic energy, nor is it known how some particles can accelerated to the GeV range (1012 electron volt) and beyond.

There are also some inconsistencies regarding the total number of accelerated particles, which sometimes seems to be greater than the total number in the coronal loop. Scientists are unable to forecast flares, even to this day. 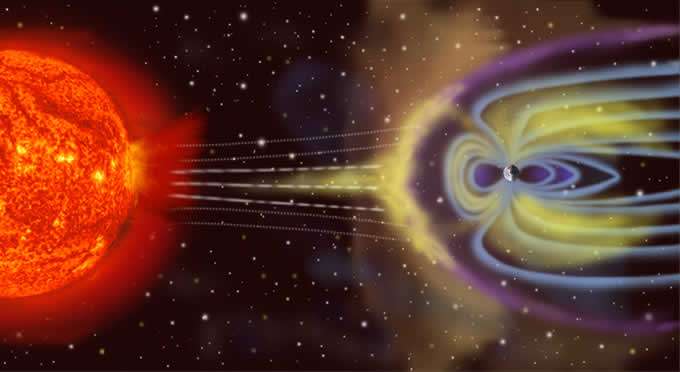 The disturbance in the interplanetary medium that drives the storm may be due to a solar coronal mass ejection (CME) or a high speed stream (co-rotating interaction region or CIR) of the solar wind originating from a region of weak magnetic field on the Sun’s surface.

Several space weather phenomena tend to be associated with or are caused by a geomagnetic storm. These include: solar energetic Particle (SEP) events, geomagnetically induced currents (GIC), ionospheric disturbances that cause radio and radar scintillation, disruption of navigation by magnetic compass and auroral displays at much lower latitudes than normal. In 1989, a geomagnetic storm energized ground induced currents that disrupted electric power distribution throughout most of the province of Quebec and caused aurorae as far south as Texas.

Roughly speaking it is the field of a magnetic dipole currently tilted at an angle of about 10 degrees with respect to Earth’s rotational axis, as if there were a bar magnet placed at that angle at the center of the Earth. 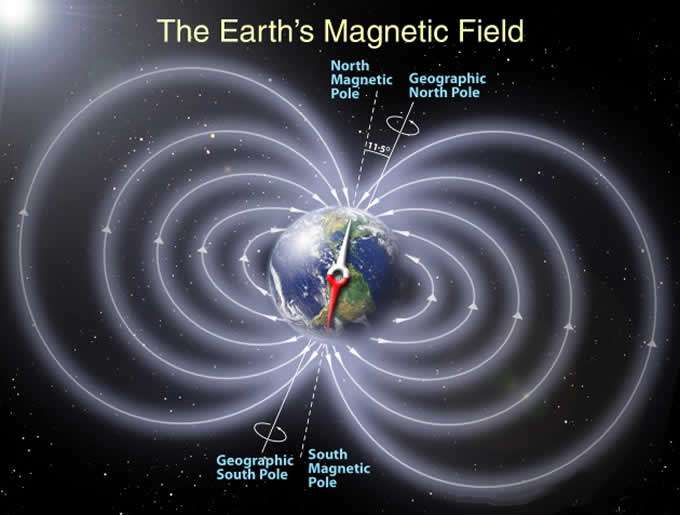 Unlike a bar magnet, Earth’s magnetic field changes over time because it is generated by a geodynamo (in Earth’s case, the motion of molten iron alloys in its outer core).

While the North and South magnetic poles are usually located near the geographic poles, they can wander widely over geological time scales, but sufficiently slowly for ordinary compasses to remain useful for navigation.

These reversals of the geomagnetic poles leave a record in rocks that are of value to paleomagnetists in calculating geomagnetic fields in the past. Such information in turn is helpful in studying the motions of continents and ocean floors in the process of plate tectonics.

The magnetosphere is the region above the ionosphere that is defined by the extent of the Earth’s magnetic field in space.

It extends several tens of thousands of kilometers into space, protecting the Earth from the charged particles of the solar wind and cosmic rays that would otherwise strip away the upper atmosphere, including the ozone layer that protects the Earth from harmful ultraviolet radiation.

The K-index quantifies disturbances in the horizontal component of earth’s magnetic field with an integer in the range 0–9 with 1 being calm and 5 or more indicating a geomagnetic storm.

It is derived from the maximum fluctuations of horizontal components observed on a magnetometer during a three-hour interval. The label K comes from the German word Kennziffer[1] meaning “characteristic digit”. The K-index was introduced by Julius Bartels in 1938. 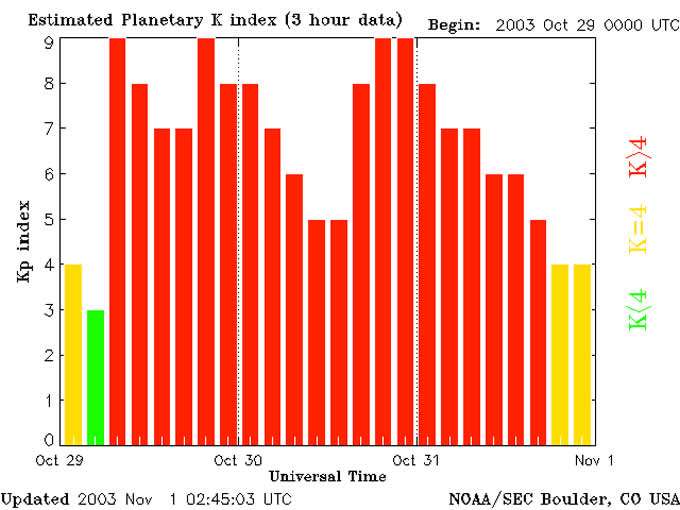 The K-scale is quasi-logarithmic. The conversion table from maximum fluctuation R (in units of nanoteslas, nT) to K-index, varies from observatory to observatory in such a way that the historical rate of occurrence of certain levels of K are about the same at all observatories.

The official planetary Kp-index is derived by calculating a weighted average of K-indices from a network of geomagnetic observatories.

Since these observatories do not report their data in real-time, various operations centers around the globe estimate the index based on data available from their local network of observatories.