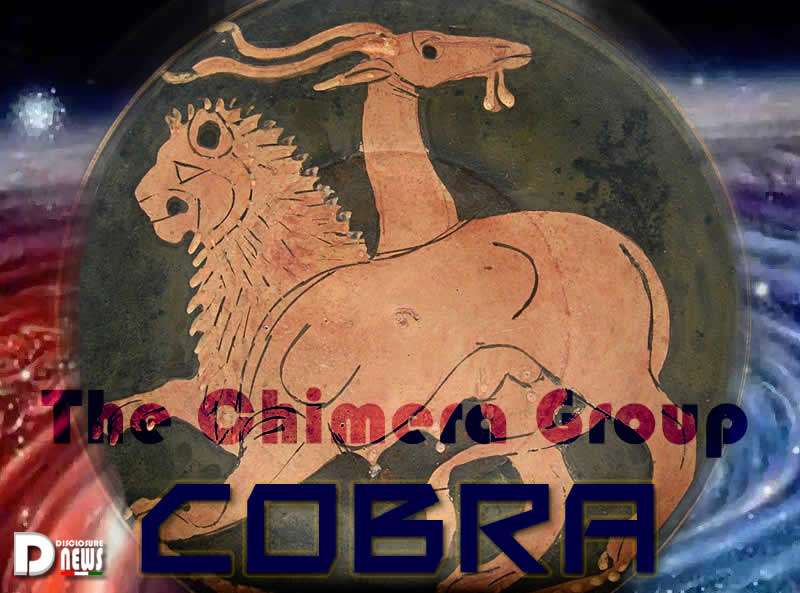 Cobra tells us to raise the awareness of who the bad guys are in this matrix on planet earth.

He claims we focus too much attention on the Cabal or Illuminati when the true underlining of all our “prison planet” problems stems from The Chimera Group.

This is a list of the top 10 secret groups that work under the control of the Chimera Group.

There is a very secret negative group, codenamed Chimera Group, within the Negative Military which has come from Orion and has infiltrated militaries of all major nations during and after the Congo Archon invasion in 1996. This group secretly controls the vast majority of military bases around the world, many of those bases belonging to the US military:

This group includes the leaders of the dark forces from the Andromeda galaxy. They came to Earth in humanoid physical bodies 25,000 years ago and quarantined the planet. They have built a scalar electromagnetic fence around the Earth (the Veil), effectively preventing positive ET contact and thus isolating humanity. Then they constructed a vast network of subterranean cities, using Draconians as slave handlers and Reptilians as slaves and controlled the human population on the surface of the planet from there.

The Chimera Group has enforced secret agreements upon leaders of all national militaries worldwide to suppress and erase all traces of benevolent extraterrestrial contact:

They are in contact with the main Archon and are heavily linked to the Jesuits and the NSA. They successfully infiltrated their agents in groups such as Corteum and the Labyrinth group.

Chimera Group and the Archons

In the past, a certain positive group has engaged long range shooters to remove certain members of the Cabal and they were not successful, because those Cabal members simply returned to the physical plane in a new cloned body which was already prepared for them in a military base under surveillance of the Chimera group.

After 2004 all those clones have been destroyed by the Resistance and now long range shooters of the aforementioned positive group would be much more successful in eliminating individual members of the Cabal and no amount of Blackwater/Academi bodyguards would be able to protect them.

The Chimera Group has put physical strangelet bombs inside most of US military bases and some military bases of other nations and these bombs form the main line of defense against the advance of Galactic Confederation and Resistance Movement forces towards the surface of this planet.

They have also created a planetary network of plasma scalar devices. This network is being operated from the military bases and encompasses the whole planet. Plasma is the fourth aggregate state of matter after solid, liquid and gaseous and is in fact the connecting link between physical and etheric matter.

Plasma scalar devices can thus influence our physical bodies and the Chimera Group uses these devices to attack Lightwarriors and Lightworkers by influencing their body functions, disturbing breathing and heart pulse. They also use plasma scalar lasers to project thoughtforms into minds of Lightworkers, plasma infrasound to lower the frequency of auric membrane of Lightworkers and plasma ultrasound devices as ultimate spying and surveillance machine. The Resistance is already removing these plasma scalar devices with full speed.

There is a silent full scale war ongoing between the Positive Military and the Chimera Group worldwide.

Current hijacking of the MH 370 flight to Diego Garcia was an act of war of the Chimera group, Diego Garcia military base being one of their main strongholds:

Their main strongholds at that time were under Africa, China and Tibet. They had no direct contact with the surface civilization until the early 20th century. That timeframe has seen interesting occult developments.

First, in 1917 the Light forces have formed the Thule society in Germany. Very soon it was infiltrated by the Archon-controlled Rothschild agent named Adolf Schicklgruber (Hitler) and became an instrument of the dark and it further morphed into the Vril society which was developing secret German space program:

When the Chimera Group saw this, they realized that the surface human population has reached sufficient technological development to reach for the stars and pierce the Veil. To suppress that, they have made their first contact with the surface population through Karl Haushofer on his travels to Tibet. After that contact was made, Chimera Group – controlled Haushofer was the main occult force behind the Nazi Germany:

The Chimera Group and the Nazis

After the Nazis have lost WW2, they have been imported into the United States through Operation Paperclip, where they formed the backbone of the military-industrial complex, continued to develop their secret space program and started to build deep underground military bases, financed with Yamashita gold.

The Chimera Group was behind the scenes, carefully watching the moves of the US military-industrial complex and making sure that the quarantine status of the planet was maintained and kept intact. The growing nuclear arsenal of the Negative Military was a great concern for the Galactic Confederation forces and they made an experiment to minimize the yield of the thermonuclear bomb at the Castle Koon nuclear test in 1954:

After the Confederation has successfully decreased the yield of the bomb by almost 90%, the military-industrial complex became afraid and united their forces against the perceived threat from the »tall whites« . This was exactly as Chimera group wanted, because now they had Negative Military united worldwide, working on the common goal of maintaining the quarantine.

Very strict secrecy protocols were established and no leaks about »deep events« which could disrupt the quarantine status were tolerated. This is the reason why you can find no real proof about the existence of ET civilizations anywhere and most »evidence« is fabricated by CIA to further confuse the issue. This is also the reason why you can not find any deep intel on internet but just endless recycling of well-known facts instead. You might already have noticed that almost all intel about UFOs and deep underground military bases is decades old.

You can find the only mention of the Chimera group in a James Casbolt’s interview. He is one of the very few people with access to deep intel who went public. Although not everything in here is correct, it is worth reading:

The Black Sun and the Black Stone

The Chimera group worships the Black Sun, which is their symbol for the Galactic Central Sun. Their leader is still in a possession of a single piece of the Black Stone, which is a lump of heavy top/antitop quark condensate. It was brought to Earth from Rigel in 1996. The Black Stone is the center of the primary cosmic anomaly of darkness and is far more dangerous than the strangelet bomb, as top quarks are much heavier than strange quarks:

Leaders of the Chimera group are the guardians of the electromagnetic null zone.

Now only the underground train system of the Resistance is fully operational. The Chimera group is mostly contained in the uppermost underground sections of the surface military bases, closer than 100 feet (30 meters) to the surface. Their main current strongholds, through which they control the surface of the planet, are:

Each of those locations has their own strangelet bomb on its territory. Those strangelet bombs are quite dangerous and they are the main reason why the Positive Military is not yet making their move for the Event:

A location near Montauk entry/exit point is Cold Spring Harbor, a genetics laboratory where the Chimera produces top Cabal members clones, according to some unconfirmed sources:

Galactic Confederation forces are constantly monitoring the facility and will terminate the cloning program when the situation will be ready for that:

The Chimera Group and the Financial System

The Chimera Group has hijacked the global financial system from the hands of the central bankers in the last decade through the PROMIS software and through high speed trading programs.

The Resistance and the Organization (its forerunner) were aware of those programs for quite some time and were able to siphon off about 70 trillion dollars away from the black funds of the Cabal. That money will be given back to humanity after the Reset through the collateral accounts.

The demarcation line between the Chimera group and the breakaway civilization is called the phase boundary, of which nothing more can be said publicly, and the Event / the Compression Breakthrough can also be called the phase transition.

The Light forces have developed a protocol for the defeat of the Chimera group and the protocol is being carried out.

When this war is over and the Chimera defeated, we will have perfect conditions for the Event.

Clearing of the Chimera group continues, the Chimera have been removed from the European location.

Long Island remains to be their main stronghold, as they need a particle accelerator (RHIC) nearby to maintain their exotic quark weapons machinery.

Playing with strange and top quarks could be extremely dangerous, and this news is leaking into the mainstream media:

The Light forces will never allow something like that to happen.

The Chimera group has tied the scalar plasma detectors to the strangelet bombs and to the top quark condensate which would go off if significant UFO activity would be detected anywhere near the surface of the planet.

The growth of the strangelet could theoretically continue until the whole planet would be absorbed into it, but practically the Light forces can stop the reaction long before that.

The scalar UFO detection grid covers the whole surface of the planet and is being powered from Long Island:

This is the real reason why the positive extraterrestrials do not intervene directly and they will not do so until that danger is completely removed.

The Chimera Group also controls the MoonDust project, which assembled a special operations team which removes all extraterrestrial evidence from anywhere across the planet:

They also remove all genuine UFO photos from public domain and circulate many fake ones through CIA channels into the alternative media.

Thus quarantine Earth is maintained until the Chimera will be wiped out from the planet.

Until then, we will have to be content with fragments of disclosure:

We are not alone in the Universe

Also, the Positive Military can not make a move until those dangers are removed. People are too much focused on the Cabal and tend to forget that the real obstacle is within the military-industrial complex, within the breakaway civilization and finally within the Chimera and I would suggest that those factions are exposed more in the alternative media. That would increase awareness and ease the process towards the Event. David Wilcock did a partially accurate summary of the breakaway civilization, written for the mainstream population: