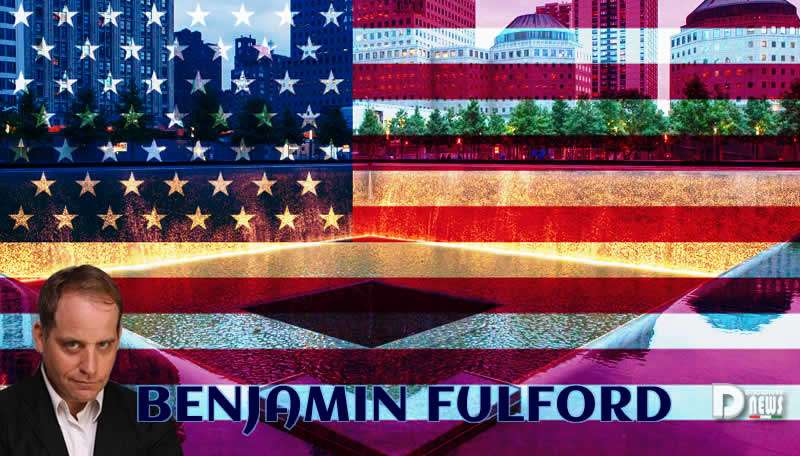 The visit by U.S. President Donald Trump to the UK last week has healed rifts in the Anglo alliance and will make sure the post-9/11 fascist coup in the West will be reversed, according to Pentagon and British royal family sources.

“The visit to Great Britain was very much about the entente cordiale in the Anglo-America axis and all of the ongoing issues of which you are already aware. Brexit is a very big deal. I would say that the trip was a success and the bonds between both countries are now stronger,” was how a British royal summed it up. 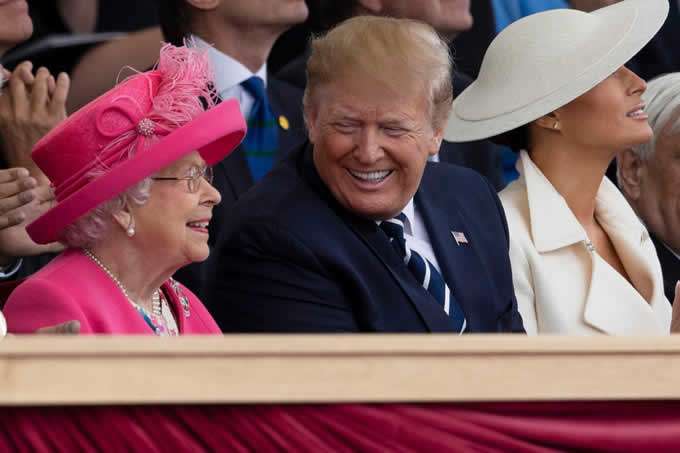 Trump and the Queen

This means there is a split between the Anglo-Americans and the European fascist Nazi aristocrats behind the Bilderberg Group.

A semi-official report from a Bilderberg participant confirms that there is a major split between the German-led EU faction and the Anglos, as well as the Italians.

Sources in French Intelligence, meanwhile, say they have found proof the recent EU Parliamentary elections were rigged by the German faction.

The battle to liberate France continues, the sources say.

Dutch whistleblowers, meanwhile, have been putting out damning information on the Bilderberg founding by the Nazi Dutch royal family and their connection to the fascist American Rockefeller (Clinton), Bush, etc. faction. 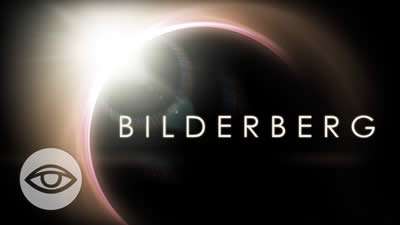 Among other things, they report that Boeing manufactured bombers and sent them to Germany to bomb Americans during World War II.

This is important, because we now have a 30-year Boeing veteran, Patrick Shanahan, as “Acting Defense Secretary” in the United States, even as all genuine military veterans left the Trump administration at the beginning of this year.

Pentagon sources are telling us “the domino-like, sudden collapse of 26 telephone poles right along the main thoroughfare servicing Boeing’s many Seattle facilities along East Marginal Way” last week was “no coincidence.”

“This was a white-hat message to Boeing to cease and desist from the use of remote control override technology in its planes used in its ‘airplane accidents,’ as well as its other warmongering/war crimes/war technologies (that may use 5G), both public and secret,” the sources say.

There are also now more signs that a major financial event, likely bigger than the Lehman shock, is being prepared to finish off the Federal Reserve Board and the EU-central-bank-owning Nazi faction of the Khazarian Mafia.

This means that the fiat “trading platforms,” created by Bilderberger Henry Kissinger for the Rockefeller family after the U.S. abandoned the gold standard in 1971, have been shut down and replaced with a basket of currencies trading within a band relative to the price of gold.

This can be confirmed by looking at a chart of currency movements since 2012, when the Federal Reserve’s 100-year mandate expired. This, combined with massive pumping of money into the stock markets, has led to relative financial stability.

However, as Russian President Vladimir Putin noted last week after meeting with Chinese President Xi Jinping, “The policy of quantitative easing and the other measures that were taken [after Lehman] did not solve the problems in essence, but only pushed them into the future.”

That future may have arrived. Market participants are betting on a huge, seismic shock to the financial system.

The graph below shows how global trade has now collapsed in a manner identical to what happened at the time of the Lehman shock. By the way, we encountered a systematic attempt to censor this graph from the English-language Internet and had to go to a Chinese site to relocate it.

By the way, we encountered a systematic attempt to censor this graph from the English-language Internet and had to go to a Chinese site to relocate it. 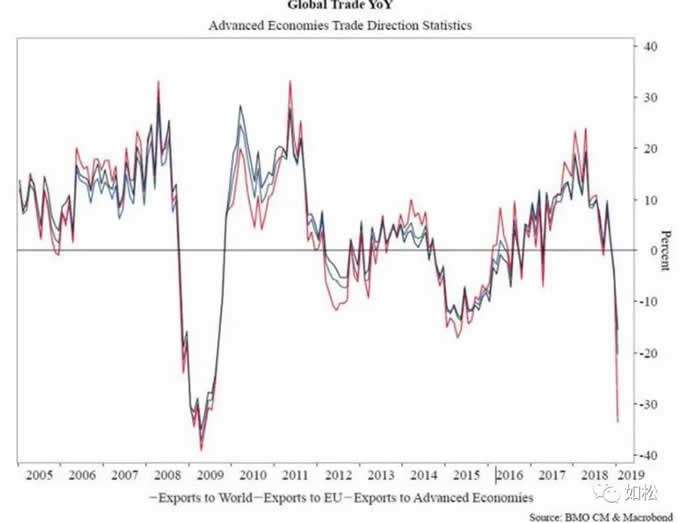 The other graph that indicates something huge is coming is one showing how long-term interest rates in the eurodollar markets are even further below short-term rates than they were immediately before Lehman.

This happens because traders feel something huge is about to happen and try to lock in long-term, stable money before it is too late.

The G20 finance ministers meeting this past weekend in Japan did not help ease market fears when they issued a statement that read in part, “risks remain tilted to the downside” and that “trade and geopolitical tensions have intensified.”

As the usually bland and vague G20 official communiqués go, this is pretty radical stuff.

We asked our British royal family, Pentagon, CIA, and other sources about what this shock might be, but we have run into a very thorough news embargo. The British royal hinted that nothing would happen before September, though.

The fact that most U.S. tariffs on China and sanctions against Huawei and other Chinese firms do not go into effect until September also hints that some sort of world-changing deal is going to be negotiated between now and then.

There are some signs of what the deal might involve.

Pentagon sources meanwhile say they are ready to cut the waste out of the military-industrial complex and pay for rebuilding the U.S. economy with some high tech they have been keeping secret.

The other big issue that is going to be worked out over the coming months concerns the high-tech giants like Facebook, Google, Amazon, and Apple. Here, the G20 have already agreed they are going to force them to pay taxes.

Reversal Of Fascist Trend – To Be Continued…

However, the real issue that needs to be addressed is the censorship and fake information that is proliferating thanks to these high-tech oligopolies.

We noticed, for example, that all photographs we could find on the Internet of King Salman have been replaced with photographs of his new and young body double.

I remember clearly, as do my colleagues, that this article, talking about how King Salman is so senile he cannot remember what happened a minute ago, had a picture of a very aged and decrepit-looking king.

That picture has been replaced. 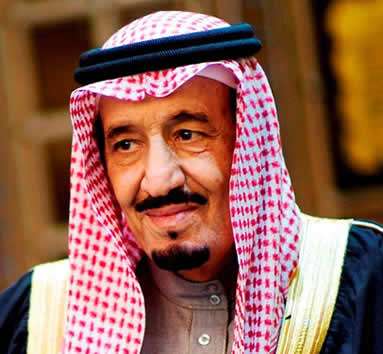 Newspapers and traditional media which actually have reporters in the real world reporting on real events are also saying these high-tech oligopolies are putting them out of business.

Even though subscription revenues are rising, high-tech theft has cut their ad revenue down to $16 billion in 2017 from around $50 billion in 2006.

For years, this newsletter too has suffered from Google pirating, Facebook censorship, etc.

Now, these oligopolies have started shutting down thousands of independent news channels in the name of “combating hate speech,” when it can often be shown this is pure censorship.

For example, this morning when we clicked on a link from Jimstonefreelance.com to an article in The New York Post about the murder of Hillary Clinton’s brother, we got a message saying the link had been censored. Now it just says, “cannot find it.”

This intensified censorship by the Internet giants is coinciding with a new murder campaign.

Also, New York Deputy Police Chief Steven Silks and veteran detective Joe Calabrese were killed last week because they had possession of copies of the video of Hillary Clinton and Huma Abedin torturing and murdering a young girl, the sources say.

This writer has also recently received death threats to himself and his family by Khazarian Nazis angry at our exposure of their crimes. However, they are not going to be able to murder their way out of justice this time.

There are too many of us to kill, and we have truth and justice as well as the military and special forces on our side.

The fact that Clinton had to order the death of her own brother shows just how close investigators now are.

The wheels of justice grind slowly, but they grind to dust. We will conclude our report this week with an update from Indonesia.

The banks and pawn shops have reopened now after being shut for 9 days, much to the relief of everybody, sources there say. However, a White Dragon Society source there says: “Something is definitely brewing here with the disputed presidential election results.“

My contact on the inside told me that the constitutional court (MK) is scheduled to give its opinion around the 22nd of June.

This is not over yet.

There are a few surprises yet to be played. It seems that 17 million ‘ghost’ votes have been confirmed by independent analysis in Central and East Java. All in favor of Jokowi.

“The MK has this information along with the proof, and the judges know it is authentic.

This can flip the results, and Prabowo turns out to be the winner.

I am informed by Indonesian Intel that the Constitutional Court (MK) will declare that a new vote will be held for Central and East Java.

They cannot ignore the hard facts. Change is in the wind.”

This is part of the proxy war between the U.S. and China that will hopefully be settled by September.