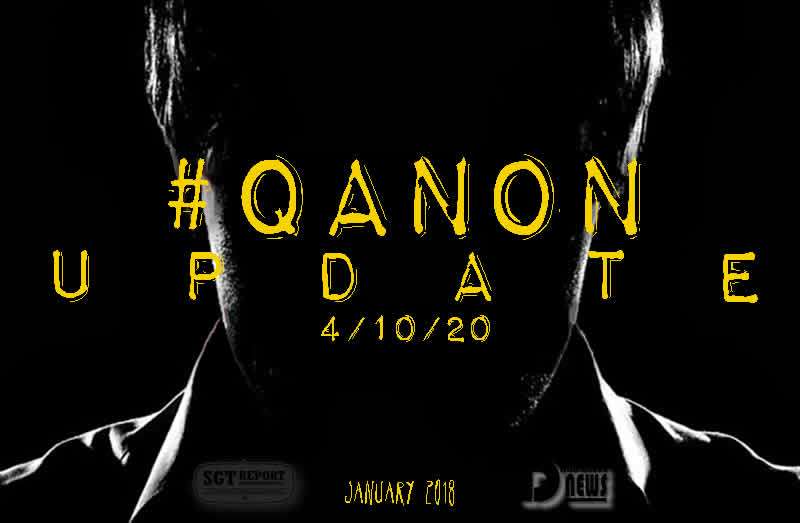 The last information coming from QAnon are pointing out potentially some very bad news for traders and pedophiles, not the least of which is an unprecedented number of flights to Guantanamo Bay.

It is worth mentioning Arizona National Guard military police deployed to Guantanamo.

This Arizona National Guard unit has just been moved from Phoenix, they moved about four dozen soldiers, part of the 850 unit of the National Guard. which are Military Police Battalion. 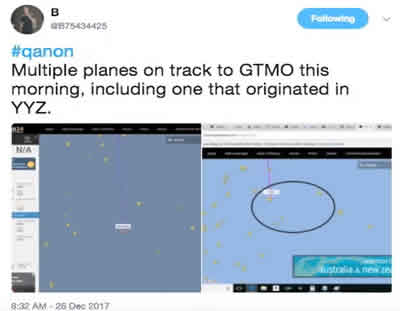 They have just been moved Gitmo and that’s after you had Secretary of Defense Mattis visit Gitmo you’ve had Attorney General Sessions visit, clearly something is going on.

Although it’s not unusual for members of the National Guard to be deployed to Guantanamo this portion of the story is noteworthy.

According to Fox 10 the mission is so sensitive “we were asked not to show the faces of these soldiers and their families” and Colonel Baldwin says “we don’t want to telegraph to the world who’s there and who’s performing this mission because they all have families that are still back here while they’re overseas doing this mission.”

Now you may recall Trump’s November 2016 pledge to fill Guantanamo “with some very bad dudes”.

If reports by Q Anon are to be believed, some of the new guests at Guantanamo may include treacherous politicians and pedophiles and at the top of the list next to the Podesta brothers and Hillary Clinton ought to be Debbie Wasserman Schultz who QAnon and Jerome Corsi have explicitly stated ordered the hit on DNC whistleblower and WikiLeaks email provider, Seth Rich. 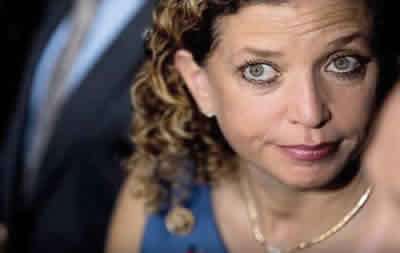 “Broward County Florida is the epicenter of this, Broward County home of traitor Debbie Wasserman Schultz who used the Ewan brothers to blackmail Congress.

“Q Anon just directly says Debbie Wasserman Schultz put out a 187, which is a kill job, on Seth Rich.” 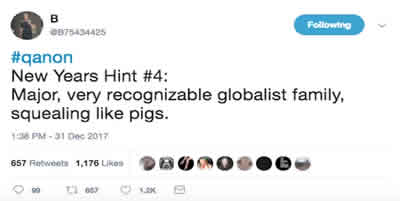 Other anons have concluded that this reference to a globalist family squealing is the Rothschilds and Rothschild puppets in the domestic United States.

That must surely be on notice because president Trump’s December 21st executive order blocking the property of persons involved in serious human rights abuse or corruption.

This certainly gives the secretary of the Treasury, Secretary of State and Attorney General much authority to freeze their assets and do something about their crimes.

Other Q clues also offer hope that 2018 will be the year justice is served on traders and pedos alike.

New Year’s hint number two Julian Assange is safe, he is not where he appears to be, he is a key player in justice and clue number one, at least thirty congressmen will not be returning after the holiday break. 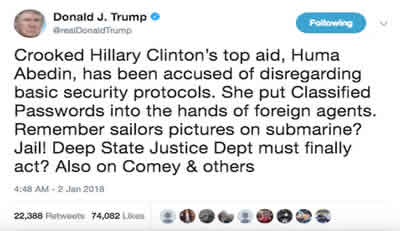 Also over the past days the US Custom System crashed leaving thousands of people stranded at airports across the country making it very hard for anyone, including Deep State traders, to flee the country.

Which is ironic because you’ll recall back on October 29th Q posted this to the deep State traders: “can you rely on being able to board a plane and fly away?”

Of course there was the LAX to Japan flight too. 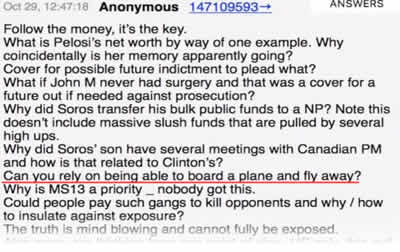 This is the flight that turned around and headed back after making it almost halfway to its destination and it said that passengers aboard that flight including Christy Teegan had to sign non-disclosure agreements.

And recall the Atlanta Airport power outage that lasted some 11 hours, reportedly a high-value target was successfully intercepted.

More recently, in January 1st, a power outage hit the New Orleans International Airport and again the unprecedented flights into and out of Guantanamo Bay leaves one to wonder if Hillary was prophetic when she reportedly predicted in a panic, that if Trump won the election she and her cronies would hang.

Lastly, journalist Jerome Corsi, again, who says the american people are about to be red-pilled and for the ones who still don’t know that pedo gate and pizza gate are real, they are in for a very rude awakening in the very near future. 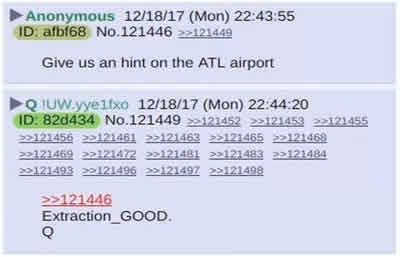 InfoWars: “I mean what is the reaction of the general population gonna be that never believed any of this stuff, you know, it’s so evil they can’t even wrap their minds around it. What are they gonna think when all of this gets exposed and it runs so deep, it runs so big, and you have to recognize at that point that, Wow, every other president knew this was going on and did nothing.”

Jerome Corsi: “Well the the evil of this, I mean the satanic nature of the pedophilia that’s going on in the combination of the Satanism with the pedophilia, is gonna be shocking to the average American, but what you’re gonna see, I think, and you’ll find it exposed first, and WikiLeaks did a great job putting out the pizza gate. In the next six months I expect that a lot of what Alex Jones has been saying is gonna get validated in detailed criminal investigations.

I see no other reason why president Trump would have issued and signed this executive order on human rights abuses.

Clearly the Clintons ought to be worried because almost everyone in the Treasury annex, that along with that order, that was mentioned, was an international criminal involved with the Clintons, or the Clinton Global Initiative or the foundation.”

“I think there’s a lot more than just the Clintons should be worried.”

I’ve been saying 2018 is the year of the arrests of traitors and pedophiles alike so people like John and Tony Podesta and Debbie Wasserman Schultz and even Barack Obama should be on notice.