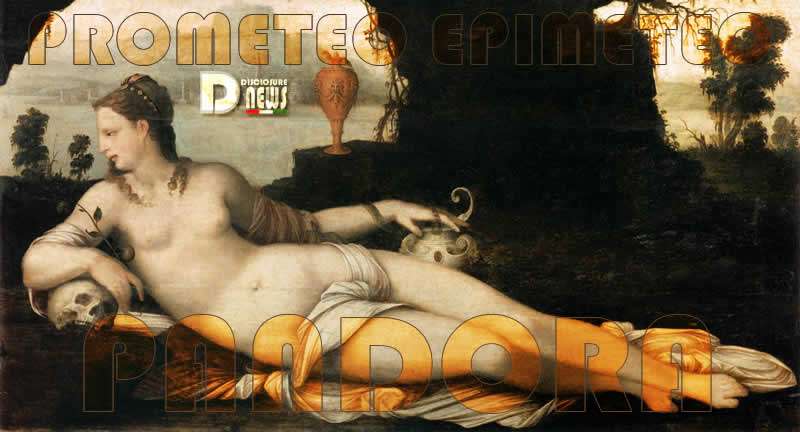 Prometheus Epimetheus and Pandora. By Interstellar.

We take the cue from the Cobra reports, Operation Pandora (Cobra State of Mission Report January 2018) in progress, to talk about Pandora and Greek Mythology. Often these mythological stories give some indication, especially in terms of rewriting history, as they might carry some truth.

Many other egregious works Hephaestus performed, which, for their marvelous beauty, brought joy to gods and mortals.

Only a work, which he performed by order of Jupiter without knowing what effects he would have had, was the source of infinite evils for men.

There were two titans, sons of the Titan Iapetus, who were called Prometheus and Epimetheus.

The first was provided with a high intellect, with much sagacity and acute prescience; the other, on the other hand, was simple, good-nature and gullible, and possessed none of the qualities of his brother.

Prometheus loved mankind and commiserated it a lot, because them, not knowing the fire yet, was living a wretched and petty life, very similar to that of the beasts.

Then the titan went to the workshop of Hephaestus, and while he was busy on his work with the Cyclops near the anvil, stole a spark from the forge and, hiding it in a cane, brought it to the men and taught them to light the fire and use it. 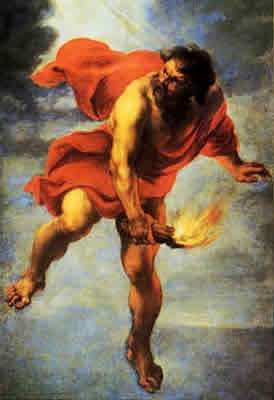 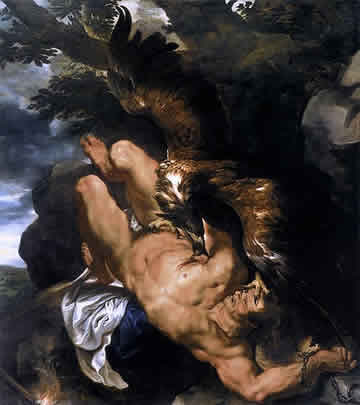 This improved very much the conditions of life of the human race and, having fired the intelligence of men with fire, they began to transform them and progressively, they became uncivilized.

When Jupiter realized that men possessed fire and therefore participated in the goods of the gods, he become fiercely angry and inflicted a tremendous punishment to Prometheus: he chained him on a cliff of Mount Caucasus, in Scythia, and sent an eagle to eat his liver every day, which grew back in the night.

This torture, in Jupiter’s intention, was to last forever; but after thirty years he freed him, to to thank for a reported service rendered by the titan.

In fact, he knew that if Jupiter had joined in marriage with the marine goddess Tethys, whom he had fallen in love with, a child would be born from their union destined to be stronger than his father.

He then offered to the king of the gods to reveal to him this danger that threatened him on condition that he’ll be freed from punishment, and Jupiter adhered.

So the torment of Prometheus ceased, and Jupiter renounced at the wedding with Tethys, who was given as a wife to Peleus, king of Thessaly, illustrious hero, but mortal, to prevent her from wedding with an immortal and give birth to a god too powerful, which could threaten his throne.

Meanwhile Zeus, that was still frowning against Prometheus and badly tolerated that the men had received from the titan, through the fire, the possibility to participate in the immortal gods’ assets, thought to counterbalance the gift given by the son of Iapetus with another gift that would have caused infinite evils to men.

He called Hephaestus to himself and told him:
“Son, you must do me a job that gives satisfaction to the king of the gods and of the men from the offense caused to his prestige by Prometheus: you must take a mass of mud and with it you have to model a woman figure, beautiful and animated as if it were of flesh, and bring it to me. I will take care of the rest.”

He took a mass of very fine clay, kneaded it, molded it and made it a perfect figure of a woman; then he said to her: Move and talk.

And the woman moved and spoke; and she became a living person, of flesh.

The God led her to Jupiter; and these, upon seeing her, were taken by profound amazement.

He then summoned all the gods, and ordered each one of them to give the woman born from the mud a gift to increase her beauty and her attractions; but in his heart he meditated that his gift would cause men sufferings and pains.

The gods obeyed. Aphrodite gave her a wonderful truss radiating all the seductions; the Charis gave her the grace of movements and deeds; Peitho, the goddess of persuasion, suffused in her eyes and throughout her face a warm expression of inviting languor and ingenuous candor; the Horae encircled her with jewels and flowers; Athena gave her a marvelous peplos and passed their mastery to her fingers in the use of the spindle, the spool and the needle; Apollo and the Muses taught her singing and dancing; Lastly Hermes transfused faculties and forethought into her breast, but together with mischief, lies and fraud.

The name of Pandora was given to the woman so adorned with all the gifts of the gods.

Jupiter gave her an unbreakable vase, with a well-fixed lid, containing – he said – many beautiful things, and sent her, led by Hermes, to Epimetheus, Prometheus’ brother, like a gracious present of the king of the gods.

Prometheus had advised his brother not to accept any gifts from Zeus, because he, prescient, knew that any gift from the Chronid would have concealed a deception and would have been fatal for men; but Epimetheus, who was not provided with prudent sense, or prudence, forgot his brother’s warning and let himself be taken by the charm emanating from the whole person of Pandora, and welcomed her, flattered by the preference shown to him by Zeus.

As soon as Pandora settled in the Epimetheus house, she wanted to see what other gifts contained the vase given to her by Jupiter and she easily removed the lid. 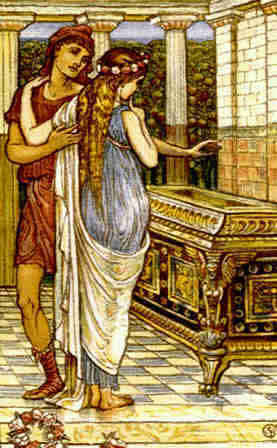 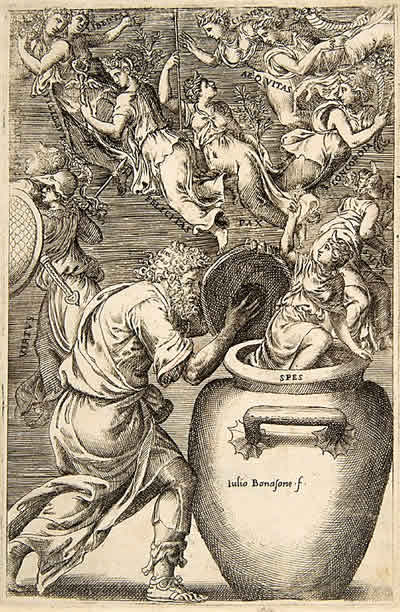 This was the hidden will of Jupiter and so he had foreseen that it would happen.

From the uncovered vase all the ills of humanity immediately emerged into the crowd, the evils that men had never suffered before, the evils of the body and those of the mind and the soul: diseases, sores, hunger, vices that weaken the fibers and hasten old age and death, bad faith, dishonesty, avarice and the love of luxury, betrayal, envy, madness, and countless other evils, among them the least defects partners who are not very sensible, who bring unfortunate couples to ruin.

At the bottom of the vase there was the hope, the one that still remains to the miserable mortal even when he suffered the tribulations and pains of all the evils of the world; and the hope remained locked in the vase when Pandora, by order of Jupiter, put the lid back on it.

Since then, humanity has been tormented by a thousand sorrows, and even Prometheus, no matter how much love he had for them, was able to free it; this was the immutable will of Zeus.