DNI Note: Once again we throw down this “thing” advising to use Highest Discernment, these “sources”, the WDS and who knows what my well be part of another who knows what… Bad become good in a week to bad again the week later, sources usually give intel in a ratio of 3/10 at the best… As we always say we do not agree to many of the things written here, always fear mongering for a global war… it is mostly an exercise  🙂

The summit meeting this week between U.S. President Donald Trump and North Korean strongman Kim Jong-un was preceded by a tidal wave of high-level public and secret diplomacy, because this is no ordinary meeting, multiple sources agree.

The summit will not only discuss peace in the Korean Peninsula, but also the future of the financial system and thus the future of the world, according to North Korean, Pentagon, Illuminati, and other sources. 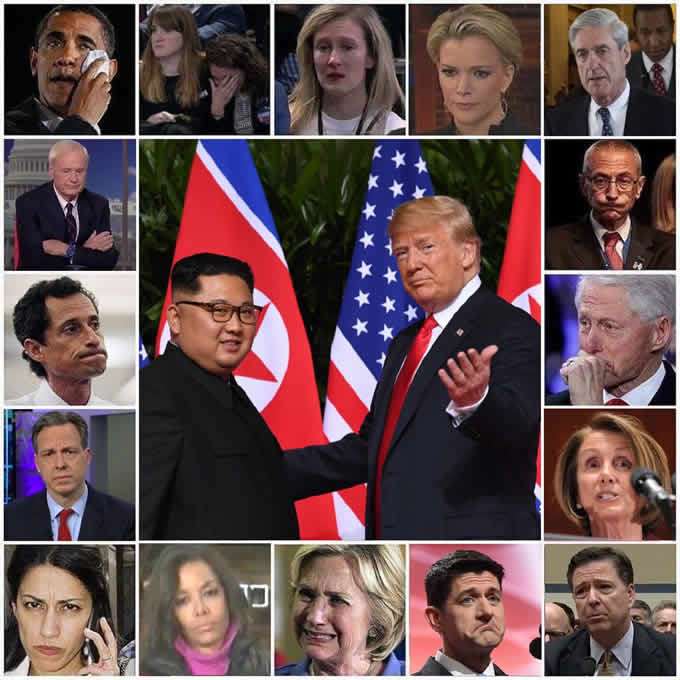 The public meetings this past weekend were the G7 (now G6 following the U.S. de facto withdrawal) summit meeting of Western leaders and a summit meeting of the Shanghai Cooperation Organization (a.k.a. the Eurasian Alliance).

The secret meetings were the Bilderberg meeting in Italy, and meetings between Asian royals and representatives of the White Dragon Society (WDS) held in Japan, according to Asian secret society sources.

The Bilderberg meeting was presided over by high-level financial fraudster Henry Kissinger and included, apparently for the first time, a representative of the Vatican, Cardinal Pietro Parolin.

The top of the agenda was “populism in Europe” which means peasants with pitchforks rising against this satanic elite in the UK, in Italy, in Hungary and pretty much everywhere else in Europe.

As things are going, it will not be long before these child-killing mass murderers are dragged out of their houses and hung from the nearest lamppost, as famously predicted by George Bush Sr.

They also note that the “Department of Justice Inspector General report comes out on June 14 as the number of sealed indictments exceeds 35,000 and the DOJ has added 300 prosecutors.”

Furthermore, “the Senate’s August recess was cancelled so Trump’s federal judges and other nominees can be confirmed,” they note.

A message was sent to the Bilderberg-founding Dutch royal family on June 7th, the day the meeting started when the sister of Queen Maxima, Ines Zorreguieta, was “found hanged in Argentina in a message to pedo royals,” Pentagon sources say.

This happened as 160 children were liberated from an Atlanta child trafficking operation, they noted.

The youngest sister of Queen Máxima of the Netherlands has been found dead in her apartment in Bueno Aires.

Inés Zorreguieta, 33, who worked as a researcher at the United Nations in Panama and was also a talented guitarist, was reported by Argentinian and Dutch media to have killed herself.

The King of the Netherlands, Willem-Alexander, and Queen Máxima are flying to Argentina for the funeral.

Zorreguieta enjoyed a close relationship with her sister and was bridesmaid at her wedding to the then Dutch Crown Prince Willem-Alexander in 2002. She was godmother to the royal couple’s youngest daughter, Princess Ariane, 11.

The Queen, originally from Argentina, was said by the royal household to be “very shocked and very sad”. Máxima, 47, has two brothers, Martin and Juan, and three half sisters, Maria, Dolores and Ángeles.

Also, in England riots broke out over the imprisonment of Tommy Robinson on charges of reporting about a mass pedophile trial.

However, it was Sweden where the real action could be seen. Here the government “mobilized its home guard and reserves to purge Muslim rapefugees,” Pentagon sources say.

Top U.S. General Joseph Dunford flew to Finland last week to meet his Russian and Finnish counterparts “to help the Swedes in their Trump moment,” the sources say.

Austria also kicked out a group of Salafist pseudo-Muslim radical preachers last week, prompting Turkish President Recep Erdogan to warn this would lead the world to “a war between the cross and the crescent.”

Of course, the Rothschild public servants gathering at the G6 meeting in Canada last week did not mention any of this in their communiqué and instead rambled on about things like “gender” (something Mother Nature already figured out at the dawn of time).

The G6 also made it clear they want to keep their control of the world financial system via the fraudulent “CO2 causes global warming” scam by stating that “Canada, France, Germany, Italy, Japan, the United Kingdom, and the European Union reaffirm their strong commitment to implement the Paris Agreement.”

Pope Francis also made it clear last week who his real boss was (hint: not God) by supporting this unscientific fraud whose real aim is to perpetuate financial control by Khazarian (Rothschild, etc.) bloodlines.

Trump made his true feelings about the G6 and the EU known in a meeting with Rothschild slave President Emmanual Macron: Macron told him “Let’s work together, we both have a China problem,” and Trump responded, “the EU is worse than China.”

This leads to the inside story of the summit meeting between Trump and Kim in Singapore this week, where the real topic of discussion will be deposing the Khazarian controllers of the G6 financial system, several sources concur.

The part of the Kim/Trump summit that involves the financial system concerns the rights to ownership of Manchu (Qing) dynasty gold, according to Manchu heir Zang Seungshick (張勝植) and one other Manchu royal who prefers to remain anonymous.

Both sources, who were unaware they were simultaneously contacting the WDS, provided documentation to show Manchu gold was put under the control of the Rothschild family in Switzerland in 1947.

They claim the gold was misappropriated by the Rothschilds and used to finance the Marshall Plan after World War 2.

The gold also financed the founding of the CIA and the country of Israel, they claim. It still funds the G6, they say, but it did not fund the development of East Asia as promised.

The gold is hidden in the mountains behind Basel, Switzerland and the 70-year period after which it is supposed to be returned ends in July of this year, Zang claims.

The sources say that then Chinese President Chiang Kai-shek, Japanese Emperor Hirohito, and South Korean President Syngman Rhee were all involved in this scheme.

The current Rothschild manager of these misappropriated funds in Japan is Finance Minister Taro Aso, he says.

Trump was given this information by Kim when they met in secret at the Panjunmon peace village on the North and South Korean border last November, Zang claims.

Pentagon sources have previously told this writer that Kim and Trump did meet in secret then.

Zang says he was jailed in South Korea shortly after meeting this writer in 2015. He says he was released only because President Park Geun-hye, a “Rothschild agent,” was imprisoned this April.

Also, Zang now claims that Kim Young-hee (金英姫), who came with Zang to meet this writer in 2015,

is the daughter of Kim Jong-un’s executed uncle Jang Song-thaek and is thus a first cousin of Kim’s. Jang was executed because he was working for the Rothschilds, Zang claims.

We were unable to contact Kim Young-hee (the character for Hee 姫 means princess) to confirm this, but we hope she will contact us upon reading this article.

U.S. National Security Adviser John Bolton and U.S. Vice President Michael Pence are also “Rothschild agents” who are trying to block the rights of the Manchus (North Koreans) to their gold, Zang claims.

Certainly Bolton has been trying hard to derail the summit, as can be seen by his public actions such as claiming in public North Korea would be treated like Libya.

These claims by the Manchus are interesting in that it was the G7 countries who benefited from the Marshall Plan and it is they who, with the exception of the Trump regime, have been trying to derail the Kim/Trump summit.

It is also interesting to note that these countries, together with Pope Francis, as mentioned above, support the Paris Agreement as a way of keeping the financial system under bloodline control.

Trump, we note, left the G7 meeting before the discussions on the Paris Agreement began.

Judging from the expressions, the photograph at this link may well be showing Rothschild servants freaking out after Donald Trump showed them documents asserting the North Korean (Manchu) rights to the gold that ultimately backs the G7 (now G6) and Israeli financial systems. 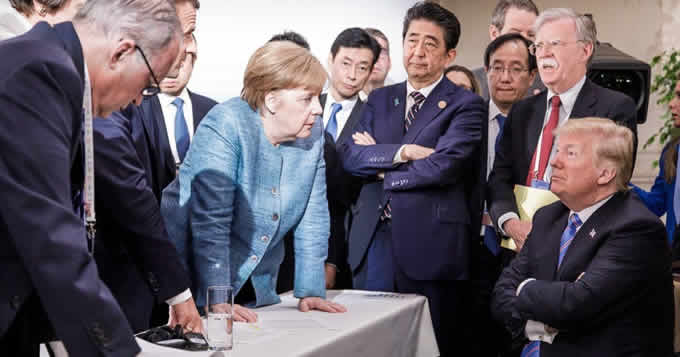 The other Manchu royal, who shuns publicity, is going to present bonds to the U.S. Embassy in Tokyo, Japan and demand that the Federal Reserve Board honor its commitments by monetizing the bonds, he says.

The WDS will back his claims, as will Asian secret societies, the Illuminati, and other powerful groups, secret society sources say.

The aim will be to liberate humanity by ending the Khazarian mafia’s stranglehold on the financial system, the sources agree.

“This will be the fall of Babylon, as thieves should not be in charge of banks,” was how the Manchu (Qing) royal put it.

Already, U.S. Jews, though still thoroughly brainwashed, are starting to wake up and now disagree with Israeli Jews on many key issues.

Also, the Iraqi Jews seem to have figured out that Israel is a satanic con job and have started to return to their real homeland in Mesopotamia, the true setting of much of what is in the Old Testament.

Of course, finishing the liberation of the United States will be the key to making sure all of this happens.

On this front, “anti-Christian liberal Jewish hag Ruth Bader Ginsburg (the notorious RBG) and crypto-Jew [satanist] Sonia Sotomayor… have been targeted by Trump for removal from the Supreme Court,” Pentagon sources note.

The Khazarian mob, of course, is not going to give out with a fight and have been actively “suiciding” whistleblowers recently.

On that front the Pentagon sources note that handbag designer Kate Spade (sister in law of actor/comedian David Spade) and celebrity chef Anthony Bourdain were “suicided” by hanging because they were about to expose “pedo rings.”

On a final note, in something unrelated to the rest of this article but interesting nonetheless, we were contacted by an NSA whistleblower last week who told us the game Pokemon Go was developed by the NSA to turn game players into camera-wielding spies.

The idea is to put rare monsters in places “where suspicious people hang out,” or where for other reasons they need photographs.

This explains the rash of Pokemon Go players entering restricted areas around the world and taking photos.