Antarctica Is Under Lockdown As Secret Space Program Unveiling Begins

An unusual flurry of events and press announcements makes it clear the U.S. government is unveiling its secret space program, multiple sources agree.

The recent trade agreement between the U.S. and China is also linked to these secret space programs, Chinese and Pentagon sources agree.

These are all signs that some sort of mind-boggling planetary event may be coming.

Typically this writer does not tread lightly into the UFO world and believes extra-ordinary claims require extraordinary proof. However, such proof is now undeniable.

The biggest evidence is a series of public announcements by multiple government officials, including U.S. President Donald Trump.

The official launching of a U.S. Space Force by Trump is just the start of a gradual process of disclosure, Pentagon officials say. 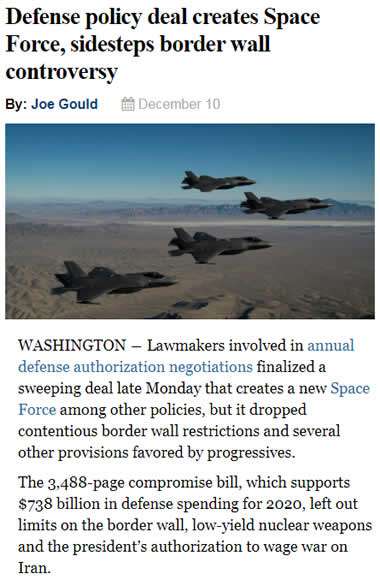 The media is now being filled with stories about UFOs and secret U.S. military technology as part of this process.

As we have previously reported, the U.S. Navy has released patents for anti-gravity flying saucers and compact nuclear fusion.

Now we have a recently retired Air Force general talking about already existing technology that can take us “from one part of the planet to any other part within an hour.”

Rep. Mike Rogers, R-Ala. and Air Force Secretary Barbara Barrett both called publicly this month for the declassification of “a large amount of information about America’s military space programs.”

The $21 trillion missing from the U.S. government budget since 1998, as documented by Catherine Austin Fitts and others, was spent on the secret space program, Pentagon officials confirm.

Much of this technology is now being released to the general public, they say.

We are also getting far more UFO sightings around the world that are being recording on high-quality video.

If you get into the habit of looking at the sky as I have, it won’t be long before you can see for yourself with your own naked eyes.

Now that the Antarctic summer has begun, we are again getting multiple reports of strange goings-on there, too.

On December 10th, a Chilean military plane carrying 38 people vanished in good weather on its way to Antarctica.

A senior CIA officer, and relative of Admiral Richard Byrd of Antarctic exploration fame, told us:

“The Chilean military were ordered by their controllers not to go near Antarctica. They thought they were smarter and knew more than their masters. The C-130 has been removed. It wasn’t who was on the plane, it was what they were carrying that resulted in ‘the disappearance.’ 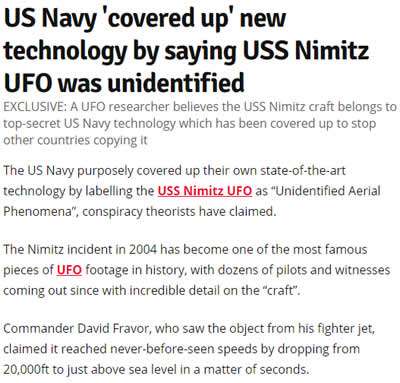 At this stage, there are no entries and exits taking place on Antarctica. The Southernmost continent is on lockdown until further notice (not due to this incident).”

A member of the “Cobra Resistance” who has recently returned from Antarctica provided us with the photograph below. 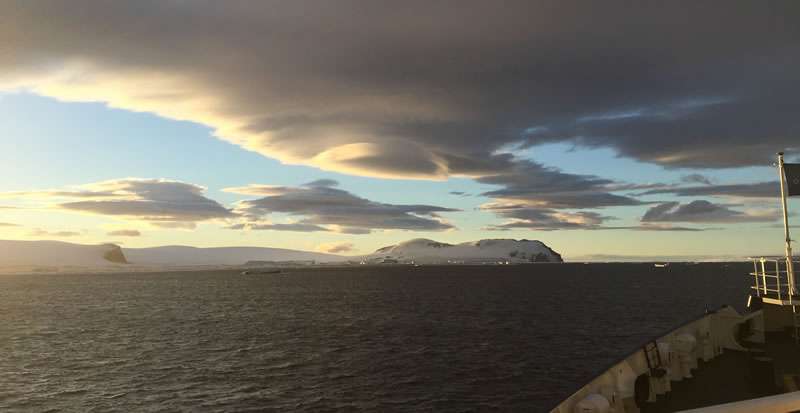 They claim it is a photo of a cloud ship or a large alien ship that uses cloud camouflage. But what interests us more is the faint picture of large buildings on the distant coast.

Whatever is going on there is clearly more than just a few scientists studying penguins.

“Many Russian and American scientists have been killed in Antarctica,” a senior P2 freemason source quotes Russian FSB and CIA reports. “I know with certainty that there are ancient alien bases,” he adds. That’s why Antarctica is closed, he says.

This is the person who informed us in advance that the P2 would have fired Pope Benedict XVI. He was also once found by the CIA near the BIS with a gun and a sophisticated lock picking device.

This source also says the earthquake that hit Mindanao, Philippines last week was caused by an attack on an enemy underground military base.

Now let’s take a look back at the here-now geopolitics that this newsletter usually focuses on and see how the secret space program is related to the recent U.S.-China partial trade agreement.

The leaders of Asian secret society have long told us that they want the United States to reveal their secret space program to them.

This was agreed in the recent trade talks between the United States and China. Therefore, the details of the agreement have not yet been published.

What was released shows that China has offered to buy additional $ 200 billion worth of goods from the United States each year.

Economists have scratched their heads because the official US economy doesn’t have the ability to export that much.

The United States will now end its germ war against Chinese agriculture as part of the deal, the CIA sources said.

The story below that attempts to accuse Chinese gangsters of drones that cause swine fever in pig farms is almost certainly an attempt by the CIA to divert the blame for these attacks.

The other thing that happened this week is the still strange movements in the financial markets.

According to a CIA source in Southeast Asia, Indonesia has suddenly announced a $ 40 billion infrastructure project that it believes is a payout to the government for granting the Rothschilds access to some of their gold.

Goldman Sachs partially confirms this by reporting that 1,200 tons, or $ 57 billion, of “unexplained gold flows” have recently been discovered.

All of this is related to growing market consensus that it will be impossible to keep going the current US stock market bubble much longer.

When mainstream publications like The Wall Street Journal say companies cook their books to make profits appear bigger than they are, the end is near.

According to P2 Masonic sources, the money is pumped into the repo market in response to a proxy war that pits Germans JP Morgan and Deutsche Bank against Rothschilds Goldman Sachs and Trump.

When we talk about the FRB, we are sad to see the death of former Fed chief Paul Volcker. I met him several times and he convinced me that the central bankers were only accused of trying to keep the money in line with the real economy, which he towered over.

What Volcker didn’t tell me was that it was his Rockefeller bosses who secretly decided how the funds created by the central bankers were distributed.

We are also finding that the topic of a jubilee, or debt relief for the average Joe, is now part of a mainstream discussion.

This is another indication of some kind of financial event that could be associated with space programs disclosure.

After the British Prime Minister Boris Johnson received an overwhelming mandate to leave the German EU, it is time for a new agreement for Europe, says P2 Freemason and British Intelligence.

A basic agreement had been reached to have Europe led by a triumvirate from Germany, Russia and Great Britain.

The British secret service also says that the permanent impeachment and “meddling of Russia” against Trump were carried out by a certain British faction.

This campaign is now being phased out. This means that the attacks on Russia and Trump will be stopped.

Our Pentagon source near Trump had the following to report this week: “Trump may need to invade Mexico not only to fight CIA drug cartels, but also to keep lithium and other resources away from Chinese hands.“

“The backlash against Boeing continues as China finally questions the safety of the 737 MAX and paves the way for a global ban on flying coffins, while the Department of Defense keeps Boeing from the $ 85 billion ICBM replacement agreement.“

The source further noted, “The 90% Christian majority show their conservative muscles against cursed J during the Hallmark Channel lesbian advertising and Brazil’s outrage at a Netflix portrait of a gay Jesus.“

Finally, we can confirm that a meeting between the British Commonwealth, P2 Freemasons, the Pentagon and Asian secret societies may be due in mid-January to discuss the establishment of a world planning agency with an annual budget of $ 1 trillion.

The establishment of this agency, an anniversary, the disclosure of the secret space program, and a financial restart will be discussed at this meeting, which P2, UK and Asian sources agree.