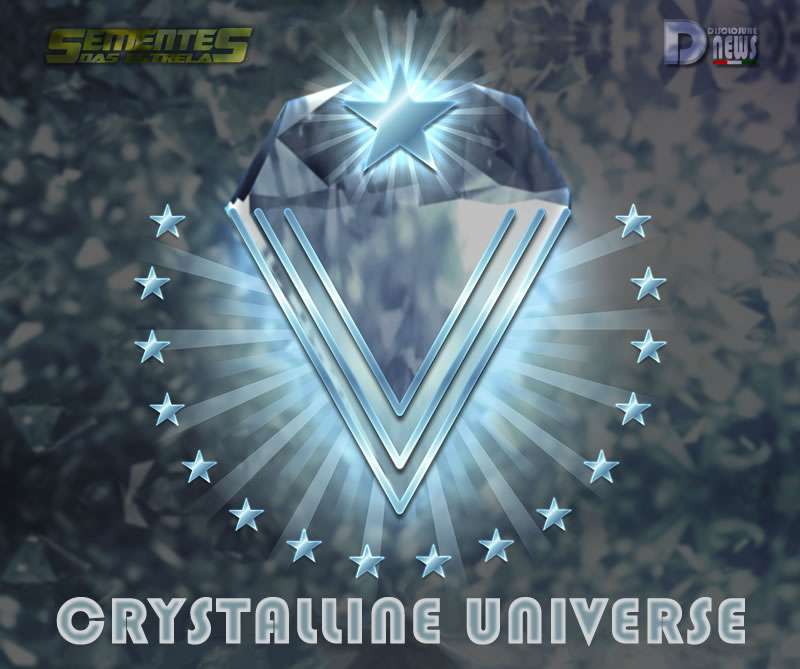 The Crystalline Universe is a Universe formed entirely of Crystalline energies. There is no condensation (materialization) of the energies present there.

It acts from the 12th dimension to the highest. All beings existing there have no humanoid, or physical, or any kind of form; they are only lights of pure Crystalline energy vibrating in bright blue light.

The frequency of this Universe is so high that anything vibrating below that particular dimension is dissolved immediately.

The First Crystalline Universe is within a Cluster composed of eight Universes, also Crystalline, created from this primary Crystalline, quoted here.

All of them acting with the same function: radiate Crystalline energy to the other Clusters of interconnected Universes. In addition, especially in the Material or Duality Universes, they ensure the equilibrium required to avoid creating a great imbalance.

They maintain percentages of Crystalline cells in the bodies of the living beings in the Universes of Form in order to keep the balance between dense and subtle matter during their experiences in dualistic realms. Within this process, when the time for Ascension of these realms comes, they accelerate the crystallization of all the cells of those present, making them purely crystalline, and capable of going to Universes with the same energetic characteristic.

All other Universes and Clusters, as said, receive direct emanations from the Crystalline Universe.

It is as if all the others receive a crystalline magnetic connection, and through it, discharges of energies guarantee that that Universe has the Crystalline percentage and the purity of the Source ideal for its operation.

Even Universes of more densified energies, or with deep darkness, have Crystalline energy in them, as well.

Another point is that the Crystalline Universe acts in waves; it is like an ocean of Crystalline Energies, purifying and elevating the Consciousness.

Thus, the Crystalline Universe is the one that makes—through the interconnection between the Universes of its Cluster, and other Clusters of the 144 Universal Clusters—an immense Crystalline grid to support this Force in all these Universes; and, of course, the Earth is part of this. 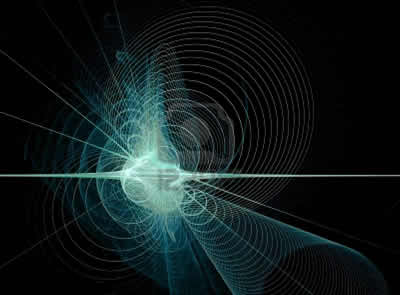 As this Crystalline grid reverberates, it connects the Earth and all its inhabitants, consciously, to the other Universes and Clusters like an immense interconnected web. 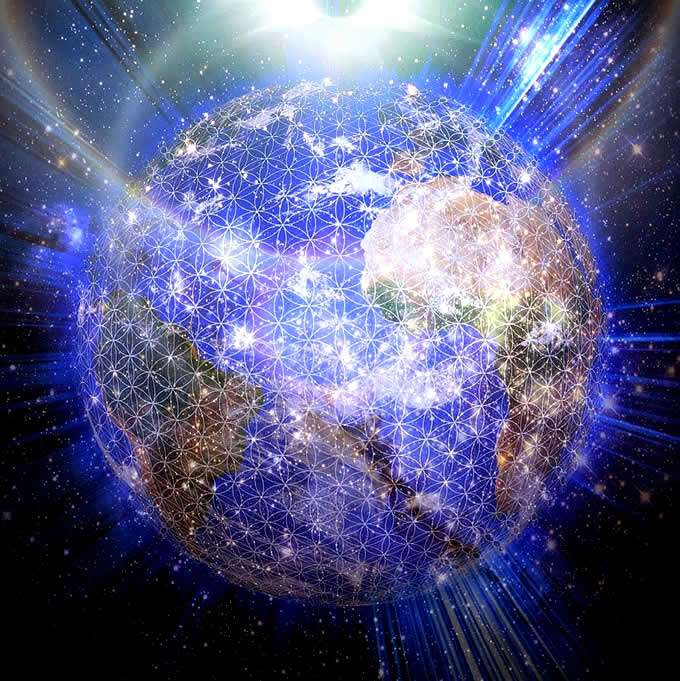 The Crystalline Grid is the energetic lattice that covers our planet. It reflects and amplifies our ascending levels of consciousness. It is a crystalline ‘light’ matrix that was anchored in 1992, five years after the harmonic convergence.

Although in place and functional, its total activation will involve 12 phases, with full resonant vibratory rate achieved on the 12-12-12…December 12, 2012.

The ‘triple’ dates (01-01-01 thru 12-12-12) that occur uniquely for the next 12 years each carry numeric light codes that open & activate each of the 12 major pentacle facets of this amazing template.

Visualize the grid as a geodesic sphere, of pentagons and triangles, sparkling as a faceted, brilliant diamond.

The Ascension or Crystalline 144 grid is anchored into the earth with two axis points. It is an emerging system, one that in truth has always been present, but not accessible, until after the Harmonic Convergence of 1987. Tremendous energy lines flow outward from the northern axis point and reenter at the southern. These energetic lines are directly connected to every sacred sites of Gaia. There are hundreds.

All beings are Crystalline, because the Supreme Source is Crystalline, but when they choose denser experiences, they come out of that most sublimated state, to which they will naturally return one day, through the natural elliptical law of return home after a journey of experience. In its different facets Crystalline Energy is all that exists.

Crystalline Energy is an omnipotent source of power, which has implications far beyond humanity’s present understanding. The Crystalline structure is formed by a Resonance essence of Light Frequency that is multidimensional and coherent, existing in matter and antimatter.

It is the divine Metatronic pattern that gives rise to all manifestations of Creation, and forms the very matrix composition of all planes of existence. It is the enzyme of the transduction of reality, and the source of the vitality of the Divine Thought, which forms the Cosmos itself. 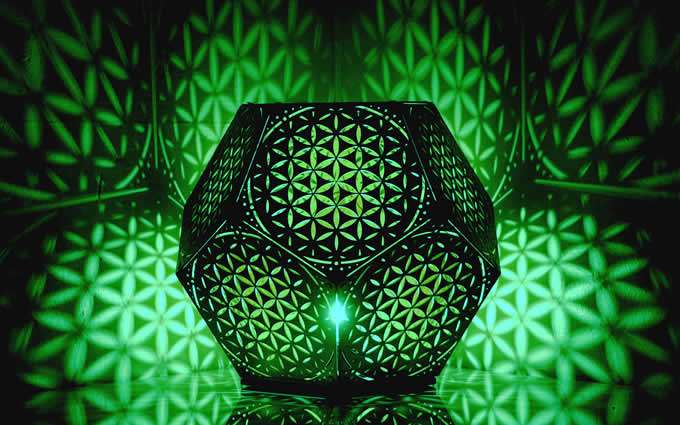 The consciousness and purpose of the Crystalline Kingdom is to deliver the divine will and power of the Creator; this manifests with qualities of magnification, cleansing, purification, activations, healing, clear vision and focus, alignment to the Creator, and generally supporting all aspects of ascension upon the Earth.

The Crystalline Kingdom harnesses the power of the Creator and gifts it to anyone who connects into their essence. They hold the purity and bliss of the Creator, the innocence that is at the core of the Creator, and remind those they connect with that the same exists within their being.

In many ways, the Crystalline Kingdom is akin to the Angelic Kingdom, or the Unicorn Kingdom. They are expressions of the Creator, and beings of service.

Our past is deeply rooted in the Earth, and our future depends on our ability to recreate a relationship with our sentient Planet. All the high thoughts that we have need to rise to the crystalline form for manifestation.

Consistent light is crystalline energy, the vitality of which is formed by the whole nature of all worlds and realities. The crystalline structure forms the apparent boundaries and divisions between dimensions, planes, and the flash of matter/antimatter consciousness, in parallel reality and in probabilities. All that we call Divine, all that we think is sacred, is Crystalline. 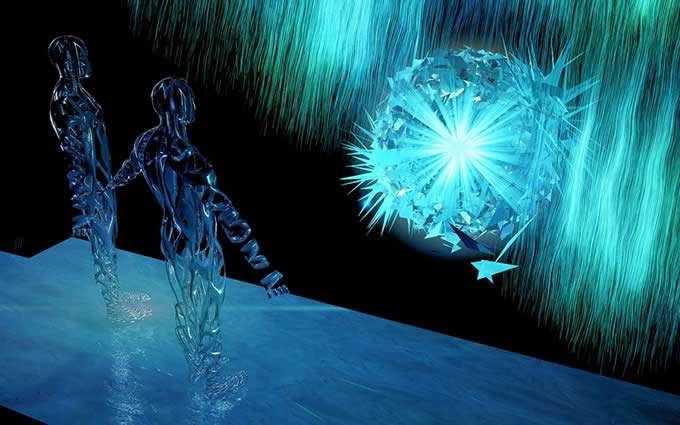 Become a Crystalline Being

The graduation of your planet, that termed the Ascension, is in effect the critical-mass that will allow for the conversion of this Earth’s receiving-capacity template from, in your vernacular, analog to digital, and from black and white to color.

The Crystalline Conversion through the antennae of the 144-Crytsalline Grid is about to vastly increase the earth’s dimensional reception from 3d to 12d, and beyond. It is akin to your television changing from the archaic antennae to satellite reception. It is the Crystalline Age. The fulcrum apexial point is the      9-9-9 of the Cosmic Trigger. It is a lot of energy to manage.

Atthis time of the Ascension, in this New Crystalline Era, the mega power crystals will not be taken from you and misused, as occurred in the sad demise of Atlantis. Indeed, they will never again be used for any purpose other than the highest good. And so, we speak again of the Atlantean Master Crystals that are now awakening in the dawning of the planetary Ascension.

During the time of Atlantis, many large and powerful crystals where placed into the Earth, not only into the land of Atlantis, but also into other areas of the Earth. These were known as the Atlantean Knowledge Crystals. The Atlanteans, themselves, anchored these twelve crystals from the inner planes, transforming them into semi-physical large crystals holding tremendously high energy vibrations.

These crystals were large boulder-like crystals that could only be moved with the power of the mind. Each crystal had its unique color and sacred geometry shape. They are the Celestial White Beings assisting in the manifestation and anchoring of these twelve crystals of light. They, and the Atlanteans who anchored the crystals, understood that the crystals would have meaning and purpose in future civilizations, becoming of great significance when a larger number of the Creator’s souls inhabited the Earth.

These souls are sustained by the powerful crystalline energy coming directly from the Crystalline Universe. Other infinite crystals are on Earth today, and each of them anchors this Crystalline Energy.

Having crystals at home, and directly requesting the Crystalline Universe to feed them with Crystalline energy, will help greatly in harmonizing environments through these energies.

An infinity of beings of the Crystalline Universe has been incarnating in the Terran plane since 1984. From the year 2000, the quantity of these beings descending from the high crystalline spheres drastically increased, to act in the new generations of the Terran Plan. 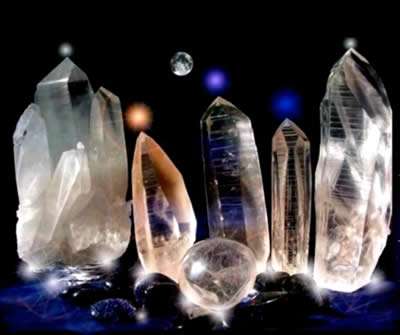 Many Crystalline Masters are incarnated at the moment(2018), and are already anchoring the energies that will reverberate in the next years and decades. One of these great Masters, who projected a ray of his consciousness into incarnation, is the one called Enoch.

Other beings that are well-active in the astral zones, and already sending some of their members to incarnations in the Terran plan, are those called Adamantins.

There is much more to say about the Crystalline Universe, but this is enough to give an idea of ​​the Power that we have in our hands, thanks to the grand support of these purely Crystalline beings who constantly support us, inspiring purity and lightness, innate characteristics reverberated by these connections.

Dear beings, coming, and reverberating from, this Crystalline Universe, you now know the importance of your existence and Power. You are the expression of Purity, Harmony, Subtlety, and Lightness in all the Universes, and at this time, the Earth, in particular, is grateful for your emanations and Crystalline presence.

A Geometric Symbol that represents The Crystalline Universe was channeled by me, Gabriel RL, the one that illustrates this post. It is a symbol that, when looked at for some time, will help in accelerating the crystallization process of your cells.

Beloved Crystalline Being, your motto is: “I AM CRYSTALLINE PURITY, REVERBERATED IN ETERNAL AND INTERCONNECTED MULTIVERSES.”