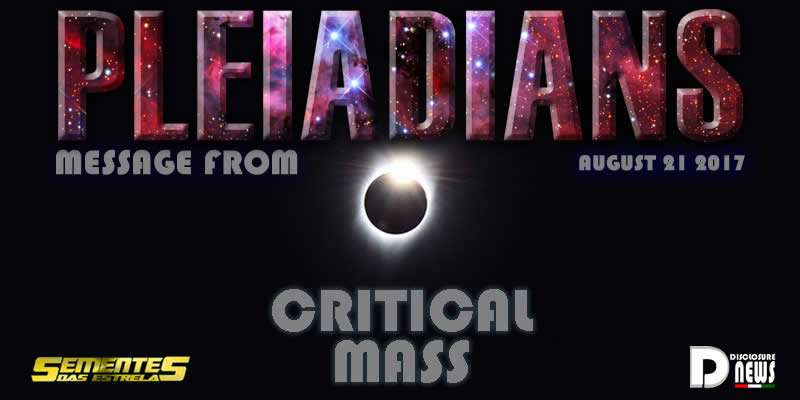 Message from The Pleiadians August 21

Critical Mass Achieved Message from The Pleiadians. By Gabriel RL.

The Pleiadians report, Critacal Mass Acieved! With that, large cracks in the Veil happened. Not just cracks, but considerable holes.

And through these holes more ships of the Galactic Federation could get closer to the surface thanks to the burning down of Chimera devices that caused them, the Chimera, to detect too many approaches of the Federation Ships and as a result they retaliated.

The critical mass guaranteed the formation of an immense Pink Light Vortex that swept the entire planet and radiated throughout the Solar System.

The vibration of the Unity achieved by the dedication of souls of the Earth, fosusssed and with great love, caused that vibration to reach the 13th Dimension definitively attracting the eyes of the CENTRALS and the total support to the desire of the unified humanity to achieve its leap.

The Yaldabaoth entity has been drastically affected by a crystalline wave thus reducing by half, one can say, the time until the manifestation of the programmed Event.

As a consequence, on the surface of the planet more arrests will occur to those who still supported the old energy: media dominated by the old order.

Many of these media will begin to change their information because they will start to realize the importance of the good news and how it affects an everything.

There is also more opportunity for twin souls to meet, thanks also to the immense capacity they will now have, to transmute their emotional issues, their negative debris that hinders their approach and ultimate Unity.

More information will come through various means, giving confirmation of the unity of information.

Note: A Pleiadian was in the room with the team at the time of meditation. His name was Ala-i.