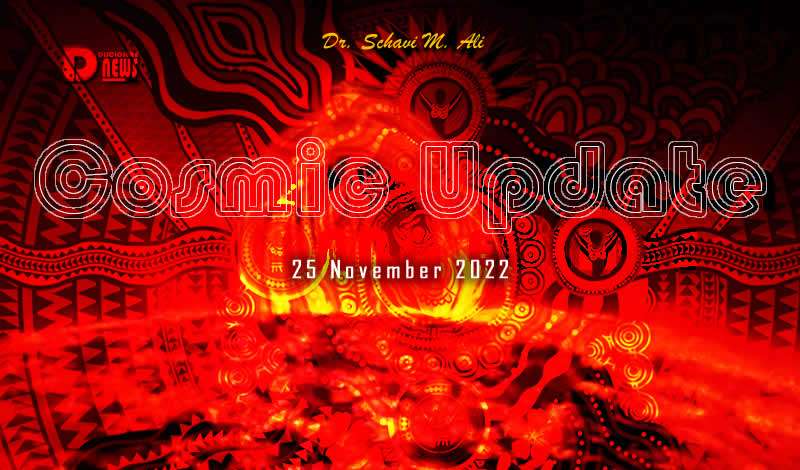 A magnetic filament that erupted from our Sun on November 19th has arrived as of today, Friday, 11/25/2022.

It has, of course, unleashed a coronal mass ejection (CME)—proton and electron plasma particles. All flares— whether they are massive explosions or filaments— carry CMEs because our Sun is comprised of plasma.

Thus, when plasma erupts from it, that is a CME—small or large, and it is sent soaring throughout our solar system by solar winds.

Today’s winds are fluctuating with powerful medium to fast energy traveling at this time of 12:51 PM (EST) at approximately 511 km/s—very much over the normal speeds of between 300 and 400 km/s.

However, only “B-Class” and “C-Class” flares are being reported. This rating could go higher later.

Thus, the CME is packing quite a punch to our planet’s magnetosphere with plasma particles densely and potently enveloping it.

There have been 106 earthquakes in the previous 24 hours with a strong “5.7” in the Solomon Islands.

Neutron counts remain as they have been for several weeks—in the “Elevated” status.

Cosmic events are occurring daily—sometimes very escalated in power and sometimes slightly lowered in intensity like dance moves on a stage or like music that is upbeat at times and slower at times.

However, the “show” is always occurring.

The “doors” are open to the “Cosmic Theater” 24 hours. There is no closure.

Earth/Gaia is never “Quiet” as some scientific devices report.

There is always movement, stirrings, upheavals.

As I have mentioned before concerning cosmic events quoting the narrator in the Charles Dickens novel entitled A CHRISTMAS CAROL: “We do but turn another page”.