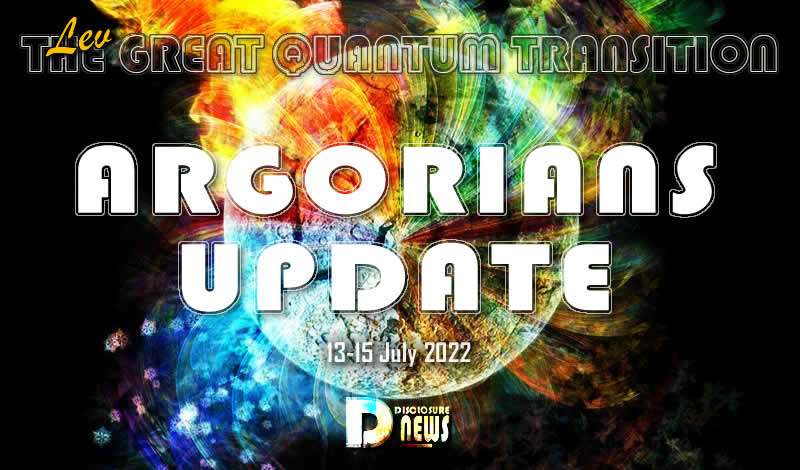 On July 13-15th, 2022, the Argorians’ fleet and the Siriusians’ tracking station on the Moon transmitted new monitoring data of Earth and earthlings. Below is a summary.

Once again, Argorians and Siriusians urged to immediately stop all mass meditations on Earth.

The reasons are the same that were voiced earlier and caused the strongest hype no matter how many times the reasons were explained.

The energies of the participants in such meditations are extremely heterogeneous and mostly polar. This explosive mix leads to destruction in the Earth’s power field, increases the clots of negativity in it, which all Black egregores and other parasites feed on the Subtle and physical plane, prolonging their existence. 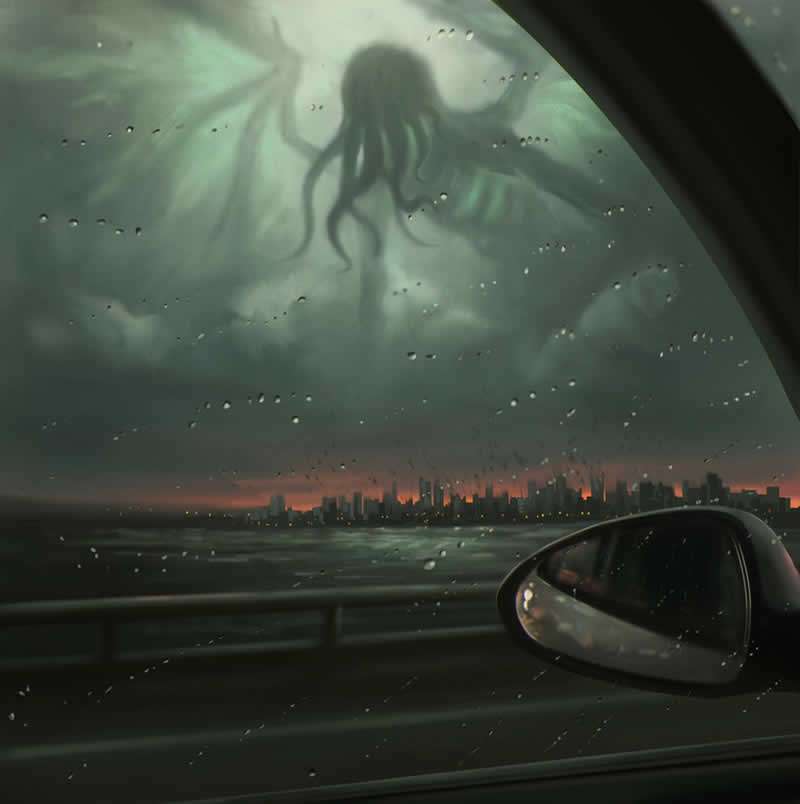 Currently, the energy and matter of the 3D Earth are actively being removed for processing into part of the multidimensional fractal of the planet, combining the sixth, fifth and fourth densities where the 5D Matrix is being completed.

The new crop circle in Wiltshire, UK informs about this: in a 6D space, the planet’s communication center and a Hologram change, unite and upgrade the 3D worlds of Nature.

Strong bursts of the energies of mass meditations destabilize the transforming currents, the general field of Earth, cause sudden temperature spikes and amplify earthquakes. 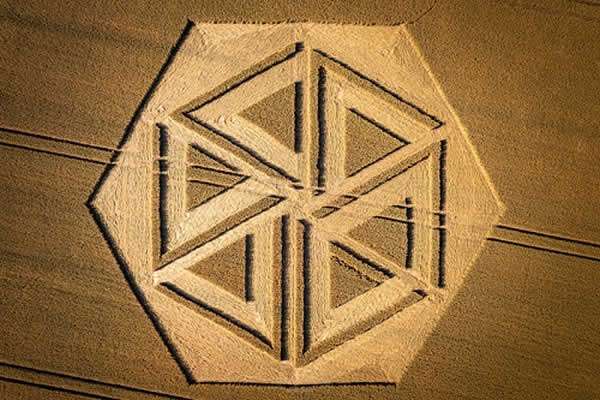 The anomalies that earthlings are observing now are manifested by forest fires in some regions, floods in others, severe drought and crop loss in the thirds, volcanic eruptions in the fourths, daily earthquakes in the fifths.

This week, record temperatures have set in the UK, Portugal, Spain, Italy and France, and relief is not expected.

The hot will worsen the ongoing forest fires in the south-west of Europe. In 14 states of Portugal, in the east of Spain and the UK, the 3rd level of the heat warning is in effect until the weekend, the highest possible.

This is how quantum flows coming through the Sun from the Galactic Center rearrange the energy of the planet. 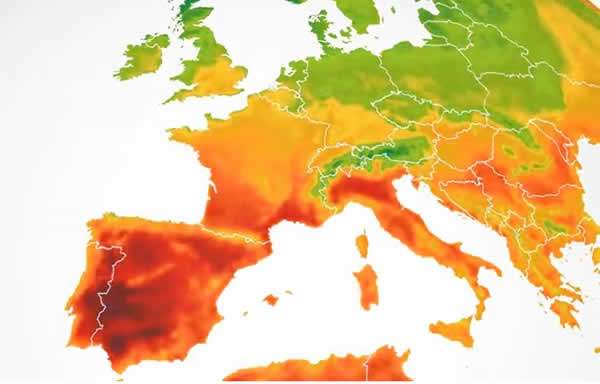 In addition to constant negativity, another source of destabilization of the Earth’s field, which people blindly and stubbornly create, only hinders.

FROM NOW ON, ALL THE ENERGIES OF MASS MEDITATIONS WILL AUTOMATICALLY RETURN TO THEIR SOURCE POINT.

The space squadron of 25D Argorians helps to run quantum flows coming to Earth, splits 3D atoms into particles, accumulates 4D and 5D energy in the Earth’s power field, according to Time programs, and cyclically saturates the aura of the planet with five-dimensional plasma. 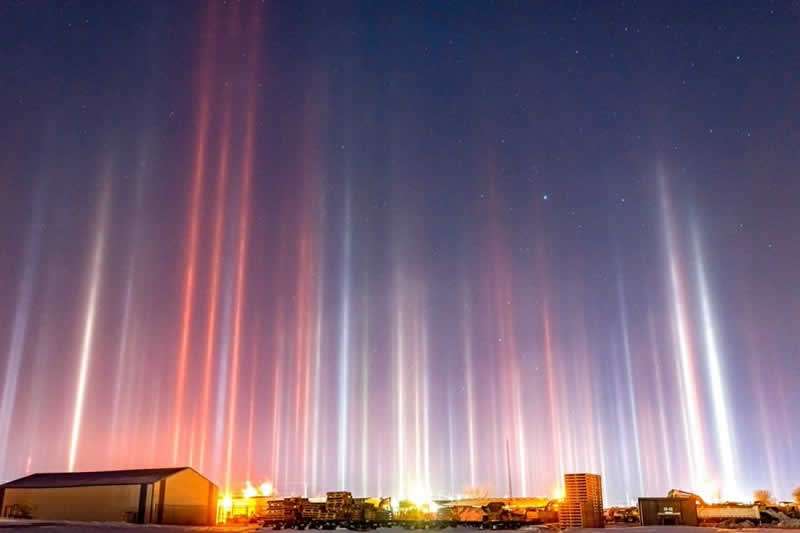 This is reported by crop circle in Hampshire, UK: by the force field of the communication center, the Earth’s core cyclically opens Portals for the release of information energy of an outdated, 3D, life support system. Codes for the materialization of new 5D programs are loaded through the same Portals.

The reconstruction of the Earth’s 3D crust is performed by an ultrasonic transducer of five-dimensional space energy.

Time spin increases the transmission of new cosmic flows to Earth. The stream of Time has accelerated. The days are no longer 24, or even 16, but 12 hours. So the point of no return to 3D is approaching.

The superimposition of Galactic pulsars’ radiation and the stratification of Time flows strengthen the energy shield of the planet, helping its transformation.

The spatial pulsation of force fields transforms human bodies at the atomic-molecular level. This helps earthlings to move to a new level of development and Intelligence.

Many deep processes are caused by wave vortexes, which accompany the formation of people of the Sixth Race. 5D energy accumulates in their individual capsules-spheres, expanding the range of their evolution in the fifth density (for more information about these capsules, see Operation Life Matrix, DNI, January 26, 2022).

As of July 15, 2022, another large group of earthlings became ready for the Transition to 4D, increasing their vibrations to the necessary frequencies by inner work. It’s approximately 35% of the total number of transients. 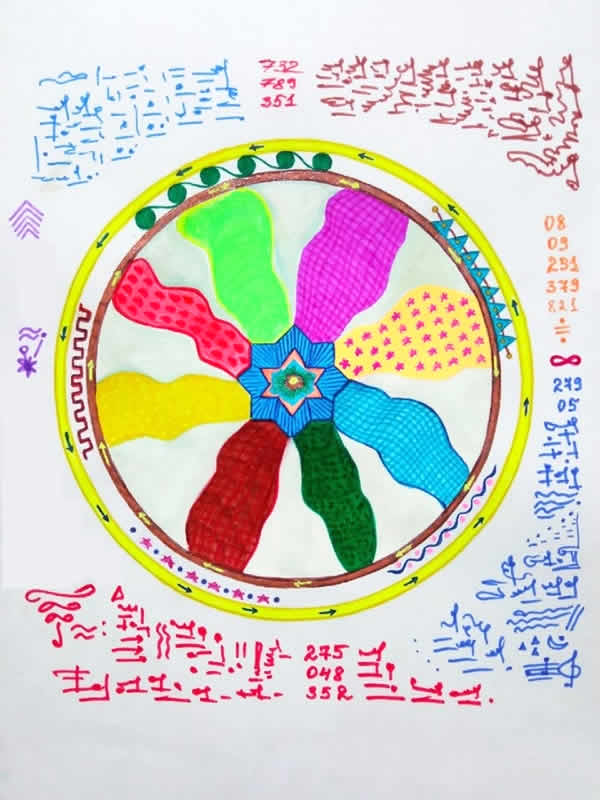 The waves of fiery Solar storms lay open all the weaknesses of the human body. Its cells vibrate at a certain frequency, and a new spectrum is added to it.

The cell aging program is being reset. Temporarily, it creates chaos, then, follows stabilization, and adaptation.

All non-transformed areas of the body, all blocked chakras, fail. This is as it should be – the physical and Subtle Bodies change gradually.

So they are settling down to live in a new mode, until the next increase in vibrations. And it will be like this all the time.

How one can help self? First and foremost, it’s necessary to remain calm and cool-headed. If inner sensations bring silence, so everything is in order. The body trembles, the Spirit is carried up.

It is very desirable really listen in utter internal quiet, and to be tuned into the right wavelength. 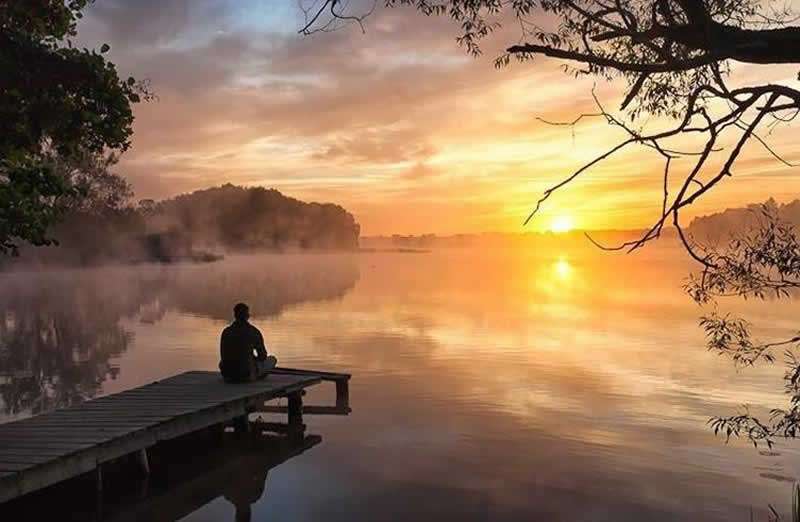 In The Right Wavelength

In such cases, traditional medicine is useless. Chemicals only bring down the subtle settings of the body. It’s not easy for the corpus to sync with incoming quantum flows, and it still has to cope with extraneous elements.

Maintaining calm, if there are no emotional reactions, the energy is not blocked in the body, and gradually begins to circulate in a new range.

The physical body needs completely different things. In the new, high-frequency energies, heavy food are not good for it, other nutrients are required – everything that is natural, alive.

Charged water can substitute many medications. It simply loaded by the necessary information about healing, and it effectively works inside the body, in the aquatic environment of cells. In the same way, purification takes place. Thought comes to the fore; it can change a lot of processes.

Solar flux primarily enters the upper chakra and the glands of the brain. Its active restructuring can cause increased pressure or headaches. 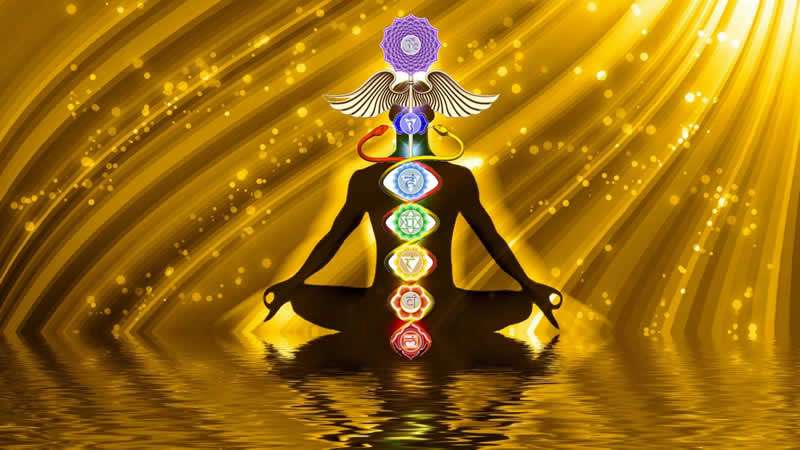 Sunbathing now is not only unnecessary, but also dangerous. It is important to observe the inner feeling in the sun. It’s an important source of change, but now elevated frequencies are coming through it, for which the bodies of many are not quite ready. In such peaks, it is better not to be in the sun for a long time.

Many men have begun to notice how the information light becomes literally tangible. That is, previously hidden info is floating in space, and people catch it. It is a stream that expands consciousness.

More and more things come within reach to what earthlings could not even imagine. For example, the mental messages from above on what needs to be done and what not. This is the Higher Selves’ hints.

In this mode, everyone will reach the main quantum leap. In peace and trust in his Spirit. 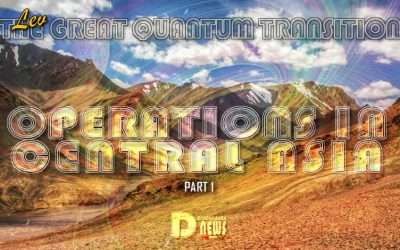 From October 17 to November 14, 2022, under the Co-Creators’ run, the Lightwarriors’ ground team conducted a series of important operations in Central Asia. They eliminated some consequences, remained after of the Pleroma’s split the shadowy past (see DNI, Operation 4th Universe, Parts 1-10), and the restored its structures on our planet for transition to 5D. 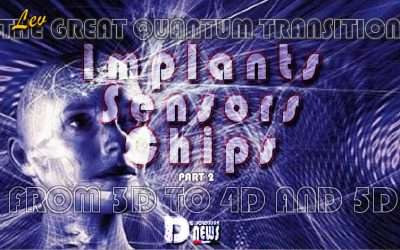 In addition to the implants described in Part 1 (see DNI, 21 November 2022), the 3D System widely use of other plug-ins. 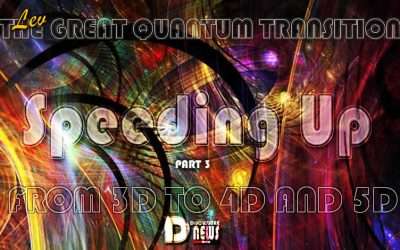 Without exception, every awakening consciousness falls under the harsh pressure of the 3D System. The main methods of influencing unwanted people are money, relationships and health. 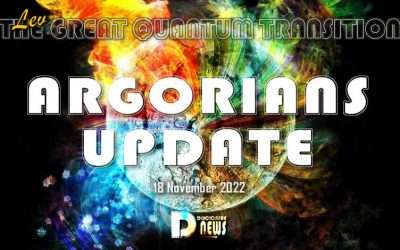 On 18th, 2022, at 9:42 AM CET, Argorians’ space fleet and Siriusians’ Lunar base in 23D conveyed the following Earth’s monitoring data: “On the plateau of the pyramids of Giza, the intensive movement of the brown GASIG energy continues destroying 3D structures and prepares space for 5D. The orange-gold ERCADO discharges give an impulse of power contractions and forms temporary programs. 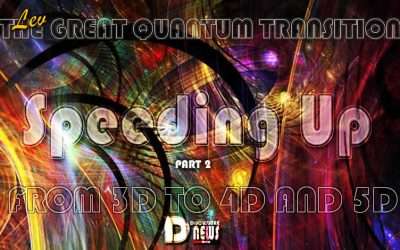 Our consciousness is run not by the events themselves, but by how they are presented. It often develops by media, sites, bloggers, opinion leaders, etc., who share their “important” point of view. Each of us who feels sorry for selves or our loved ones in what is happening and wants “world peace” is also vulnerable, as is anyone who attacks Reptilians, Dracos, Nazis, Xi, Biden, Trump, Macron, Putin and so on. 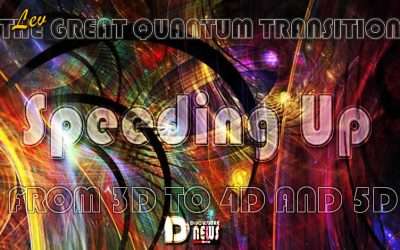 In November, all events on the physical and Subtle Plane accelerated dramatically. This is especially noticeable in our daily life. The problem of static electricity has worsened. We get discharges from almost everything. Mostly it is metal, less often rubber. 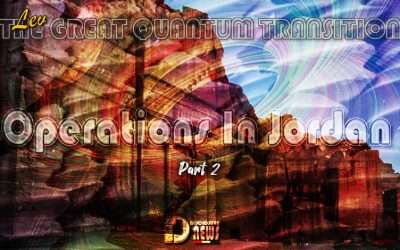 On the way to the Dead Sea, Lightwarriors stopped in Bethany (or Al-Magtas in Arabic), where Co-Creators assigned them to carry out two important operations. Bethany beyond the Jordan (this is full name of the place) is sacred for all Christians. John the Baptist lived here, Jesus Christ was baptized and Elijah the Prophet ascended. 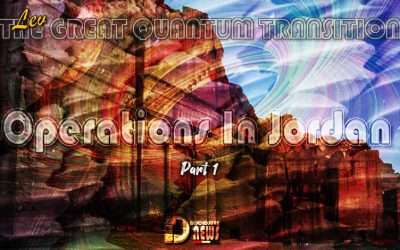 The Lightwarriors ground team’s operations in Jordan were focused on solving the Earth’s cosmo-energy, inherited from the past. These days, they still pose serious obstacles for the Transition to 4D/5D. Additionally, on the instructions of Co-Creators, Lightwarriors conducted a number of local ops. One of them was the revival of the Jordan’s national egregore. 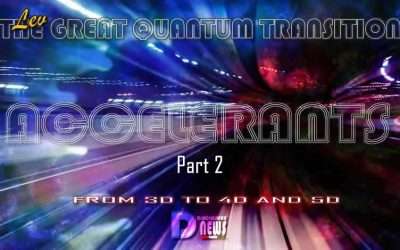 Taking into account the space weather in November and the transfer of Earth into a short controlled chaos, Argorians changed the scheme of the quantum flows impact on Earth and Earthlings. On November 4th, 2022, at 9:21 AM CET, the command of the Argorians’ space fleet conveyed and explained how a new pattern now works on a planet’s Subtle Plan.